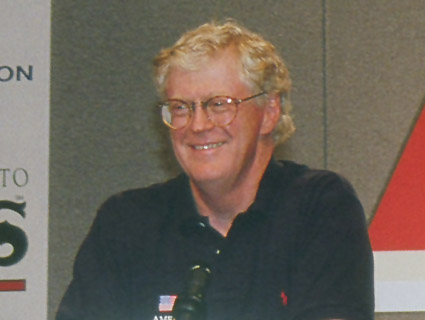 Bill Koch at an America's Cup press conference in 1992.<a href="https://commons.wikimedia.org/wiki/File:Cayard-Koch-Melges.jpg">Wikimedia Commons</a>

Now that he’s given $2 million to the main pro-Romney super-PAC, William Koch has joined his brothers David and Charles as one of 2012’s top conservative moneymen. Bill, David’s twin, also made much of his money from his family’s energy holdings, though he’s not quite as rich as his better-known siblings. Forbes puts his net worth at $4 billion, versus his brothers’ combined worth of $50 billion, the result of a drawn-out legal battle over the family fortune that left Bill and the eldest Koch brother, Frederick, behind.

Though he’s given money to Republicans such as Rep. Allen West (R-Fla.) and has used his company, Oxbow Carbon, to lobby against wind turbines off Cape Cod, Bill has not gotten involved with his brothers’ shadowy political fundraising operation. “Bill Koch isn’t Charles Koch and he isn’t David Koch,” his spokesman told the Village Voice. “He’s not his brother’s keeper.”

What Bill Koch does like to keep: Wine and art. According to Antiques and Fine Art, Koch’s Florida house has a “computerized wine cellar” that provides “easy access” his collection, whose size has been estimated at somewhere between 35,000 and 43,000 bottles. Koch once believed he possessed bottles of French wine signed by legendary oenophile Thomas Jefferson, but he later claimed they were bogus and sued the dealer and Christie’s auction house. Last year, Koch told the Economist that he has spent $4 to $5 million on fake wines. He did not say how much he has spent on his ongoing lawsuits (five at last count) against the alleged purveyors of counterfeit wine.

Koch also has an extensive and eclectic collection of fine art, including works by Monet, Chagall, and Winslow Homer. Not content to let his favorite pieces collect dust, Koch seasonally schleps them to and from his summer home. As AFA explains:

Koch annually chooses artwork from his 400-strong collection to transport from his 40,000 square foot primary residence in Florida to the Cape Cod beach house. At a third of the size, the summer home accommodates only a careful selection. Thus, favorites such as enormous Fernando Botero sculptures, Alfred Stevens’s engaging The Coquette, and much of the maritime collection (excluding over 120 boat models of every defender and challenger in the America’s Cup), travel north while the majority of Koch’s trove stays behind.

Koch’s other passion is sailing. In 1992, he won the America’s Cup at a reported cost of $68 million. “Financially, I would say win or lose, it’s not worth it,” he told ESPN. “If you asked me…if I knew what I know now, would I do it, the answer to that would be no.”

“Wild Bill” also has a thing for the Old West. In 2010, he quietly purchased Buckskin Joe, a Colorado town/movie set/tourist trap, and relocated its buildings to his ranch. Last June, he spent $2.3 million on the only authenticated photograph of Billy the Kid. That’s still $300,000 more than he’s spent on Romney, one of his cheaper hobbies.