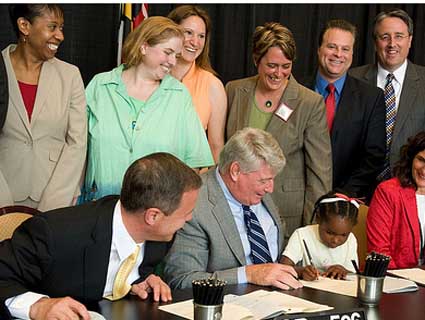 The daughter of a Maryland state senator adds her signature to the legislation extending certain rights short of marriage to same-sex couples in the state.<a href="http://www.flickr.com/photos/terrancedc/2527941968/sizes/m/in/photostream/" target="_blank">Flickr/TerranceDC</a>

The Maryland Board of Elections officially certified on Tuesday that opponents of the state’s recently passed same-sex marriage law have enough signatures to put the matter to a referendum. That means voters will decide in November whether Maryland’s same-sex couples have the right to get married.

Opponents of same-sex marriage in Maryland exceeded the number of required signatures by an order of magnitude. According to Maryland law, it would have taken about 56,000 signatures to put the law to referendum. Marriage equality opponents put forth more than 160,000, only about six thousand of which have been invalidated so far. Now both pro- and anti-same-sex marriage groups will be able to set up ballot committees whose funding won’t be released to voters until October, shortly before Marylanders vote on the law.

For once, the National Organization for Marriage, America’s main anti-marriage equality group, may be operating at a disadvantage. Black Marylanders once supported banning gay marriage, but that changed after President Barack Obama endorsed marriage equality. While earlier polls showed more than 50 percent of black voters opposed to same-sex marriage, the Democratic-leaning polling firm Public Policy Polling found in May that a majority of black voters now support same-sex marriage rights. And even before black voters flipped, polls showed that Marylanders overall opposed banning gay marriage.

Maryland’s marriage equality law isn’t set to take effect into 2013. Wade Kach, a Maryland Republican delegate who supported the marriage equality bill, nevertheless added an amendment to the bill ensuring no marriages would take place before marriage equality opponents could contest it via referendum. Kach was concerned about the recent federal court ruling that found California’s Proposition 8, the ballot iniative that stripped Californian same-sex couples of their marriage rights, unconstitutional in part because it took rights away that had already been given. This way, if Marylanders ban same-sex marriage, marriage rights advocates won’t be able to use that same argument in court because no same-sex couples will have been able to get married yet.

Marriage equality opponents have reasons to be confident. After all, they’ve never lost a referendum. On the other hand, it’s looking very possible that Maryland will be one of the first states to buck the trend.