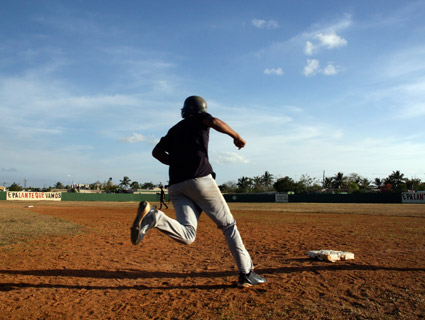 In the riveting new documentary film Ballplayer: Pelotero, there’s an early scene in which four Dominican teens are sitting in a spartan dorm room, shooting the shit about the future they anticipate as professional players in the United States. They joke about how their countrymen play with more flair than Americans and venture that Dominicans are harder workers and more talented than their northern counterparts. Then one of them gets serious. “A lot of us have pulled off tricks so we can sign,” he says. “People change their ages and all that. But that’s just what you have to do.”

For years, that sentiment—you do what you gotta do—has pervaded baseball in the Dominican Republic, home to 11 percent of major-leaguers, 24 percent of minor-leaguers, and a not-insignificant percentage of the game’s recent scandals. Baseball is seen by many young men and their families in the Dominican as a way out; nearly 3.5 million people live in poverty (including some 1 million who subsist on less than $2 a day), and that sense of desperation has helped contribute to steroid abuse and widespread age and identification fraud among would-be players, often with the help of exploitative talent brokers known as buscones.

In the film, directors Ross Finkel, Travor Martin, and Jon Paley zoom in on two players, highly coveted Miguel Ángel Sanó and under-the-radar Jean Carlos Batista, as they train in advance for the big day: July 2, the first day that Dominican 16-year-olds can sign a contract with a big-league club. They go behind the scenes à la Hoop Dreams to illustrate just how shady the recruiting process can get in Major League Baseball’s favorite feeding ground.

Sanó’s story is particularly disturbing. In 2009, the slugging infielder was poised to break the international signing bonus record set a year before, but suddenly teams started to be scared off by whispers that he was older than he claimed. (As Sports Illustrated‘s Melissa Segura pointed out in January, 16-year-olds from Latin America draw significantly higher bonuses than do older prospects, mainly because teams will pay a premium to be in control of an extra year or two of a young player’s career.)

The film’s engrossing fly-on-the-wall coverage of the Sanó saga shows how invasive—and cruel—MLB can be during its Dominican identity investigations. While his mother was peppered with questions of a past miscarriage, Sanó went through DNA testing and bone scans to prove he was actually 16. Following a meeting at the MLB office in Santo Domingo in which an investigator suggests that signing with the Pittsburgh Pirates would end the stressful age probe, Sanó’s handlers become convinced that the Pirates’ Latin American scouting director, Rene Gayo—a roly-poly, mustachioed sort with a penchant for Hawaiian shirts (read: villain)—spread the age rumors to deflate Sanó’s value. That way, they reasoned, Gayo could swoop in and sign the top-level talent on the cheap.

They also feared that MLB was in on the plan. “Let me very clear about this: There’s only one MLB,” a Dominican baseball official later tells Sanó’s camp. “It’s a monopoly. And it’s their monopoly.” At one point the Sanó family sets up a hidden camera to record a meeting with Gayo, hoping he’ll slip up and incriminate himself. The results are eye-opening.

Sanó, now with the Minnesota Twins’ Class-A farm team, made headlines last week, telling USA Today that he believed “money was exchanged under the table” between Gayo and MLB’s lead investigator. MLB has waved off Sanó’s allegations and dismissed Ballplayer: Pelotero, saying it contains “inaccuracies and misrepresentations.” As commissioner Bud Selig told the Boston Globe, “We spent a lot of time in the Dominican Republic, and the people that are down there, as well as those up here, are satisfied we’ve made an enormous amount of progress.”

Perhaps. But as MLB points to its efforts to crack down on fraud and rein in signing bonuses in the run-up to a potential international draft, Gayo’s own response to the filmmakers’ request for comment is telling: “Everyone involved was guilty of doing what their job descriptions demand, and unfortunately this created confusion for the Sanó family.” In other words: You do what you gotta do.

Ballplayer: Pelotero gets a wide release on Friday, August 13. The film is not rated. Click here for local showtimes and tickets.