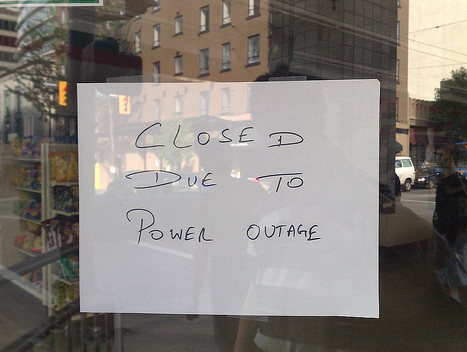 The wild storm that hit the mid-Atlantic last weekend is still creating hardship for many, as nearly half a million people remain without power and temperatures are still hovering around 100 degrees. There’s nothing like a disaster to bring class disparity into stark relief, as an email I received on Thursday morning shows.

Rhonda Bush, 31, lives in Rainelle, West Virginia, about 30 miles northwest of where the Greenbrier Classic tournament is currently underway at a luxury golf resort despite the storm. She noted that while the resort was up and running in time for the event, which featured golf luminaries like Tiger Woods, average residents on the other side of the county were feeling “ignored and neglected.” (Greenbrier owner Jim Justice responded to criticism for continuing the tournament earlier this week, offering to donate resources to people in need.)

Here’s part of the 1,009-word missive that Bush tapped out on her cell phone:

Over the last 4 and a half days, I’ve seen families struggle over what to eat when most of the food has spoiled. I’ve personally had to wait in line for gas, praying they wouldn’t run out before I got my fill. I’ve taken cold showers because there is no hot water. I’ve gone hunting for elusive ice that has become worth more than gold, and not found any. I’ve seen fights break out over basic necessaries, because nerves are becoming frayed from the stress of the heat and lack of water.

While my family has been lucky enough to even HAVE water, most people don’t because they live in rural areas that use well pumps that don’t work without electricity. Yet those first few days, even we worried our water would be cut off. I’ve seen grown men cry when they’ve received water, because they’d gone without and their families needed it desperately.

We pray for rain to come relieve the heat, then when it finally comes, we pray it won’t leave us worse off than we already are. We pick at our food during the day because it’s too hot to eat, then gorge at night and suffer for it because our bodies aren’t used to food, or worse: because the food has turned and we ate it anyway because that’s all we have and we’re hungry.

We’ve learned to make do with little because no one cares about us. All anyone cares about is a golf game that ultimately is meaningless and rich people who never suffered a day in their life. Senator Joe Manchin visited us yesterday and we talked his ears off because he was the FIRST and ONLY person in power to come check on us. I don’t agree with his politics, but he won my respect for that.

When AEP trucks finally arrived in town yesterday, we cheered because while we knew power wouldn’t be restored that night, we knew it would be soon.

Bush did write back again later in the day to report that her power came back at 4:30 Thursday afternoon.

Her email got me thinking about climate change and extreme weather. A number of press accounts have noted that while it’s difficult to say whether and to what extent climate change played a role in creating this high-power storm, what’s clear is that we can expect more of this type of extreme event as the world gets hotter. The same is true for the wildfires raging in Colorado. To me what’s most interesting is not the question of whether there will be more of these events—since there surely will be—but whether we’ll be ready when they come. It raises serious questions about societal preparedness, how we decide to allocate our limited resources, and how we treat each other.