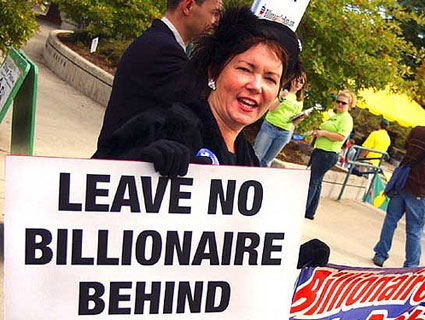 The big debate in Washington right now centers around whether or not to “tax the rich.” This week, Senate Democrats passed a plan to cut income taxes on the middle class while increasing them on families that make more than $250,000 a year. Next week, House Republicans will push through a bill to extend (the erstwhile “temporary”) Bush-era tax cuts for the middle class and the rich. But scratch beneath the surface of these dueling tax plans, and it quickly becomes clear that the GOP isn’t the only party in Congress that wants to help the rich get richer. As Ezra Klein notes at Wonkblog, the cumulative effect of Democratic tax proposals will most likely be a $17,000 tax cut for the top 1 percent of earners (compared to a $75,000 tax cut under the GOP plan). Here are four ways that the Democratic tax plan would benefit the wealthy:

Extending most of the Bush income tax cut 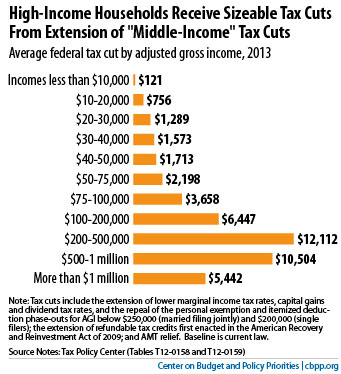 By extending the Bush tax cuts for people who make less than $250,000 a year, Democrats are still giving a tax break to a lot of people who are wealthy by any reasonable definition. As New Republic’s Timothy Noah points out, anybody who makes more than $110,000 resides in the top decile (i.e. top 10 percent) of US incomes and probably shouldn’t be called middle class. Moreover, Democrats are only proposing to increase the marginal tax rate on $250,000-dollar incomes, which means that if you make a million dollars, you still get a tax cut on the first quarter million. In the chart to the right, the Center for Budget and Policy Priorities calculates that the biggest winners from the Democratic tax plan are people who make between $200,000 and $500,000 a year.

Extending a major cut in the estate tax

Faced with opposition from conservative members of their own party, Senate Democrats dropped a proposal to restore the estate tax to 2009 levels, when it applied to estates worth more than $3.5 million and maxed out at a rate of 45 percent. (Under current law, the estate tax exempts property worth less than $5.12 million and tops out at 35 percent). The price tag for this gift to the wealthy? A cool $21 billion—almost enough to cancel out the additional $28 billion to be raised by boosting income taxes on high earners. 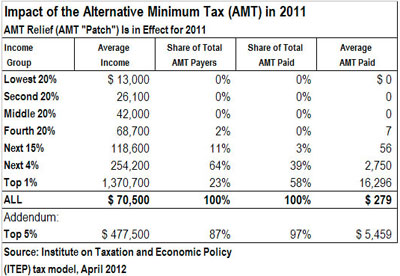 The alternative minimum tax, or AMT, is designed to make sure that people who benefit from certain tax loopholes pay at least a minimum amount of tax. The AMT is not popular with rich people, which might be one reason why in recent years Congress has always passed legislation temporarily increasing AMT exemptions. Matthew Campione of Forbes estimates that this year’s exemptions will be worth a whopping $100 billion. Citizens for Tax Justice has illustrated who benefited from last year’s AMT exemptions (see chart).

Extending a tax cut on stock dividends and capital gains

The main reason that Mitt Romney paid an effective tax rate of just 13.9 percent in 2010 was that most of his income was taxed at the capital gains rate, which Republicans under George W. Bush had slashed from 20 percent 15 percent. He also benefited from a Bush-era reduction in the tax rate on corporate stock dividends to 15 percent from a much higher top rate of 39.6 percent. President Obama wants to partially reverse those changes, applying the higher pre-Bush rates to all capital gains and corporate dividends income that falls into the top two tax brackets. But Senate Democrats wussed out, passing a bill with much smaller increases in those tax rates. Citizens For Tax Justice illustrates how the Senate’s changes benefit the wealthy: 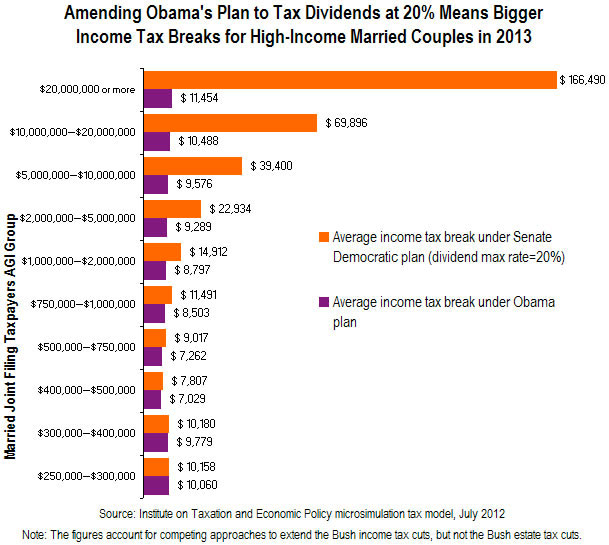