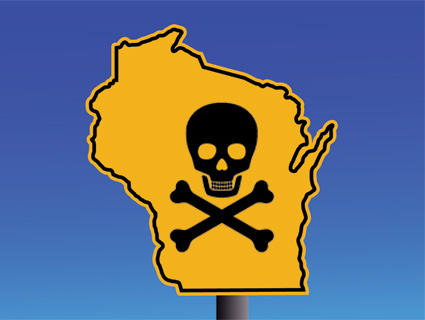 Wisconsin’s June 5 recall election is a national battle on a statewide stage, a proxy war pitting Democrats against Republicans, liberals against conservatives, unions against big business. The man tracking the tens of millions of dollars being spent to win that war is Mike McCabe, Wisconsin’s political money guru, who runs the Wisconsin Democracy Campaign out of nondescript office blocks away from the state capitol in Madison.

McCabe has watched the political money wars in Wisconsin for decades, but in recent years, he’s seen state records fall like dominoes: $20 million spent on 2008 legislative races, $37 million on the 2010 gubernatorial race, and $44 million on last September’s nine state Senate recall elections. That $44 million more than doubled the previous record of $20.25 million spent in 2008 on 109 separate legislative races.

The money contest was ramping up even before Gov. Scott Walker’s recall battle. But now political spending has exploded in Wisconsin. McCabe predicts as much as $80 million will be spent on next week’s recall. Along with Walker and his opponent, Milwaukee Mayor Tom Barrett, the spending will come from political parties, labor unions, corporations, billionaire business titans, shadowy interest groups, and more. Many Wisconsin citizens have donated to both sides of the recall fight, but contributors from across the country have also invested huge sums in the outcome of the race. And the provenance of millions more in campaign cash entering Wisconsin’s political bloodstream is unknown, funnelled through nonprofit entities that are not required to disclose their contributors.

The deluge is unlike anything in Wisconsin’s 164-year history. It’s also a case study of all the ways deep-pocketed national groups can flood a single state with political money in the post-Citizens United era. McCabe, a critic of Walker’s, says he fears for the recall election’s long-term impact on his state. “Our elections are being poisoned,” he says. “It is increasingly difficult to see who is actually supplying all of this money, who is paying for the poison.”

Money didn’t always rule in Wisconsin politics. Not too long ago, McCabe points out, a candidate light on cash could barnstorm Wisconsin and win a state or congressional election with enough legwork and charisma. The late Bill Proxmire, a Democrat who represented Wisconsin in the US Senate for 31 years, declined campaign contributions and reportedly never spent more than a couple hundred dollars on any of his six campaigns, the first in 1957 and the last in 1982. Proxmire was a prolific campaigner, McCabe says, an ever-present figure at Green Bay Packers games, state fairs, and local gatherings. He’d wait outside auto factories during shift changes to chat with workers. “He used to show off the blisters and the calluses on his hand from all the hand-shaking,” McCabe says.

Proxmire, of course, was an extreme example. Yet Republicans won without relying on tons of campaign cash, either. The late Lee Dreyfus, the state’s governor from 1979 to 1983, won his way in Wisconsinites’ hearts by campaigning in a beat-up red school bus carrying a traveling band and Dreyfus in his iconic red vest.

“What we’ve got is this situation where groups are effectively able to launder money. The public is totally in the dark as to who is really supplying this money,” Mike McCabe says

The point is, McCabe says, that the big money era didn’t come to Wisconsin until the mid-1990s and 2000s, with the elections of governors Tommy Thompson, a Republican, and Jim Doyle, a Democrat. “Republicans and Democrats could run these campaigns remarkably cheaply and get elected statewide,” he says. “Now we see tens of millions of dollars being spent, and most of the campaigning is just 30 seconds at a time on television. Everything has changed.”

When the money started to pour in, Wisconsinites could still count on knowing that money’s source. As late as the 1995 elections, McCabe says, every single penny in spending could be traced to a specific donor—which wasn’t the case in many other states in the union. Then, in the early 2000s, the growing use of so-called “issue” ads—usually thinly-veiled campaign spots hammering or promoting a particular candidate—brought secret political money to Wisconsin. Advocacy groups such as the Greater Wisconsin Committee and Americans for Prosperity pumped millions into the state but didn’t disclose the true identities of their donors. “Not only are we seeing this flood of money that we never saw a generation ago in a place like Wisconsin, but now a lot of that money is dark, you can’t see it’s origins,” McCabe says.

Wisconsin’s reaction to Citizens United was a half-hearted disclosure rule that does little to end dark money. Under the law, groups spending corporate cash in Wisconsin must register with the state and disclose their spending and the source of their income. Yet disclosure documents show how easily outside groups dodge true transparency. The Greater Wisconsin Political Independent Expenditure Fund, for instance, has spent $4.75 million attacking Walker in the recall. But its donors include two similar political groups, the Greater Wisconsin Committee PAC and the We Are Wisconsin Political Fund. The Virginia-based Republican State Leadership Committee has spent $589,000 supporting Republicans and bashing Democrats in the recall elections; the donor for its Wisconsin spending is listed as “Republican State Leadership Committee Inc.” (The federally registered arm of the RSLC gets funding from Walmart, the tobacco giant Altria, and the US Chamber of Commerce, among others.)

If all this sounds like political groups simply shuffling money around so they can avoid disclosing the source of the money, well, that’s what it is, McCabe says. “What we’ve got is this situation where groups are effectively able to launder money.” He adds, “The public is totally in the dark as to who is really supplying this money.”

Then there are the front groups that mask their identity with gauzy names. Right Direction Wisconsin PAC is a creation of the DC-based Republican Governors Association, a corporate-funded organization that spent $132 million to elect GOP governors in 2010. But you wouldn’t know that from Right Direction Wisconsin’s website, HigherTaxesFewerJobs.com, which is devoted to attacking Tom Barrett. The group’s mailers also make no mention of the RGA.

McCabe says the frantic pace of fundraising and spending in the Walker recall will drop off after June 5. The past year of recalls were an aberration, a once-in-a-lifetime series of political battles; the records set in 2011 and 2012 will stand for quite some time, he insists. But the political money wars will rage on in Wisconsin. The dark money will rush in, the candidates will raise ever more money, and the spending will eventually climb even higher. “Elections were getting awfully expensive before we got into this recall mania, and they’re going to remain expensive,” McCabe says. “The genie’s out of the bottle.”