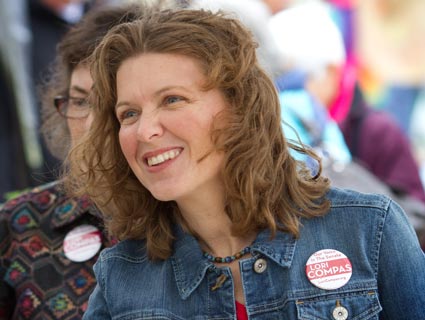 On the evening of November 5, 2011, Lori Compas, a wedding photographer and mother of two, logged into Facebook and wrote something crazy. The kickoff of the statewide campaign to recall Gov. Scott Walker was days away. Wisconsinites were whipped into a frenzy. Discussions about what other Republicans to target for recall grew to Homerian lengths in online forums, comment sections, and Facebook threads. Compas decided to weigh in. “Is anyone planning to file papers to recall scott fitzgerald?” she wrote. “If not i’m gonna do it.”

Later that month, she did. Then a few months after that, Compas launched her own campaign to defeat Fitzgerald in the recall battle she’d started.

Scott Fitzgerald is the majority leader of the state Senate and a key Walker ally. Lori Compas is the grassroots-powered Democratic candidate hoping to defeat him. Perhaps no candidate in Tuesday’s Wisconsin recall elections better captures the populist, anti-establishment spirit of last year’s protests at the Madison capitol, kicked off when Walker “dropped the bomb” on public employees by proposing to strip most of them of their right to collectively bargain.

But before all that, 18 months ago, Compas, 41, admits she was a politically oblivious working mom who didn’t know her own state senator’s name. Today? She’s raised $200,000 for her campaign to oust that same state senator. Her commercials run on local TV. And her red “Lori Compas for Senate” signs freckle the lawns of the 13th Senate District. Compas, her two paid staffers, and her hundreds of fired-up volunteers want to pull off the upset of a generation.

The odds of that upset are slim. The 13th District is one of Wisconsin’s reddest. An April survey by Public Policy Polling showed her trailing “Fitz,” as he’s known, by 14 percentage points. But her recall candidacy has inspired dozens of new progressive candidates around the state to launch their own grassroots-fueled campaigns for the November elections. One political consultant calls it “the Compas effect.”

Compas didn’t tell her husband, Eric, a geography professor at nearby University of Wisconsin-Whitewater, when she filed recall papers against Fitzgerald in November. But he knew plenty well what she was up to by January, when activists led by Compas turned in the 17,000-plus signatures needed to trigger a recall of Fitzgerald. Yet despite her Facebook pledge, Compas says she didn’t leap at the chance to run against Fitzgerald, a 17-year member of the Senate. She called every person she thought had a better chance of beating Fitzgerald, both Democrats and Republicans, pleading with them to run. No one took her up on the offer.

Now that a recall was certain, Compas knew she couldn’t avoid the inevitable any longer, she says. She had to run against Fitzgerald. She filed her candidacy papers on February 28.

A journalism major at the University of Missouri, Compas knew how to listen to people, to ask the right questions. That much was obvious over the two months she spent convincing people to sign petitions to recall Fitzgerald. But after filing her candidacy papers, Compas says, she realized something: “I didn’t know anything at all” about running a campaign—how to fundraise, manage a staff, build a supporters list. So she and some friends drove to Madison and attended a boot camp for first-time candidates and campaign staffers put on by the Wellstone Foundation, named after the late Sen. Paul Wellstone of Minnesota. When Compas returned home to Fort Atkinson a week later, she knew the basics. The rest she’d pick up on the trail. “Lori Compas for Senate” was born.

The state Democratic Party initially dismissed Compas’ do-it-herself campaign. They lent her a pair of offices to use—and nothing else. No money, no manpower. Hers was a truly grassroots effort, staffed by friends and volunteers. The first day of her candidacy, Compas glad-handed some school teachers at a local bowling alley; Fitzgerald, on the other hand, attended a $1,000-a-head fundraiser at a DC lobbying firm.

But Compas has only gained momentum since launching her campaign. She hoped to raise $100,000; state campaign finance reports show she’s raised nearly twice that amount and spent $111,000. The average donation to her campaign is $30. Fitzgerald, meanwhile, has raised $794,0000 and spent $545,000 of that money.

Fitzgerald ruffled feathers in progressive circles when he said that Compas’ husband was the driving force behind her campaign. “I don’t for one minute believe she is the organizing force behind this whole thing,” he said. Compas called the remark “pretty insulting” but used to it reissue her demand that Fitzgerald agree to debate her. “If he thinks I can’t handle myself, he should come out and face me,” she said at the time.

Last Friday, Compas guided her Pontiac Vibe with a “We Are The 99%” sticker through the quiet town of Juneau, Wisconsin. She wanted to knock on a few final doors. The voters on her list had all voted Republican at some point but had also signed recall petitions. At the houses she visited each person said they’d vote for her on Tuesday. “I expect Fitzgerald’s gonna be on the unemployment line next week,” an older, stubbled man told her.

A half-dozen stops later, Compas dropped me off at my car. She looked comfortable as the insurgent candidate, eager to chat up a few more Juneau residents before the sun set behind the Wisconsin farmland. What if you don’t win Tuesday? I asked. Will you stick with politics if you don’t defeat Fitzgerald?

“I’m not thinking about losing on Tuesday,” she said with a smile. A classic politician’s answer.