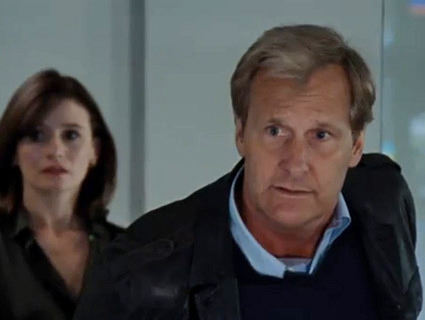 The Newsroom (premiering Sunday, June 24 at 10 p.m. EST on HBO) is a regrettable homecoming to television for writer Aaron Sorkin, the noted wit-and-quotable-monologue maestro behind Sports Night, The West Wing, Charlie Wilson’s War, A Few Good Men, and a whole bunch of other plays and movies. After tanking so severely with NBC’s one-season Studio 60 on the Sunset Strip, you’d think that taking five years off from TV—and winning an Oscar in that interim—would have heralded a rebirth of Sorkin’s small-screen touch; the kind of flair and insight that gave us the triumphant second and third seasons of the Bartlet administration.

Verdict: It is now clearer than ever that Aaron Sorkin should stick to churning out scripts for profitable and critically hailed Oscar bait, and stop trying to revisit the brief era when he was considered by many to be the best thing to happen to television since RCA color.

The deeply flawed if well-intentioned series does not waver one bit from the Sorkin plot formula. It’s a behind-the-scenes look at News Night, an hour-long cable news program anchored by Will McAvoy (played by a magnetic Jeff Daniels), an addled, middle-aged sex symbol of primetime. His staff is dysfunctional, immature, and clumsy, but also allegedly the best in the business. His executive producer Mackenzie MacHale (an irritating and miscast Emily Mortimer) is his former lover. The crew try to produce a news show with as much guts, integrity, and smarts as possible, all the while hampered by the constraints of corporate ownership. The first season of The Newsroom takes place in the Obama era and incorporates real-life breaking news, so if you had forgotten that Deepwater Horizon happened, this show will remind you.

For the first four episodes, Sorkin and co. spend their time preaching loyalty over career moves, virtue over success, informed debate over hoopla, camaraderie over cheap individuality, and art over commerce. It’s essentially the exact opposite of HBO’s Veep. But really what it boils down to is Sorkin shouting at the audience, “GUYS! JOURNALISTS CAN BE GOOD HUMAN BEINGS, TOO! GUYS!” His approach to tackling the shortcomings and the folly of American society and corporate media borders on being too sophomoric to entertain. For instance:

Such lines set the tone for an overabundance of stodgy dialogue—exchanges and rants that are packed so full with naivety and bromides that they fail to provoke thought. The gravitas is hollowed out, the heavy-handedness doesn’t sell, the attempts at wry humor stall, and Sorkin’s rapid-fire sarcasm doesn’t flutter the heart the way it used to.

There is, however, precisely one good scene during The Newsroom‘s inaugural four episodes: The fourth episode concludes as the crew scrambles to report on an assassination attempt on a public figure. The scene is perfectly paced, smoothly directed, and invigorating. “You’re a fucking newsman, Don, and if I ever tell you otherwise, you punch me in the face!” Will proudly yells at a producer.

It’s a sublimely executed and genuinely moving few minutes, whatever that’s worth. Here’s to hoping that the rest of the season adapts accordingly, and jettisons the holier-than-thou, smart-alecky insufferability.