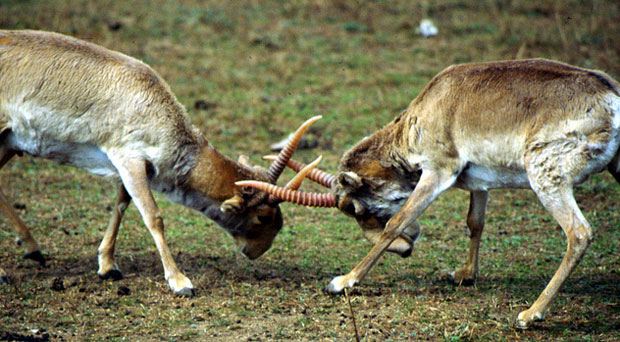 This is getting a bit weird. In May 2010 at least 12,000 critically endangered saiga antelopes (Saiga tatarica) were found dead in Kazakhstan. Exactly one year later a second mass die-off occurred, killing 450 of the rare animals. Now, once again almost exactly a year later, yet another round of deaths has struck Kazakhstan’s saiga population. Nearly 1,000 dead antelopes have been found over the past two weeks.

The previous deaths were blamed on pasteurellosis, an infection that afflicts the lungs. Healthy animals aren’t usually affected by the bacterium that causes this disease but it can prove fatal in creatures whose immune systems have been compromised. This week Kazakhstan’s Ministry of Agriculture blamed the most recent spate of deaths on pasteurellosis, although they provided no details.

But some ecologists in Kazakhstan and Russia are instead blaming the fatalities on the April landing of a Soyuz capsule from the International Space Station. At least 120 dead saigas were found near the village of Sorsha, where the Soyuz landed last month. Others see a possible link to the Baikonur Cosmodrome launch site in central Kazakhstan. “It could be from chemical elements left from space rockets that fly over this place,” ecologist Musagali Duambekov, leader of the For a Green Planet political movement, told Radio Free Europe/Radio Liberty (RFE/RL). He also suggested the “extensive use of fertilizers” in the region could be harming the antelopes’ immune systems.

Others suggest a more natural cause. Eleanor Milner-Gulland, chair of the Saiga Conservation Alliance, told RFE/RL the animals may have consumed too much wet or “rich” vegetation tainted by bacteria during the breeding season. Most of the dead saigas were females who had just given birth, which may have left them in a weakened state and unable to feed their young, which also died.

Once numbering in the millions, saigas were extensively poached after the fall of the Soviet Union. Today just 85,000 or so animals remain in five isolated populations in Russia, Kazakhstan, Uzbekistan and Mongolia. Other than these mysterious die-offs, the main threats to saigas remain poaching for their meat and traditional Asian medicine, in which the animals’ translucent horns are used to “cure” headaches, fevers, sore throats and other ailments.