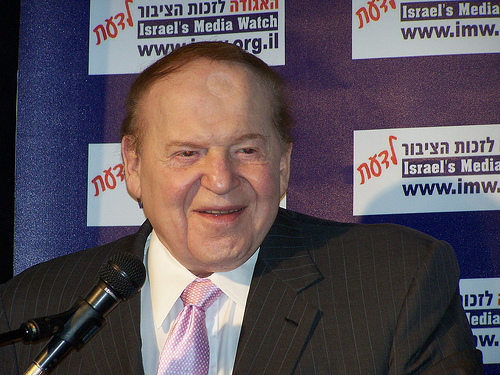 Sheldon Adelson, the conservative billionaire casino mogul, has reportedly given $10 million to the pro-Romney super-PAC Restore Our Future. All told, Adelson and his wife, Miriam, have pumped at least $25 million into outside political groups so far this election cycle. Most of that money went to Winning Our Future, the now-dormant super-PAC that backed Newt Gingrich’s presidential bid.

But is Adelson’s latest eight-figure donation as sign of more to come?

The Wall Street Journal, which reported Adelson’s $10 million gift on Wednesday, says Adelson’s 2012 spending could eventually total as much as $100 million. Earlier this spring, Adelson said he’d be making one more “small donation”—presumably, this most recent $10 million—to a super-PAC and then would consider future giving to 501(c)(4) nonprofits that don’t disclose the names of their donors. Adelson is already the largest donor to candidate-specific super-PACs in this election cycle. He’s also now the biggest donor to outside spending groups in American history.

Adelson met with Romney in late May in Las Vegas, and had previously said he’d spoken with Romney “many, many times.” That said, Adelson has criticized Romney in the past, claiming “he’s not the bold decision maker like Newt Gingrich is.” Adelson has direct ties to the Romney super-PAC Restore Our Future in the form of Carl Forti, the political guru who runs the group. In 2008, Forti helped run the 501(c)(4) nonprofit Freedom’s Watch, which was bankrolled by Adelson’s money. Created to counter progressive outside groups including MoveOn.org, Freedom’s Watch was largely considered a bust after internal problems and a bloated infrastructure led to it shutting down in December 2008.

Here’s more from the Journal on Adelson’s $10 million donation:

People close to Mr. Adelson said that he wants to be certain about Mr. Romney’s positions on key issues, including support for Israel against aggressors in the Middle East. Mr. Adelson has publicly criticized President Barack Obama’s support of Israel as too weak.

Mr. Adelson has told friends that he intends to give at least $100 million to conservative causes and candidates this election cycle. He contributed some $250,000 to Republican Gov. Scott Walker of Wisconsin, who just won against a labor union-forced recall election there.

But he has also told his friends and colleagues that he would prefer to keep his contributions under wraps in order to avoid controversy, and will likely focus donations mostly on non-profits affiliated with political PACs, which don’t have to disclose the names of donors. He is expected to donate to the conservative non-profit Crossroads GPS, which was founded by Republican strategist Karl Rove, a longtime friend of Mr. Adelson, according to Republican fundraisers.

Adelson’s politics are vehemently pro-Israel and anti-union. He once called radical Islam and so-called “card check” legislation to make it easier for workers to unionize the two most “fundamental threats to society.”