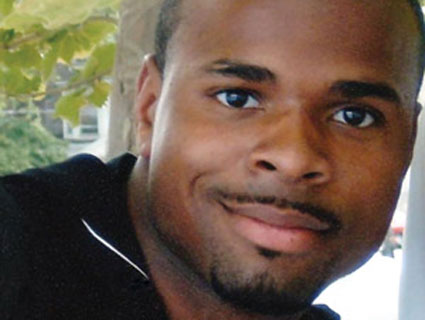 Sharif MobleyCourtesy of the Mobley Family

Sharif Mobley, an American who alleges he was arrested and interrogated by a foreign security service at the behest of the US government, has long claimed that the Federal Bureau of Investigation visited and questioned him when he was first imprisoned in Yemen in early 2010. US government officials have long refused to comment about Mobley’s case on the record. Now, an extensively redacted FBI document obtained by Mother Jones confirms US agents did indeed visit Mobley in prison. It also shows that the government was aware of Mobley’s detention while US officials were telling his wife that they did not know his whereabouts.

Mobley, whom US officials have said was in Yemen to pursue terrorism, has admitted to contacting Anwar al-Awlaki, the American-born Al Qaeda propagandist who was killed in a US drone strike in September. But Mobley and his lawyer, Cori Crider of the London-based human rights organization Reprieve, say that the two men spoke about religious and personal matters, not terrorism, and that Mobley was in Yemen to learn Arabic at the country’s cheap language schools. Crider claims Awlaki and Mobley met in person once in 2008, more than a year before Mobley was picked up by Yemeni security forces on January 26, 2010. (Security forces in American-allied countries including Yemen are often trained and funded by the US government.)

Mobley and the government’s competing claims about his conduct are next to impossible to adjudicate outside of a court of law. But his theory about his detention is not without precedent. As Mother Jones reported in September, the FBI has a long-standing practice of facilitating the imprisonment of American terror suspects by foreign governments. Critics refer to the practice as proxy detention. Elite FBI agents known as legal attaches, or legats, inform foreign governments and security forces about Americans traveling abroad whom the FBI suspects are involved or interested in terrorism. Sometimes, these suspects are simply monitored; occasionally, Americans are arrested based on tips from the FBI and then detained and questioned with the FBI’s knowledge. The program enables the interrogation of American terror suspects beyond the reach of US courts.

The new FBI document, which you can read below, describes a visit to Mobley while he was being held in a police hospital in Sanaa, the Yemeni capital. Mobley claims he was held in that hospital and in a series of other facilities until March 7, 2010. That’s when, according to Yemeni officials, he tried to escape, killing a guard in the process. (Mobley remains imprisoned in Yemen to this day.) Although the Yemeni government has claimed that Mobley was first picked up in an anti-terrorism sweep in early March, a document previously obtained by Mother Jones indicates he was arrested and held by Yemeni authorities in January and February as well.

While Mobley was detained, Crider says, he became increasingly worried about his wife, Islam; he claims his captors and the FBI agents who visited him had threatened to arrest her.

Mobley’s wife was worried about him, too. Islam visited the embassy in Sanaa asking after Sharif, but US officials told her they did not know where her husband was and encouraged her to report him missing, she told the Washington Post‘s Peter Finn in 2010. Three days before Sharif Mobley’s escape attempt, Islam Mobley returned to the US without finding out what had happened to her husband, who had been missing for well over a month.

The anonymous US officials quoted in Finn’s 2010 Post story did not dispute Islam Mobley’s claim that she was never told what had happened to her husband. But the very existence of the FBI document obtained by Mother Jones makes clear that the FBI knew exactly where Mobley was, and the text of the document indicates that the US government officials who interrogated Mobley in Yemeni custody knew that his wife was looking for him. Here’s the relevant section:

During the course of the interview, Mobley repeatedly expressed concern for his wife and revealed that they had a pre-established plan she was to execute in the event of his arrest or disappearance. One aspect of this plan was his wife was to go to the Embassy immediately. Mobley did not indicate why he thought such precautions were necessary. Mobley was not surprised when notified his wife had come to the embassy after his arrest. Mobley repeatedly instructed [REDACTED] to tell his wife that he ordered her to leave the country with the children and return to the US. When asked to provide a phone number for his wife, Mobley claimed he could not remember.

The document also describes Mobley’s claims about his action-movie-style arrest, which I detailed in the September/October 2011 issue of Mother Jones.

A second document obtained by Mother Jones, which you can also read below, is a US government email exchange that confirms Mobley’s claims that he visited the US embassy in advance of his arrest and was interviewed by law enforcement at the embassy. Both of the new documents were provided to Crider in response to a Freedom of Information Act request; she provided them to Mother Jones. The embassy’s visitor logs, which were obtained by Mother Jones in a separate FOIA request, are partially redacted but appear to make no mention of Mobley’s visits.

The FBI and the Justice Department did not respond to a request for comment by publication time. (If either responds we’ll update the story.)