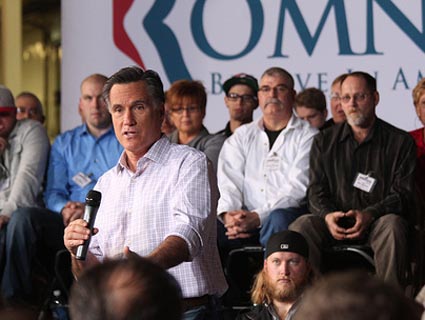 Mitt Romney really doesn’t want to answer questions on immigration. Last week, he gave an entire speech on the subject without explaining how he would deal with the DREAM Act-eligible unauthorized immigrants who would be spared deportation by a recently announced Obama administration policy. When most of Arizona’s harsh anti-illegal immigration law was blocked by the Supreme Court on Monday, a Romney surrogate refused to say what Romney thought of the ruling. Later, Romney himself said he wished the Supreme Court had given “more latitude to the states,” which is to say he offered a bland, conservative-sounding phrase that isn’t anything resembling a direct answer.

Romney’s evasiveness is getting absurd enough that the political press is moving from its practice of describing the GOP challenger as “cautious” to simply writing that he won’t give a straight answer. Unfortunately, Romney seems to have hoodwinked some reporters into thinking he’s been relatively consistent on the subject. Here’s Dan Balz of the Washington Post:

Romney long has opposed a comprehensive immigration reform policy that would include a path to citizenship for the roughly 12 million undocumented immigrants living in the United States other than making them return to their native countries and get in line. During one debate, Romney famously described this policy as “self-deportation.” He has been consistent on this through both of his campaigns for the White House.

That brings us to the past two weeks, when the former governor went fuzzy in public about immigration. It began when President Obama, in a move that was as political as it was substantive, issued an order that halted the deportation of illegal immigrants who came to this country as children if they met specific criteria.

Romney hasn’t just been fuzzy for the past two weeks, nor has he been “consistent on this through both of his campaigns for the White House.” While he was laying the groundwork for a presidential run in 2005, Romney critized Republicans for not supporting George W. Bush’s immigration reform proposal, which would have included a path to citizenship. In February, the National Review highlighted this excerpt from an interview Romney did with the Boston Globe in 2005:

I think an amnesty program is what — which is all the illegal immigrants who are here are now citizens, and walk up and get your citizenship. What the president has proposed, and what Senator McCain and Cornyn have proposed, are quite different than that. They require people signing up for a, well, registering and receiving a registration number. Then working here for six years and paying taxes — not taking benefits. . . . And then at the end of that period, registering to become a citizen. . . . And I think that those are reasonable proposals.

That sounds a lot like President Barack Obama’s “Blueprint for Immigration Reform.”

This is what Romney told a local paper, the Lowell Sun, in 2006:

I don’t believe in rounding up 11 million people and forcing them at gunpoint from our country. With these 11 million people, let’s have them registered, know who they are. Those who’ve been arrested or convicted of crimes shouldn’t be here; those that are here paying taxes and not taking government benefits should begin a process towards application for citizenship, as they would from their home country.

My own view is consistent with what you saw in the Lowell Sun, that those people who had come here illegally and are in this country–the 12 million or so that are here illegally—should be able to stay sign up for permanent residency or citizenship, but they should not be given a special pathway, a special guarantee that all of them get to say here for the rest of their lives merely by virtue of having come here illegally.

Romney is trying to have it both ways here, and later he does it again, taking the position that unauthorized immigrants should “go home” before getting on the path to citizenship. Romney’s relative consistency this time around—at least until Marco Rubio (R-Fla.) started floating the idea of temporary legal status for potential DREAM Act beneficiaries—is an artifact of the near-extinction of the wing of the GOP that was moderate on immigration. The Republican Party of 2012 is dominated by immigration hardliners; in 2008, the moderates still held sway. Because Romney’s main rival in the 2008 Republican Primary was Senator John McCain (R-Ariz.), who was a relative moderate at the time, Romney moved to the right—even though he had previously supported both Bush and McCain’s comprehensive immigration reform proposals. He did this again with Rick Perry and Newt Gingrich in the 2012 primary.

But has Romney been “consistent” on opposing a path to legalization or citizenship “through both of his campaigns for the White House?”

No. Not even close.