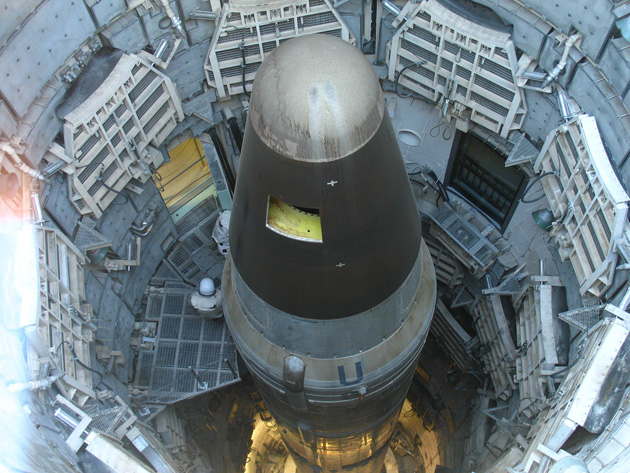 Employees of private companies that produce the main pieces of the US nuclear arsenal have invested more than $18 million in the election campaigns of lawmakers that oversee related federal spending, and the companies also employ more than 95 former members of Congress or Capitol Hill staff to lobby for government funding, according to a new report.

The Center for International Policy, a nonprofit group that supports the “demilitarization” of US foreign policy, released the report on Wednesday to highlight what it described as the heavy influence of campaign donations and pork-barrel politics on a part of the defense budget not usually associated with large profits or contractor power: nuclear arms.

As Congress deliberated this spring on nuclear weapons-related projects, including funding for the development of more modern submarines and bombers, the top 14 contractors gave nearly $3 million to the 2012 reelection campaigns of lawmakers whose support they needed for these and other projects, the report disclosed.

Half of that sum went to members of the four key committees or subcommittees that must approve all spending for nuclear arms—the House and Senate Armed Services Committees and the Energy and Water or Defense appropriations subcommittees, according to data the Center compiled from the nonprofit Center for Responsive Politics. The rest went to lawmakers who are active on nuclear weapons issues because they have related factories or laboratories in their states or districts.

Members of the House Armed Services Committee this year have sought to erect legislative roadblocks to further reductions in nuclear arms, and also demanded more spending for related facilities than the Obama administration sought, including $100 million in unrequested funds for a new plant that will make plutonium cores for nuclear warheads, and $374 million for a new ballistic missile-firing submarine. The House has approved those requests, but the Senate has not held a similar vote on the 2013 defense bill.

Although lawmakers say their votes are not influenced by the campaign donations they receive, and donors routinely say their contributions are meant to ensure access—not buy votes, the Center’s report said that the $18 million given by the contractors to key lawmakers over the course of their political careers makes it hard for the recipients to ignore what the companies want.

“Any effort to downsize the nation’s nuclear force is likely to be met with fierce opposition from the individuals and institutions that benefit from the nuclear status quo, including corporations involved in designing and building nuclear delivery vehicles; companies that operate nuclear warhead-related facilities; and members of Congress with nuclear weapons-related facilities or deployments,” said the report by William Hartung, who directs the Center for International Policy’s Arms and Security Project.

Members of the House Armed Services Committee have demanded more spending on nuclear facilities, including $100 million in unrequested funds for a new plant that will make plutonium cores for nuclear warheads.

Other groups have documented that there is a substantial financial stake in nuclear weapons policymaking: At present, the US government spends roughly $31 billion a year on its arsenal, according to a tally released on Tuesday by the Stimson Center, a nonprofit group in Washington. It has also proposed to spend at least $120 billion on new warhead-carrying submarines, bombers, and missiles over the next several decades.

Ensuring steady access to such funding is vital for some of the companies whose employees made large campaign donations cited in the study—such as Lockheed or Northrup Grumman—because they draw at least 80 percent of their revenue from federal contracts. Of the 137 lobbyists hired by the top contractors, 57 are former members of Congress, 39 are former congressional staff, 16 are former defense officials and 8 are former Energy Department officials, the study said.

Although many firms work on multiple weapons and so have various reasons to curry congressional favor, some of the best-financed lawmakers are prominent advocates of sustaining and modernizing the nuclear arsenal, according to the study. They have promoted that cause through formal legislative caucuses that promote shipbuilding, submarines, and long-range strategic bombers, as well as through an informal alliance of members from states where nuclear-tipped ballistic missiles are based, the report states.

These include the Shipbuilding Caucus, the Submarine Caucus, and the Long-Range Strike Caucus. The contractor-supported counterparts of these groups include the Submarine Industrial Base Council, which claims a membership of 5,000 companies; the 60,000-member Navy League; and the 100,000-member Air Force Association.

Of the top 20 Senate recipients of nuclear weapons contractor donations, 7 are presently members of the members of the Armed Services subcommittee on strategic forces. They have collected a total of $272,816 for their 2012 campaigns, and a total of $2.4 million since their first election. On the House side, 6 of the top 20 recipients are members of the Armed Services strategic forces subcommittee. They have collected $558,532 for their 2012 campaigns, and $2.2 million overall.

The top single Senate recipient is Diane Feinstein (D-Calif.), who chairs the Intelligence Committee and the appropriations subcommittee that handles the Energy Department’s nuclear weapons budget; she has collected $74,500 in this election cycle and $421,747 over her 20-year career, according to the report. Those figures represent only one percent of her total campaign receipts, for the current cycle and over her career.

Feinstein’s spokesman Brian Weiss did not respond to a request for comment. The report noted that she has questioned the high cost of several new facilities that the Energy Department sought to build for warhead production or processing.

The government spends around $31 billion a year on its nuclear arsenal, and has proposed spending at least $120 billion on new submarines, bombers, and missiles.

The funds represent nearly a fifth of all the campaign donations he has collected in this cycle, and the lifetime tally is nine percent of his lifetime campaign funding, according to data on the Center for Responsive Politics website.

McKeon’s spokesman Alissa McCurley told the Center for Public Integrity in April that “funding from special interests does not always mean something unethical is afoot. Chairman McKeon receives input from senior military leaders as part of routine Congressional oversight. Those views, along with those of Committee professional staff members, are what sets his annual priorities” on arms control and nuclear arms.

Capitol Hill records make clear that McKeon’s support for industry positions nonetheless increased as he became a more senior committee member and its donations to him spiked. Defense firms of various categories donated between 7 and 32 times more to McKeon after he became chairman than they did beforehand, according to a November 2011 study of key House committee chairman by Citizens for Responsibility and Ethics in Washington (CREW), a Washington nonprofit group.

The CREW study further found that from 2007-2008, McKeon’s votes were aligned with defense firms about a quarter of the time, but “since January 2011, Rep. McKeon has voted on average 100 percent in agreement with the industries regulated by the Armed Services Committee.” That alignment was higher than the average for House Republicans. McCurley did not respond to an email and phone call requesting comment.

Defense industry funding of the committee’s senior Democrat, Rep. Adam Smith (Wash.) similarly rose substantially when he moved to that position in 2010. But Smith’s voting support for industry-backed policies has fluctuated, going from 75 percent in 2007-2008 to 33 percent from 2009-2010 and then returning to 75 percent since Jan. 2011, according to the CREW study.

Some of the top campaign recipients have parochial reasons for supporting nuclear weapons contractors: Smith’s district includes a substantial Boeing presence while McKeon’s district includes Northrop Grumman, Boeing, and Lockheed factories, as well as a major Air Force base. Feinstein has a substantial portion of the aerospace industry in her state as well as one of the three laboratories where nuclear weapons are designed.

But CREW said the sudden influx of contributions given to key members once they became chairman or second-in-rank raised overall questions “about how beholden [they] are to the industries they oversee, and whether they are independent enough to put public interest ahead of special interest.”