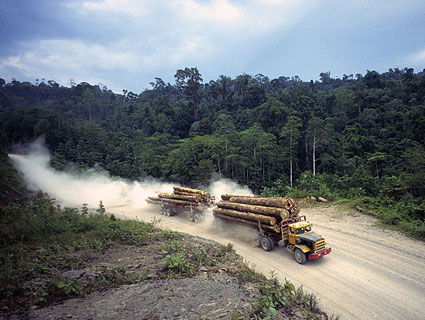 A little more than a year ago, Indonesia enacted a moratorium on deforestation, and got major finanial backing from the US and Norway to make it happen. But now halfway into its two-year moratorium, it is still a long way from meeting its goal of cutting carbon emissions by saving the rainforest, according to a recent article from the journal Nature.

The Norway-US partnership provided $1 billion to Indonesia to protect its forested lands, with the goal of cutting greenhouse-gas emissions 26 percent by 2020. The moratorium was meant to be a temporary time-out on chopping down the rainforest, and during the two years, the Indonesian government was supposed to develop a sustainable forestry plan that it would implement when the moratorium lifted. Indonesia’s goal is more ambitous than what we’ve seen from other major emerging economies. However, improved forest maps and data gathering have found that, so far, the moratorium is not having the effect many had hoped for:

Progress is slow in part because the clearance-permit ban is not as radical as it at first seemed. An analysis from CIFOR [the Center for International Forestry Research], published last October, found that 42.5 million hectares of forest covered by the moratorium are already protected under Indonesian law, with only 22.5 million hectares receiving extra protection.

An updated version of Indonesia’s forest map, published last week, shows that the government has included a further 862,000 hectares of forest under the ban, but it has also excluded another 482,000 hectares, so the net additional protected forest is 380,000 hectares. It is not yet clear what kinds of forest are covered by the changes.

The combination of strong corporate interests and rampant political corruption in Indonesia made observers more than a bit nervous when the $1 billion partnership was announced back in 2010. But this type of partnership is a major component of plans to cut emissions worldwide, and the world is watching the success or failure of Indonesia’s effort.

Indonesia’s ability to actually enact this ban is extremely important for protecting rainforests. The nearly 18,000 islands that make up the country are home to the largest expanse of rainforest in Asia and the third-largest tropical rainforest in the world. The Rainforest Action Network reports that 80 percent of Indonesia was foreststed as recently as the 1960s. However, demand for commodities like pulp, paper and palm oil has caused an infiltration into the rainforests of Southeat Asia. Indonesia now has one of the highest deforestation rates in the world, according to RAN, with more than 2.4 million acres lost each year.

With one year left on the ban, stronger enforcement and better analysis of forested areas for conservation-value and carbon storage potential are necessary for Indonesia to continue progress towards emissions reduction.