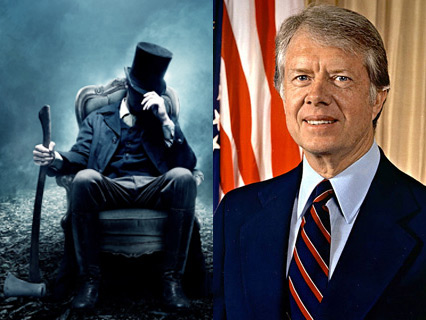 It’s exuberant and obscenely fun, plugging away at one big, fat, giddy premise. The vamp-loaded 3D action sequences (orchestrated with a honed shamelessness by director Timur Bekmambetov) are sublime, mainly due to the fact that you get to see the Great Emancipator balletically wreck legions of blood-suckers through the art of ax-twirling and kung fu. The movie also has the greatest stampede scene since Simba got his life ruined in The Gorge; one that involves the vampire who murdered Lincoln’s mom throwing full-grown horses at a young and vengeful Abe.

But aside from being a wild kick of escapist, blood-mottled fun (tepid critical reception be damned), the film opens up a world of possibilities: A movie franchise in which Hollywood would honor every single American president with a gore-soaked retelling:

1. George Washington: Acid-Pterosaur Poacher. He resigns his commission in 1783…while fighting off flying reptiles that spew acid at the behest of a bitter British elite.

3. Thomas Jefferson: Big-Pimpin’ Zombie Drop-Kicker. Completely dominates Islamist bandits centuries before it was cool. (Spoiler: The bandits all turn out to be zombies.)

4. James Madison: Nunchuck Crusader. Successfully beats back British advances during the War of 1812 with political savvy. And barbwire-covered nunchucks.

5. James Monroe: Cthulhu Pile-Driver. Shepherds the country through the Panic of 1819, which, as it turns out, was actually started by Cthulhu (a Federalist supporter).

28. Woodrow Wilson: Werecat Quasher. Pushes through the Sedition Act of 1918 as a means to crack down on the werecat insurgency. (The move is however widely misinterpreted as an effort to crush anti-war dissent.)

29. Warren G. Harding: The Man Who Tamed The Hulk. Goes down in history as America’s first black president. Also, Warren challenges The Hulk to a cage match. Just cuz.

30. Calvin Coolidge: Ghost Killah. Neutralizes brutish ghouls while not talking to anybody, ever.

32. Franklin Roosevelt: Chupacabra Dominator. Teams up with Churchill and Stalin in order to trounce chupacabra incursions into Western Europe and the Far East.

37. Richard Nixon: Ogre Blaster. Violates the Logan Act, betrays America, and prolongs the Vietnam War, all in a desperate attemp to vanquish ogres.

42. Bill Clinton: Medusa Punisher. You know what this is.

But for now, I guess we’ll all just have to make due with just this one:

Abraham Lincoln: Vampire Hunter gets a wide release on Friday, June 22. The film is rated R for violence throughout and brief sexuality. Click here to get local showtimes and tickets.