Now that the zombie apocalypse appears to have calmed down, we have a different end-of-the-world situation to deal with. A study published in the science journal Nature this week finds that human activity is pushing Earth toward a planetary shift wherein “widespread social unrest, economic instability and loss of human life could result.”

According to paleoecologist Anthony Barnosky and his 21 co-authors, the human population is ecologically influencial enough to transform the planet into a state heretofore unknown in human experience. The study draws from more than 100 scientific papers looking at environmental tipping points and biological forecasting. The paper concludes that the global ecosystem:

… is approaching a planetary-scale critical transition as a result of human influence. The plausibility of a planetary-scale ‘tipping point’ highlights the need to improve biological forecasting by detecting early warning signs of critical transitions on global as well as local scales, and by detecting feedbacks that promote such transitions. It is also necessary to address root causes of how humans are forcing biological changes.

This study adds to the ever-growing pile of scientific evidence that humans are on path to destroy life on Earth as we know it unless we change our ways. A Wired article on the study noted that human activity currently covers 43 percent of land around the world, and affects double that amount. Humans use one-third of all available fresh water and harvest 20 percent of the planet’s net terrestrial production. As Wired points out, current extinction rates compare to that which occured during the demise of dinosaurs. The paper finds that we’re about 15 years away from reaching “critical threshold” if we continue our current rate of land use: 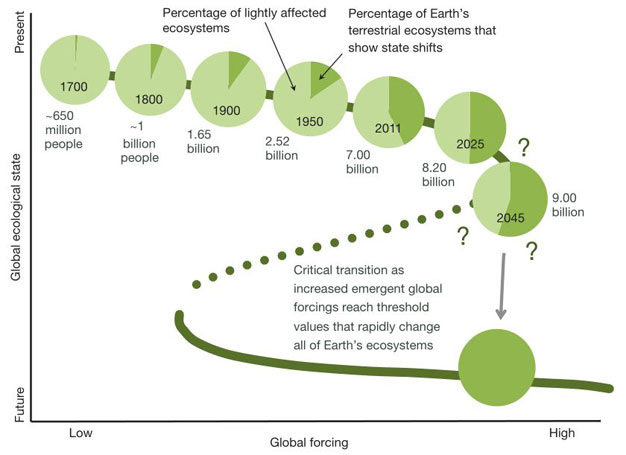 Graph of land use as a quantification of a potential planetary state shift Anthony Barnosky, et al./Nature

The study isn’t all gloom and doom; the researchers offer these solutions in the study’s conclusion:

Diminishing the range of biological surprises resulting from bottom-up (local-to-global) and top-down (global-to-local) forcings, postponing their effects and, in the optimal case, averting a planetary-scale critical transition demands global cooperation to stem current global-scale anthropogenic forcings. This will require reducing world population growth and per-capita resource use; rapidly increasing the proportion of the world’s energy budget that is supplied by sources other than fossil fuels while also becoming more efficient in using fossil fuels when they provide the only option; increasing the efficiency of existing means of food production and distribution instead of converting new areas or relying on wild species to feed people; and enhancing efforts to manage as reservoirs of biodiversity and ecosystem services, both in the terrestrial and marine realms, the parts of Earth’s surface that are not already dominated by humans.