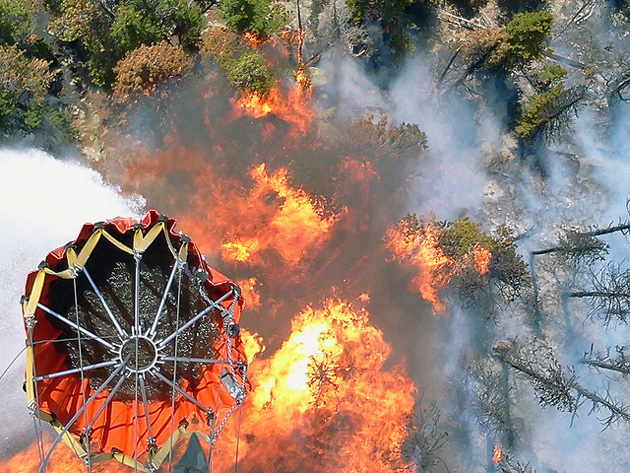 This explainer is being continuously updated; click on a question below to read the answer.

Update: Monday, July 2:  Firefighters continue to make progress on the Waldo Canyon fire, which is now 55 percent contained. The Denver Post has an interactive Google map that allows you to navigate the neighborhoods damaged by the fire. Here’s a video shot by a resident returning to his scorched neighborhood:

Update: Sunday, July 1, 2:39 PM: Firefighters have contained 45 percent of the Waldo Canyon fire, and evacuations continue to be lifted. Officials slightly increased the count of houses destroyed to 350, and the death toll was raised from one to two. The Denver Post reports on residents confronting the damage here; the Boulder Daily Camera‘s take is here. The High Park fire is now 100 percent contained.

Here’s a Colorado Springs resident describing the moment when she found out the moment her house was destroyed in the Waldo Canyon fire:

Udpate: Saturday, June 30, 10:30 AM: The High Park Fire is almost completely contained, an most evacuees are returning to their homes. Meanwhile, the Waldo Canyon fire is now 30 percent contained, but since the weather has become hotter and drier, firefighters expect a challenging weekend. The Denver Post reports that burglaries occurred at several of the homes that were evacuated.

Here’s a time-lapse video of the Waldo Canyon fire, taken from June 23-June 28. (I recommend muting the terrible soundtrack.)

The second most destructive wildfire in Colorado history, the High Park Fire started near Ft. Collins on June 9 and has burned more than 140 square miles and destroyed 257 homes, to the tune of $36.4 million in firefighting costs. It is now about 85 percent contained, and nearly 2,000 evacuees are just returning home. It’s expected to be completely contained by July 1.

The other high-profile blaze is the Waldo Canyon Fire, which started on June 23 just outside Colorado Springs, the state’s second-largest city. At about 26 square miles, the Waldo Canyon Fire is smaller than the High Park Fire, but because of the population density in its path, it’s already the most destructive in Colorado history. So far, it’s only 15 percent contained and has killed one person and burned 346 homes on 35 streets, according to the Denver Post. Tens of thousands around Colorado Springs have been evacuated, and Army troops are working to protect the Air Force Academy there. So far, the Waldo Canyon Fire has cost $3.2 million. “Huge, ugly, black clouds of smoke,” is how one evacuee described the fire to the Post. “When you step out of your front door and there’s smoke, it’s absolutely terrifying.”

Here’s a video of President Obama’s visit to Colorado Springs:

You can see before and after aerial views of the landscape around both the High Park Fire and the Waldo Canyon fires with this cool USGS tool.

This is a video taken from a home near the Waldo Canyon (Colorado Springs) fire:

Here’s one view of the High Park fire near Ft. Collins: 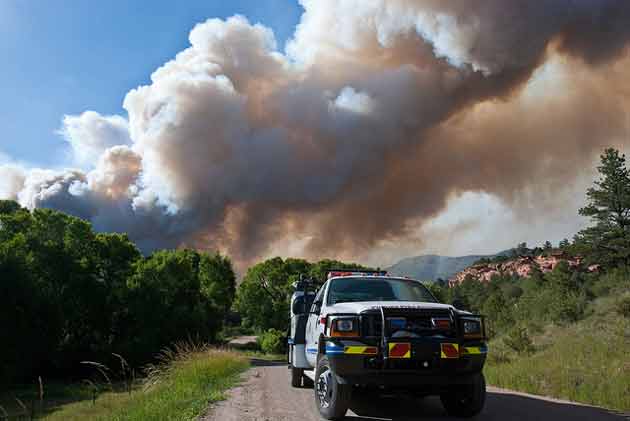 And here’s smoke from the Flagstaff Fire as captured from a parking lot at the nearby University of Colorado-Boulder:* 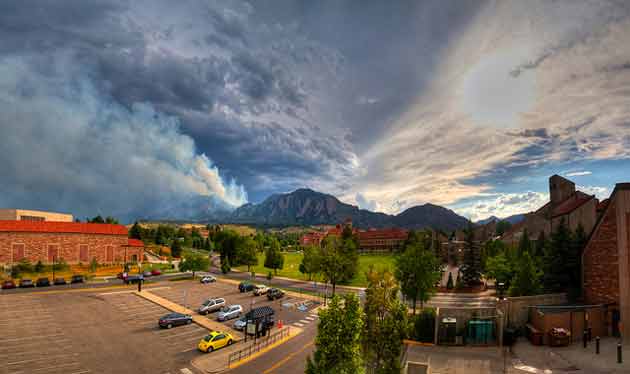 How do these fires compare to others in history?

In late May, the Gila National Forest Fire became the biggest in New Mexico history, eating up more than 265 square miles. While neither of the big Colorado fires has yet to claim such a title for itself, the governor is already calling it the worst fire season in state history, with four dead statewide,  hundreds of structures destoyed, and nearly $40 million spent.

Are these fires caused by climate change?

In a conference call with reporters this morning, leading climate scientists Dr. Steven Running of University of Montana and Dr. Michael Oppenheimer of Princeton explained how more frequent and severe wildfires are a predictable by-product of global warming, as higher temperatures leave dried-out forests just a lightning-strike away from uncontrollable blazes.

Scientists are reluctant to attribute these or any fires directly to man-made greenhouse gas emissions. Still, the fires fit squarely into a pattern predicted by climate models that show emissions driving warmer winters that lead to longer, drier summers. 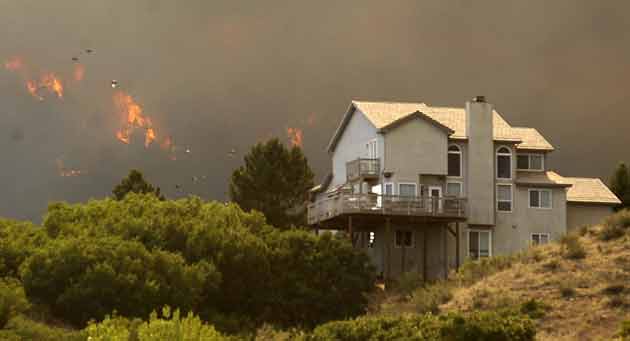 Is this the new normal?

If local temperature averages continue to rise, then yes. This March through May was the second warmest such period on record for Colorado, and as the chart below shows, it’s been exceptionally dry: 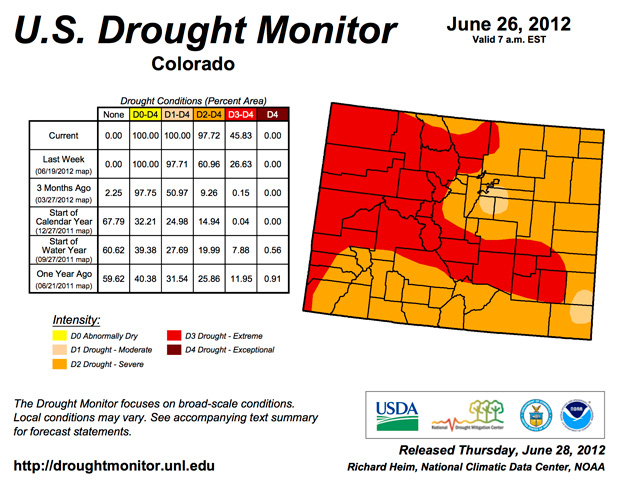 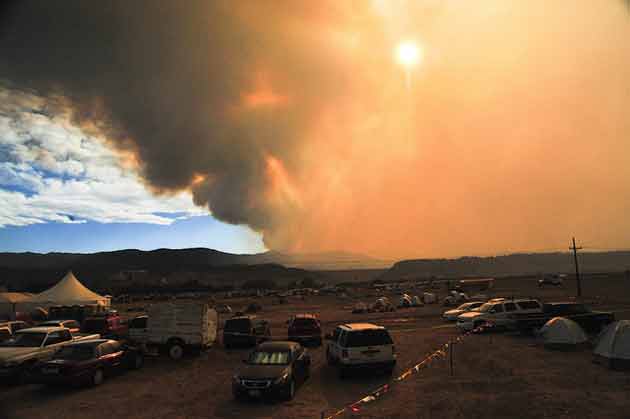 So if this is the new normal, what’s the best way to fight fires?

The important thing, Running said, is to keep brush buildup low by using carefully controlled burns and collecting and reusing dead wood from the forest floor. Firefighters should also focus their efforts on areas near human development, and let fires out in the wildnerness burn more freely. This week, at least one Washington lawmaker railed on the Forest Service for not doing more to aggressively battle the flames. But Running cautioned that with high winds, the fires “are like a nuclear bomb going off,” and that telling anyone to simply stop them is like telling NOAA to simply stop hurricanes before they reach land.

Both scientists agreed that if, as predicted, wildfires continue to become more frequent and severe, there will only be so much we can do to control them.

“There’s always a shortfall between climate change and people’s ability to engineer or adapt,” Oppenheimer said. “Eventually, if we don’t control emissions, we won’t be able to adapt.” 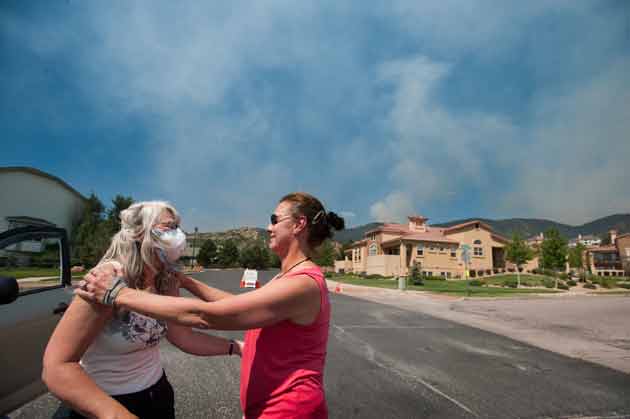 Correction: An earlier version of this article incorrectly stated that the photo taken from the UC-Boulder parking lot was of the High Park Fire. The sentence has since been fixed.