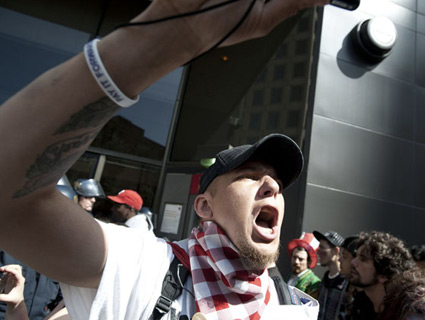 By most estimates, the Occupy movement’s May Day protests were a resounding success, with demonstrations held in more than 100 cities and a march in Manhattan that drew some 30,000 people—more than any Occupy event last fall. But if the movement is going to sustain the kind of momentum that captured the nation’s attention six months ago, it must begin to evolve in a different direction. Occupy’s much-hyped Phase 2, the “American Spring,” suggests an end game that’s virtually impossible in today’s America: the toppling of a corrupt political system under the sheer weight of its own repression. Unlike in Egypt or Tunisia, the only real revolutions in our comparatively affluent nation have ultimately been won or lost at the ballot box.

For months I’ve devoted myself to reporting on Occupy Wall Street, but I haven’t shared many of my own views of the movement until now. I see myself foremost as a reporter, not a pundit, and I also thought that other observers were too quick to judge. I have the utmost respect for original OWS organizers such as Marissa Holmes, Sandy Nurse, Amin Husain, Nicole Carty, and Jason Ahmadi, to name just a few, who took the art of calling bullshit on the political system way further than the chattering classes thought it could go. Instead of handing over the movement to the Professional Left, they effectively gave the reins to anyone who felt disenfranchised. Their famously nonhierarchical General Assembly and working groups might have been unwieldy, but they’re also what lent OWS its legitimacy as a true movement of and for the 99 percent.

In the early days of the General Assembly, Occupy Wall Street seemed poised to grow in any number of directions. There were people who wanted to make concrete political demands or get involved in electoral politics, and people who didn’t. Yet the meetings were long and tedious, and those who slogged through them all winter more often than not tended to be the same kind of people who’d first slept in the park, which is to say, radicals, often anarchists, who believed that engaging with the political system would only legitimize it. Still, many of them were happy to collaborate with more mainstream groups, such as labor unions, on protests against common enemies like Wall Street.

For a while I believed that this kind of limited partnership could be enough to keep the Occupy movement relevant. The thinking goes that the protests will gradually win over more Americans, growing in size and frequency to the point that corporations and elected leaders, whoever they are, will somehow be forced to respond. This has certainly happened to a degree, with Occupy protests arguably playing a role in extending a millionaire’s tax in New York state and helping to convince the shareholders of Citigroup to vote against a cushy pay package for CEO Vikram Pandit. Still, that’s pretty small potatoes compared to all the press Occupy got this fall, which could be why the press and most Americans have mostly stopped paying attention since then.

If May Day somehow leads to major political victories for Occupy, it will be the first time that an American social movement has caught fire without sending its own guys to Washington. “There really isn’t any precedent for that,” Michael Kazin, a Georgetown University professor who studies social movements, told me last month. Though politicians don’t always fulfill their promises, history shows that social movements tend to advance when they help elect people who at least feel compelled to listen to them. Lyndon B. Johnson was not seen as a great progressive in the ’60s, but his time in office coincided with the civil rights and anti-war movements. Obviously, the left hasn’t fared as well under Republicans.

Since the Occupy movement probably can’t stomach campaigning for Obama, it could instead loan its 99 percent message to MoveOn.org and the unions and progressive PACs, who are already hammering Mitt Romney as Mr. 1 Percent. But while occupiers are justifiably skeptical of Obama, they’re also unjustifiably paranoid about being co-opted by Obama supporters, to the point that Adbusters, the magazine whose call for protest helped spark Occupy Wall Street, recently blamed MoveOn for the “derailment of our movement.”

Occupy activists, many of whom don’t have a lot of experience with politics, seem to think that MoveOn is taking its orders from the White House. In reality, MoveOn polls its 7 million members on which candidates to support, and it often runs campaigns to unseat Blue Dog Democrats when it thinks a more progressive candidate has a shot at winning. But whatever. What Occupy really ought to do if it intends to live on is plunge directly into electoral politics on the local, state, and congressional level. It ought to co-opt the Democratic Party.

Though Occupy could support many sympathetic candidates in Democratic primaries, some pundits haven’t pushed the idea because they worry about a tea party effect on the left, with liberal Democrats losing to Republicans in the general election. Yet other than a third-party bid, with its potential for another Nader debacle, this may be the only way to command Washington’s attention. Many occupiers believe it’s futile, however, because they’d never win against an avalanche of unregulated corporate political spending.

Maybe they’re right, and I’m wrong.  Maybe it’s too late now that the Occupy brand has lost some of its early resonance. But I’d like to think that now’s the time to consider a true diversity of tactics. Occupy has drawn attention to the rigging of the political system by boycotting it. Now it can campaign against that political system—against Washington—by working to elect people who will unrig it. Forget “Hope.” Think of it as another iteration of the popular Occupy placard: “Unfuck the world.”