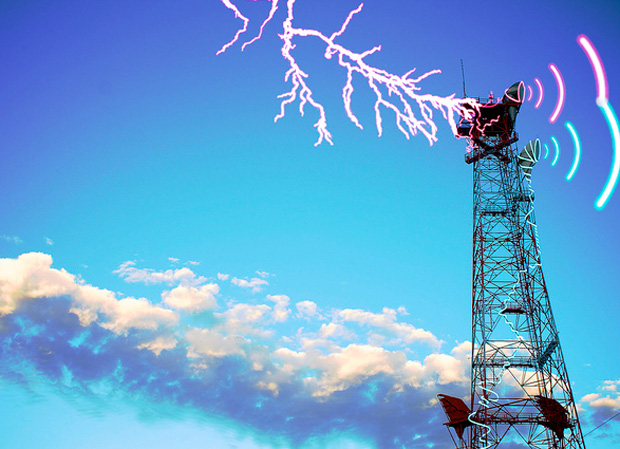 Prepare for an incoming transmission: Flickr/Steven HegerLate last Friday, Buzzfeed reporter and Rolling Stone contributor Michael Hastings broke what looked like a big scoop: Congress was quietly planning to lift a 64-year-old law preventing the US government from using propaganda on its own citizenry. Before the House passed its defense budget bill Friday afternoon, Hastings reported, a bipartisan group of congressmen tacked on an amendment that would “essentially neutralize” a set of time-tested guidelines “that had been passed to protect U.S. audiences from our own government’s misinformation campaigns.”

Progressive thinkers balked at the news: Mideast expert Juan Cole decried the amendment as “the creeping fascism of American politics…by our representatives, who apparently have never read a book on Germany in the 1930s-1940s or on the Soviet Union in the Stalin period.” On civil libertarian Jonathan Turley’s site, guest blogger Elaine Magliaro asked: “How about some propaganda for the people paid for by the people being propagandized?”

But the outcry in this case seems misguided. For starters, the proposed law doesn’t permit the spread of any information that isn’t already available to the American public. Moreover, the amendment could conceivably bring more of the government’s overseas information operations into the sunlight, a good thing.

The actual text of the amendment, authored by Reps. Mac Thornberry (R-Texas) and Adam Smith (D-Wash.), modifies the Smith-Mundt Act of 1948. That bill was the first to establish a post-World War II “public diplomacy” role overseas for the State Department and US media organs—think Voice of America and Radio Free Europe—but the law also barred those agencies from disseminating their “good news” to audiences at home in the United States.

The amendment from Thornberry and Smith “updates” Smith-Mundt by lifting that ban, and it also clarifies that it never applied to other government agencies, including the Department of Defense. That, according to a concerned anonymous Pentagon official who spoke with Hastings, “removes oversight from the people who want to put out this information.” (It’s worth noting that Smith also sponsored bipartisan amendments in the defense bill to end indefinite military detention of inmates and address the problem of sexual assault in the service.)

The absurdity here is that a simple web search will turn up much of this “forbidden” content.

The argument against Thornberry’s and Smith’s amendment appears to be pretty straightforward: We only want US propaganda peddled to foreign populations, but not to our own! In reality, though, most “public diplomacy” is mundane boilerplate about America’s purple mountains’ majesties. (And a lot of it is laughably ineffective. I should know: I spent nearly a year preparing upbeat, if technically accurate, press releases for the US Army in Iraq about Sunni militias reconciling with the Shiite-dominated government. Four years later, the two sides still don’t get along very well.)

Furthermore, there’s some value to knowing how the United States articulates itself to the rest of the world. In this regard, Smith-Mundt’s provisions have been a bureaucratic headache for sunshine activists: Federal courts have long held that, under the existing law, the State Department and associated US agencies don’t have to honor Freedom of Information Act requests from US citizens for records “when those records or information have been prepared by the Agency for audiences abroad.” Want to request a transcript of a Voice of America radio broadcast? Sorry, you’re not allowed. In fact, only members of Congress are legally permitted to receive any of this information. (ProPublica keeps a database of records requests that have been turned down on these grounds.)

The absurdity here is that a simple web search will turn up much of this “forbidden” content: Just check out the websites for Voice of America (VOA) and Radio Free Europe/Radio Liberty, or listen to Radio Sawa, Uncle Sam’s Arabic-language news station, online. (You paid for ’em, after all.) And anyone who thinks the military doesn’t already dabble in domestic propaganda has never watched a Pentagon press conference, viewed a Marine recruiting ad, or seen an admiral justify his budget in a congressional hearing. Beyond that, Smith-Mundt has nothing to say about self-promoting PR emanating from other government entities—say, the White House, Capitol Hill, or the FBI.

In fact, Smith-Mundt’s origins were rooted in a desire to censor the State Department on the home front, placating members of Congress who distrusted it on ideological grounds. In the lead-up to the bill’s passage in 1948, conservative Democrats and Republicans alike argued that the US government’s foreign affairs staff had been infiltrated with communists and couldn’t be trusted. Rep. Christian Herter (R-Mass.) demanded guarantees from a State Department official that VOA was “not being used as a vehicle for distribution of left-wing philosophy and social and other ideas that many Republicans regard as dangerous.” Eugene Cox (D-Ga.) attacked State as “chock full of Reds” and “the lousiest outfit in town.”

A different strain of conservative political activism on the issue reared its head in the 1990s. As one communicator from the now-defunct US Information Agency told a media researcher in 1994, congressional Republicans chafed at allowing a Clinton-run government agency to articulate the Democratic administration’s goals. “[T]hey’re unhappy with the policies, and they read the VOA editorials saying what we’re doing or not doing in Somalia or Bosnia, for example, and they go up a stump about it,” the official said. “It’s one thing if the editorials are intended to be available for foreign audiences. But if they are readily available and are in fact distributed as well to folks in North Carolina, you can bet your bottom dollar we’re going to have problems with Sen. Helms and others.”

Does its checkered past mean that Smith-Mundt should be repealed outright? Even purveyors of “public diplomacy” who favor updating the law think there’s value in its long-standing division between foreign and domestic PR roles. “Tear down that firewall, and it will be a matter of time before resources and personnel who focus on talking about America overseas are diverted in favor of domestic ‘public affairs,’ the short-term political imperative of any administration,” Gregory Garland, a foreign service officer, wrote in 2009. “In other words, given the choice about writing about jazz for a world hungry to know about America’s unique art form, or a presidential news conference, guess which will win? Smith-Mundt protects us from that false choice.”

But realistically, in the internet age, such a firewall is now essentially meaningless; anybody in the United States (and in many other places) can access most of this otherwise open info. And isn’t the American public capable of sorting through self-serving state PR? (As Cole points out, even government officials seeking a minority report have praised him “for having an accurate bull crap meter.”)

Of course, we should never be too cavalier about powerful entities—governments, corporations, individuals—being able to shape perceptions with manipulative media. But rather than acting shocked, shocked! to find that there’s government propagandizing going on in the media, perhaps progressives can keep doing what they’ve always done best: expose the pablum and its purveyors, and use the truth to put them in their place.