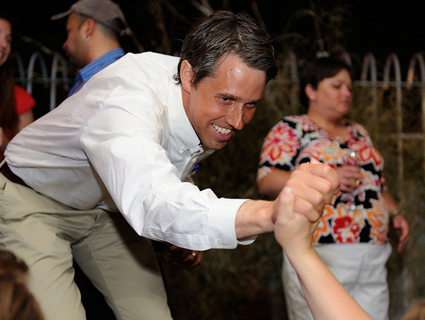 Of the 133 incumbent congressmen who have faced primary challenges from non-members so far in 2012, 130 of them have won. On Tuesday, former El Paso city councilman Beto O’Rourke scored one for the challengers when he knocked off eight-term Democratic Rep. Silvestre Reyes. It was close—O’Rourke avoided a runoff by just 213 votes—and not entirely expected. As one political consultant told the El Paso Times, “Usually you have to have a gay sex scandal or a federal corruption indictment for an incumbent to lose.” Observers, myself included, framed the race in part as a referendum on the Drug War, because of his and Reyes’ contrasting viewpoints on federal policy. But in an interview on Wednesday, O’Rourke sought to define the victory in more conventional terms.

“What’s interesting is you guys always pick marijuana—I think, frankly, because it’s sensational and it’s kind of exciting to people,” O’Rourke says, referring to my profile of the race and a similar piece in the Huffington Post. “It has not once been an issue of any significance at all. Call 100 El Pasoans and you might find two or three who made their decision based on that issue.” Instead, he says, he won by emphasizing a bread-and-butter economic agenda. “They were the issues that you might not be surprised but are the same anywhere,” he says. “We have 10 percent unemployment [and] more than 30,000 people out of work. We have a V.A. that is supposed to serve nearly 80,000 veterans. It was recently ranked the worst in the country. People can’t get in to see the doctor; they can’t get the care they deserve. We need a full service V.A. hospital.”

But the idea that the War on Drugs could be a non-issue in the primary is itself noteworthy. For years, drug policy has been a third rail, and O’Rourke hopped all over it. It’s the subject of his 2011 book, Dealing Death and Drugs, and was the impetus behind his only major showdown with Reyes prior to campaign—the congressman’s behind-the-scenes efforts to scuttle a city council resolution calling for a re-examination of the War on Drugs (as detailed in my earlier piece). Reyes tried very hard to make O’Rourke’s views on marijuana a factor in the race, but it didn’t catch.

“What [Reyes] did, as you know, is took a principled position that many of us have in this community about the fact that the Drug war has failed us and particularly failed Ciudad Juarez and our effort to find something better for everyone who’s affected by this failure, and made it about ‘Beto wants your kids to take drugs,’ ‘Beto wants to legalize drugs,'” O’Rourke says. “One of his surrogates who stood in for him at a debate said that I wanted to legalize crack cocaine. So he tried to but people are smarter than that, the voters are smarter than that and they see through to what the real issues are…”

O’Rourke’s campaign had some help in the final week of the campaign from the anti-incumbent super-PAC, Campaign for Primary Accountability, whose attack ads Reyes blamed for his defeat. O’Rourke demurred when asked about the group’s influence, noting that exit polls conducted during early voting—before the CFPA revved up its ad campaign—showed O’Rourke beating Reyes at a clip nearly identical to the final margin. Still, in a race that close, the PAC didn’t need to move mountains—only a couple hundred votes.

O’Rourke will face businesswoman Barbara Carrasco, the Republican nominee, in the November election, but he’s widely expected to cruise to victory in a district that gave 66 percent of the vote to President Obama four years ago.