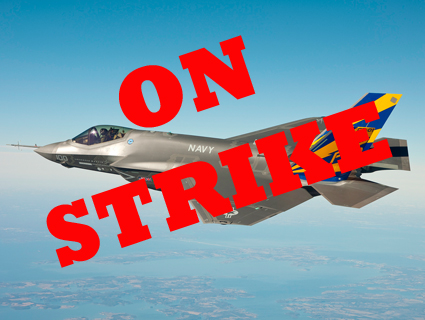 The union builders of one of the Pentagon’s priciest pieces of equipment are going on strike, threatening the beleaguered trillion-dollar program and the Beltway contractors who are counting on it.

Last Sunday, workers at Lockheed Martin’s Fort Worth, Texas, construction plant voted by more than a 9-to-1 margins to strike for better conditions. The plant’s 3,600 union machinists handle most of the parts and assembly for the F-35 Joint Strike Fighter, an over-budget, under-performing, behind-schedule fighter jet that’s on record as one of the biggest wastes of money in Pentagon history.

At 12:01 a.m. this morning, members of the International Association of Machinists and Aerospace Workers Local 776 walked off the job. At issue was Lockheed’s proposal to slash pensions and health-care programs for new hires and rehired machinists. “But there are other things that are still open on the table that are unacceptable,” union president Paul Black told MSNBC. Workers are ready for a lengthy work stoppage, according to the Ft. Worth Star-Telegram:

Nick Hight, an 8-year Lockheed employee, said he was willing to strike for weeks if necessary over the pension issue. “No pension for new hires, that’s not good. What if my granddaughter wanted to work here.”

“They keep taking things away from us,” said Kim Nguyen, an aircraft assembler who has worked 15 years at the Lockheed plant. “They’ve gotten too greedy. We’ve got to fight for something.”

It’s not like the laborers are trying to get blood from a stone: Thanks largely to the F-35 program, Lockheed is the single biggest defense contractor in the United States, with $17.34 billion in federal projects per year—more than “Beltway bandits” KBR, Boeing, and General Dynamics combined. So far, Lockheed’s made $400 billion off the F-35, despite cost overruns and concerns over the craft’s airworthiness that have delayed its delivery for service, first slated for 2010.

A spokesman for Lockheed only told the Star-Telegram that the company considered its final offer to the workers “equitable,” since its equally profitable competitors “no longer offer defined benefit pension plans to new hires.” In contrast, Lockheed CEO Robert Stevens made $25.4 million last year, including a $4.7 million bonus—a 16 percent increase over his 2010 compensation, even though company earnings fell 8 percent in the same period, according to SEC filings. Of course, as my colleague Josh Harkinson has reported, some of America’s most successful CEOs have always gotten rich by squeezing workers. But defense contractors rarely get the same scrutiny as bank, insurance, and retail executives.

Could a lengthy strike further delay the F-35? Maybe; Lockheed reports no effects on its assembly line so far, though it has notified the military services that there could be problems delivering the jets on time. But with conservatives on a renewed hunt for communists and the House Armed Services Committee meeting this week to discuss the annual defense budget, expect Republicans to defend their No. 1 private contractor while tossing a couple of barbs at those “unpatriotic” union workers down in Texas.