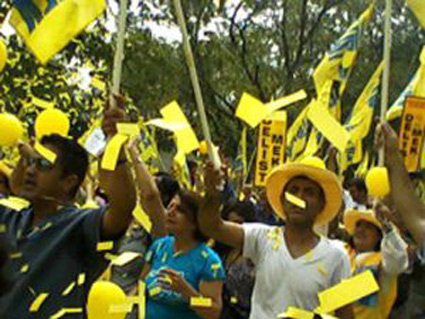 Last December, Mitt Romney claimed that he had never heard of the Mujahedin-e-Khalq, an Iranian dissident group that’s drawn prominent American defenders despite being labeled by the State Department as a terrorist organization.

Romney’s ignorance was surprising: Mitchell Reiss, his foreign policy adviser and a known Mujahedin-e-Khalq supporter, had spoken at a MEK rally just the previous weekend.  Now it’s another adviser to his campaign, Michael Mukasey, who’s voicing his support for the MEK. At an event in Paris last week, the former Attorney General spoke passionately against a recent Treasury Department investigation into the terrorist group.

MEK’s supporters have included Andrew Card, Howard Dean, John Bolton, Rudy Giuliani, Bill Richardson, Wesley Clark, and many others. And the MEK has treated some of them very nicely. According to a March report by NBC’s Michael Isikoff, pro-MEK speakers can earn up to “$30,000 or more per talk and first-class flights to European capitals.” (The office of former Pennsylvannia Governor Ed Rendell, just one such speaker, told Isikoff that he’d earned $160,000 in 2011 for speaking at MEK-sponsored events.)

But the money might come with a very big string attached: if the feds were to contend that someone’s public support of the MEK was tied to payment, the speaker could run afoul of U.S. laws prohibiting material support to terrorist organizations.

The MEK, which has directed bombing campaigns in Iran, has spent the last year pushing the State Department to take their name off its terrorism list. The campaign included a visit to the U.S. Court of Appeals for the District of Columbia Circuit where the MEK attempted to get the Court to order the State Department to remove them.

At last week’s Paris event, Mukasey said he and his fellow MEK supporters in attendance would not back down despite the government’s investigation: “The people here aren’t afraid. Rudy Giuliani, John Bolton, Patrick Kennedy, Tom Ridge, they’re all sitting up there behind placards that have their names on them. We all use our names.”

While the government has not commented on suggestions that the supeonas are related to MEK’s lawsuit, earlier in his speech, Mukasey insinuated that the State Department asked the Treasury Department to get the speech records as a means to intimidate prominent MEK supporters from filing briefs on the group’s behalf. “I stopped believing in coincidences like that when I stopped believing in the Tooth Fairy, and that was a long time ago,” Mukasey joked.

Isikoff’s report last month quoted an Obama administration official explaining the reasoning behind the investigation: “This is about finding out where the money is coming from. This has been a source of enormous concern for a long time now. You have to ask the question, whether this is a prima facie case of material support for terrorism.”

At the end of his speech, Mukasey, who has brought in former Solicitor General Seth P. Waxman to defend the officials under investigation, delivered a polemic against the US government.