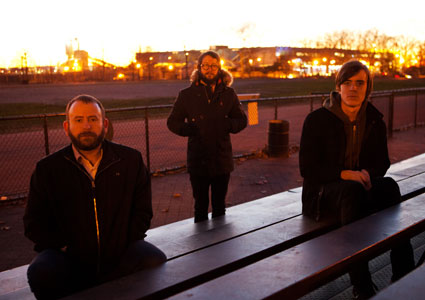 Yellow Ostrich started out in 2009 as a solo project of front man Alex Schaaf, who recorded his first album, Wild Comfort, on a drum machine in his Wisconsin bedroom. On his second full-length, last year’s critically acclaimed The Mistress, Schaaf brought in drummer Michael Tapper, of the band Fool’s Gold. Along the way, Schaaf kept busy recording quick-turnaround EPs, all of which are up on his Bandcamp.

With this new album, Strange Land, Yellow Ostrich finally achieves “real band” status, as Schaaf—who’s now based in New York—and Tapper are joined by multi-instrumentalist Jon Natchez, whose stints with Beirut, Camera Obscura, Okkervil River, and The Antlers led NPR to call him the most valuable sideman in indie. The introduction of guitar and heavier drums lends a welcome edge to YO’s earlier poppy lightness. And Strange Land moves more into the realm of conventional indie rock than Yellow Ostrich’s previous low-fi electronica, while still keeping enough of the latter to give it a distinctive sound. 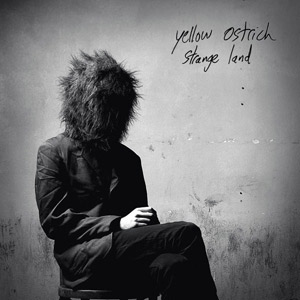 On “Stay at Home,” Schaaf says he’ll stay inside to “hide from you,” but the rambunctious guitars suggest otherwise. “Daughter” starts off with a steady riff that’s joined by a decisive beat as Schaaf declares “we’ll make it complicated for you.” “Up in the Mountains” builds to a frenzy of guitar and drums as Schaaf sings of longing to get away from it all: “I will leave behind all the people who’re making me sigh / I’ll be gone / Maybe you’ll be there too / It’s up to you.” His looping sound is more apparent on tracks like the standout “Marathon Runner” and “I Want Yr Love,” which sounds closer to Yellow Ostrich’s earlier work than anything else on the album. “Wear Suits” eschews the guitar riffs for an airier sound; Schaaf’s voice is high and distant as he sings “wear suits / and talk about the futures / of all your children / sing of serious things that kill you.”

Meanwhile, Natchez’s chops shine on songs like “When All is Dead,” where a tangle of horns swells to a melancholy crescendo. Schaaf has described his previous work as “a guy in a bedroom” and the most recent incarnation of Yellow Ostrich as a band “in a slightly bigger room.” Judging from a tight set at a recent sold-out show in San Francisco, small venues are where Yellow Ostrich shines.

You can give the full album a listen over at Paste, where it’s still streaming, and check out the group’s tour dates here.