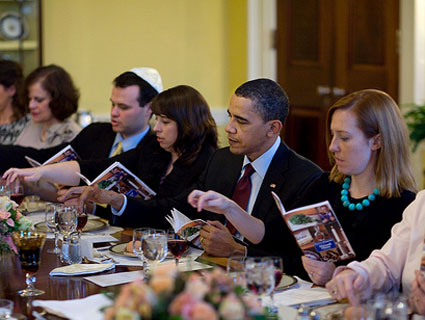 The Public Religion Research Institute released the results of its comprehensive survey of American Jews on Tuesday. The group found that President Barack Obama retains “nearly identical to levels of support…among Jewish registered voters” to “a comparable point in the 2008 campaign.” That’s despite incessant, unending, shrieking speculation that Obama’s fumbled attempts to resolve the Israeli-Palestinian conflict would cause American Jews—one of the most liberal demographics in the country—to suddenly decide they’re anti-abortion rights or want to see Social Security privatized.

The PRRI survey utilizes a large sample size of American Jews—more than 1000 registered Jewish voters responded to the group’s questions. A plurality of these voters, 46 percent, cite “commitment to social equality” as the quality most important to their Jewish identity, while only 20 percent say the same of support for Israel, the issue Republicans have sought to use as a wedge against the president. To the extent that there’s any disillusionment among American Jewish voters, it’s small: According to the survey, “only 7% of Jewish voters who supported Obama in 2008 say they would prefer to see a Republican candidate win the 2012 election.” Sixty-two percent of Jewish voters want to see Obama re-elected. If Obama’s approval were the same among white voters generally as it is with Jewish voters, he’d be running away with the 2012 election.

The speculation that Obama’s approval rating among Jews is directly related to policy on Israel is itself a reductive stereotype. As George Washington University Professor John Sides wrote last year when polls showed American Jewish support for Obama declining, “The fixation on a trend among one group is doubly misleading because it gets your mind thinking about explanations idiosyncratic to that group.” So when the economy looked like it wasn’t improving at all, a dip in American Jewish support was read as the result of Middle East policy, rather than as a result of the same reason everyone else was giving Obama lower approval ratings.

This reoccuring non-controversy and speculation about the American Jewish vote has little to do with its actual influence on elections, which is fairly small. Instead it’s about constraining the political space any American president has to pursue an equitable and peaceful solution between Israelis and Palestinians. That’s why, despite being repeatedly debunked, the narrative that American Jews are about to defect en masse to the Republican Party will never permanently be put to bed. There’s a funny irony here, though: If Republicans ever actually succeeded in getting pro-Israel Democrats to abandon their party, bipartisan support for Israel in Congress would be adversely affected.