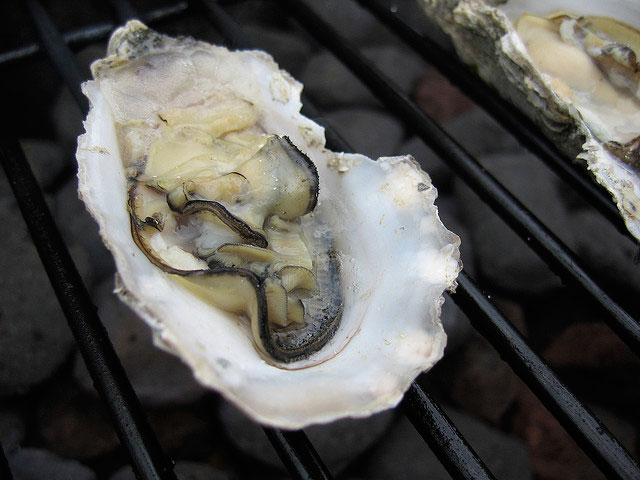 On the second anniversary of the Deepwater Horizon explosion, evidence of the spill’s ongoing impacts on Gulf people and ecosystems continues to mount. As if eyeless shrimp, toxic beaches, and dead dolphins weren’t bad enough, a new study suggests that Gulf oysters are also in trouble.

A team of scientists led by Dr. Peter Roopnarine of the California Academy of Sciences says that oysters in the Gulf contain higher concentrations of the heavy metals found in crude oil now than they did before the spill. Using a method known—awesomely—as “laser ablation inductively coupled plasma mass spectrometry,” the scientists vaporized oyster shells and ionized them, separating out different elements according to their mass and making it possible scientists to identify them.* They measured higher concentrations of vanadium, cobalt, and chromium—three heavy metals present in oil—in the oysters sampled after the spill. Even more worrisome, the team found that 89 percent of post-spill specimens displayed the signs of metaplasia, a condition in which tissues are transformed in response to stress. Oysters suffering from the condition often have trouble reproducing, which could have worrisome implications for oyster populations and the species further up the food chain that depend on them.

Scientists don’t yet know how trace metals like those found in the oysters move through food chains, or what effects they could have on high-level consumers, including people. This study is just the start of a broader effort to understand the impacts of heavy metals on Gulf ecosystems: the team is planning to conduct a similar analysis of mussels, and hopes to model the potential impacts of the spill on the Gulf food web. For now, though, the study provides more evidence that the oil spill’s effects are still being felt, and are likely to continue long into the future. The findings are particularly troubling in light of past studies indicating that the combination of heavy metal pollution and warmer temperatures is especially deadly for oysters—a fact that doesn’t bode well in an age of warming seas.

It’s yet another piece of bad news for Louisiana’s oystermen, who are still struggling to recover from the double whammy of Katrina and the BP spill, and faced with consumers afraid to eat the oysters they do manage to harvest. For many, particularly in the African-American, Cajun, and Croatian communities, oyster fishing is a tradition stretching back generations; for them, the long-term effects of the spill threaten to put an end to a way of life with a proud heritage. It’s also bad news for the state’s economy, which reaped around $300 million from oyster sales in good years before the spill. And of course, it’s bad news for lovers of the region’s iconic sandwich, the oyster po’boy.

One bright spot amidst the often-bleak Gulf Coast news comes in the form of the RESTORE Act, which has been slowly winding its way through Congress over the past year. If enacted, it would deliver much-needed funds—80 percent of BP’s Clean Water Act fines—to coastal communities and coastal restoration projects; fingers crossed that the bad news about ongoing ecosystem and social impacts will have a silver lining in the form of greater impetus for the act’s passage.

Correction: The original version of this article stated that the elements were identified according to the light that they radiated rather than their mass. Thanks to a commenter who pointed out the error, it has been corrected.