Five months ago, the people of South Ossetia, a Georgian breakaway province, cast votes for their next president. Russia—the territory’s controlling nation—had endorsed a candidate, but the majority went instead to former education minister (and anti-corruption advocate) Alla Dzhioeva. But her presidency was short-lived: The Supreme Court declared the election invalid, citing polling violations, and set a do-over election date—from which Dzhioeva was barred from participating. This week, Leonid Tibilov, a former KGB agent, won the new election.

South Ossetia is one of three contested republics in the Caucasus region. Its election chaos illustrates the impasse faced by these territories: All are trying to form autonomous nations, yet they can’t build government without a stamp of approval from one of the only countries in the world that recognizes their nationhood. Their independence depends on Russia’s support.

The Caucasus region, which straddles the Europe/Asia border, houses a medley of religions and ethnicities, from the Indo-European Ossetians to the Christian Armenians and the Muslim Azerbaijanis. During the USSR era, all that barely mattered; the Soviet identity subsumed regional and sectarian differences. But since the Soviet Union’s fall in 1991, rival factions, finally able to assert their singularity, have clashed over competing claims to overlapping homelands.

The first to rise up was Nagorno-Karabakh. The Azerbaijani territory, which is populated largely by Armenians, declared its independence in the thick of the USSR’s December 1991 dissolution. A few months later, South Ossetia—where several Indo-Iranian dialects are spoken—won partial autonomy from Georgia in a bloody war. And they prevailed mostly because Georgia was distracted by the separatist movement in Abkhazia, another breakaway province, which gained independence in a 1992 conflict that claimed nearly 10,000 lives and displaced a quarter million people.

Today, these territories exist in a legal no-man’s land, largely unrecognized by other nations, and often dependent on neighboring states, primarily Russia, for survival. Over two decades, they’ve balanced self-protection with haphazard nation-building. Armed clashes with anti-secessionist forces are frequent, though rarely publicized in Western media.

“My aim was to document the transitional state of these unrecognized republics in the region,” he explains. “In the beginning, my task seemed simple. What I did not take into account was that over a period of three years, not only my story, but my way of seeing, was subject to transformation.” He continues:

Most frequently I was simply sitting with people over a table, drinking, sharing food and the stories of our lives. I often told them about my family, my aspirations, of my upcoming wedding…in return, they loved and understood me as much as I’d come to love and understand them.

I did not want to compromise a single detail, the smallest nuance of the stories shared for the privilege of turning on a microphone, reaching for my camera or even taking out a pen. So, I was not working, I was not acting as a photojournalist…because when interaction is so warm and intimate, I feel it would be unfair to just take these heart-told stories and package them for retail.

Nevertheless, Mirzoyan did take occasional photographs. But he didn’t depend on them: Mirzoyan also recorded sounds, wrote in notebooks, or sketched subjects who didn’t want to be photographed. “I confess to photography being my excuse, my rationalization for these repeated trips,” he explains. “[But] my aim is not to document. I just wanted to see for myself, to listen and understand.”

This photo essay presents an excerpt of Mirzoyan’s attempt at understanding life in the Caucasus’ transitional pockets.

Part One: The Nagorno-Karabakh War: Past, Present, and Future 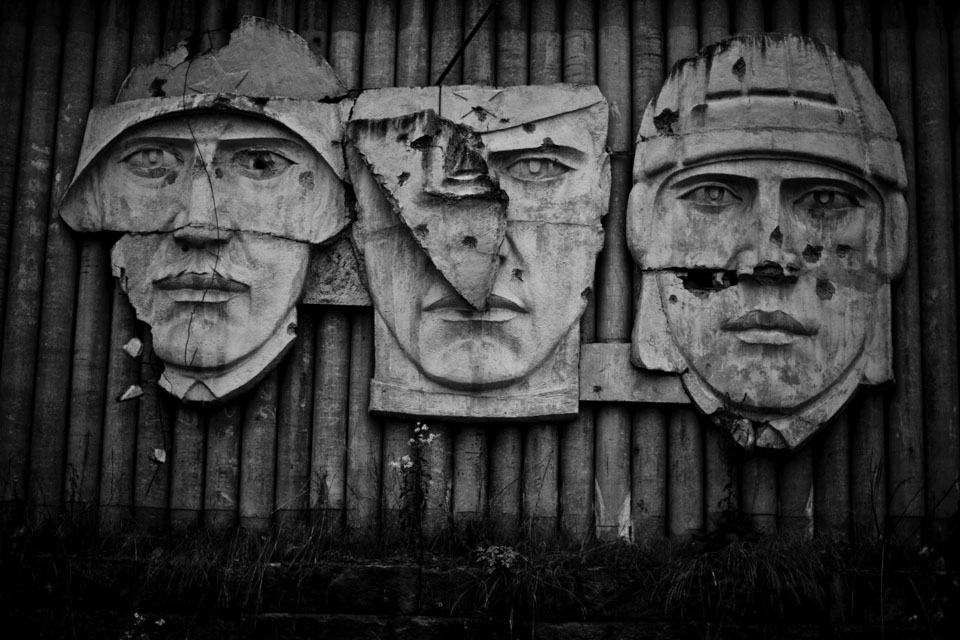 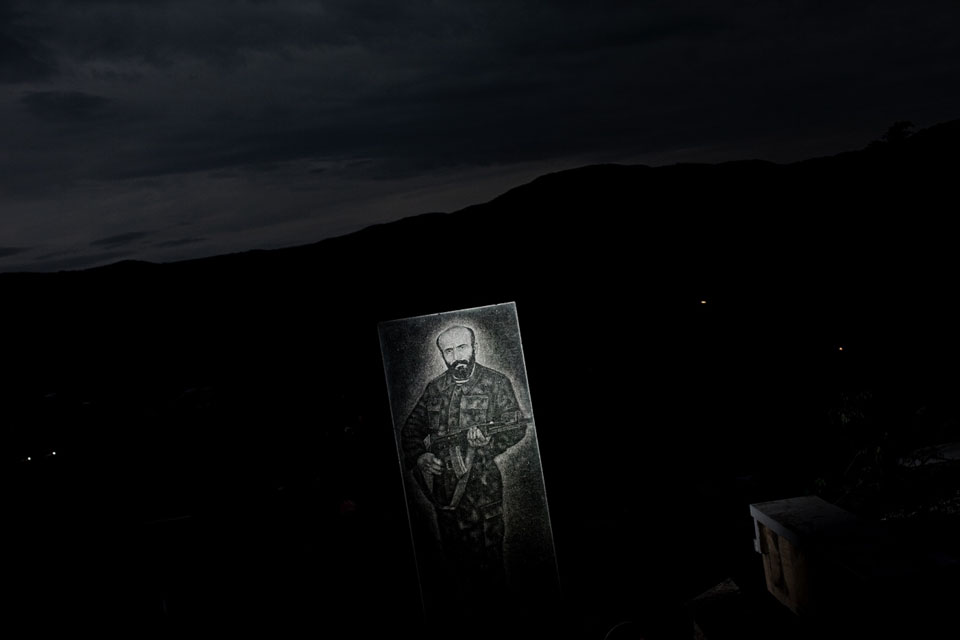 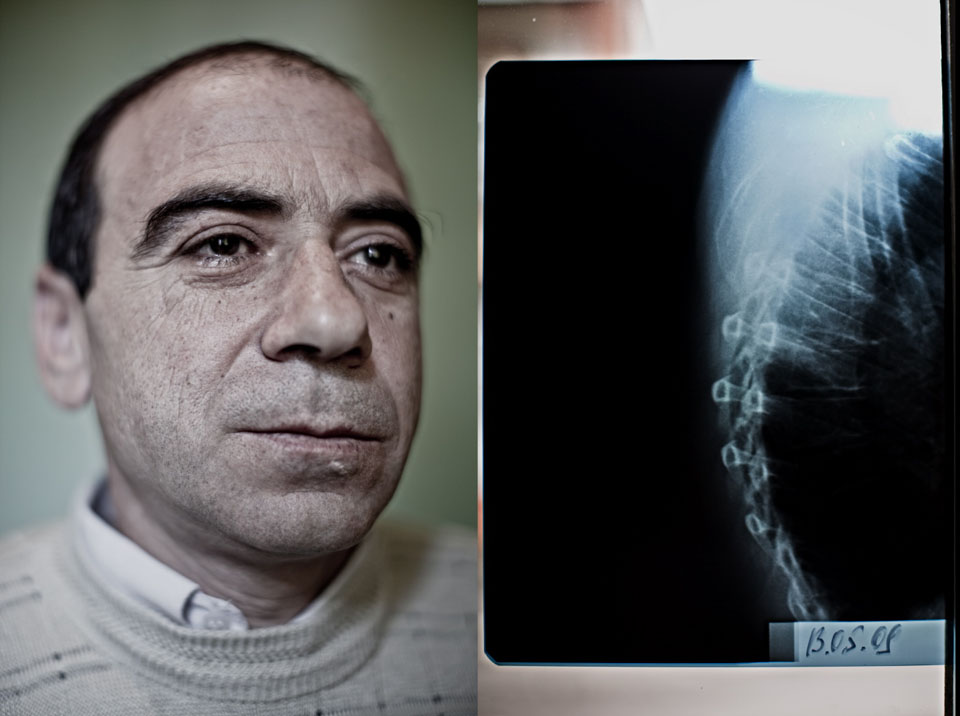 Present: Karabakh, 2009. Shiraz Hakobyan, 44 years old. He is a sniper who fought in Martuni, Berdashen, and Aghdam. In December 1992, he suffered a chest injury when a car ran him over in Mardakert. Today, Shiraz also endures post-concussion migraines. 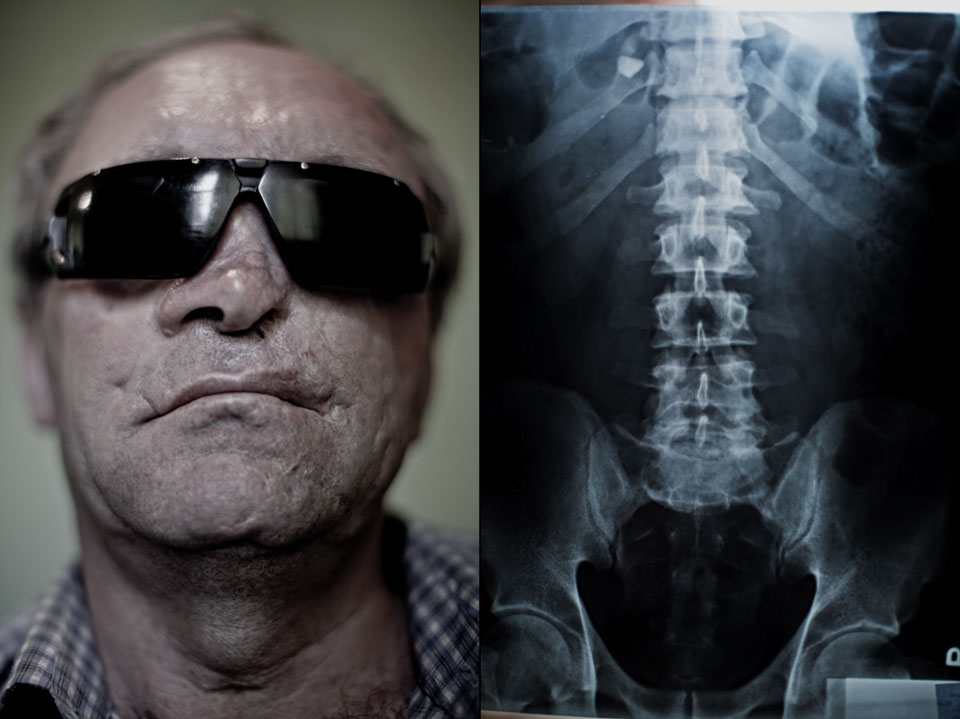 Present: Karabakh, 2009. Felix Beglaryan, 50 years old, has sustained two injuries, including an anti-tank mine explosion in 1993 that destroyed his face. 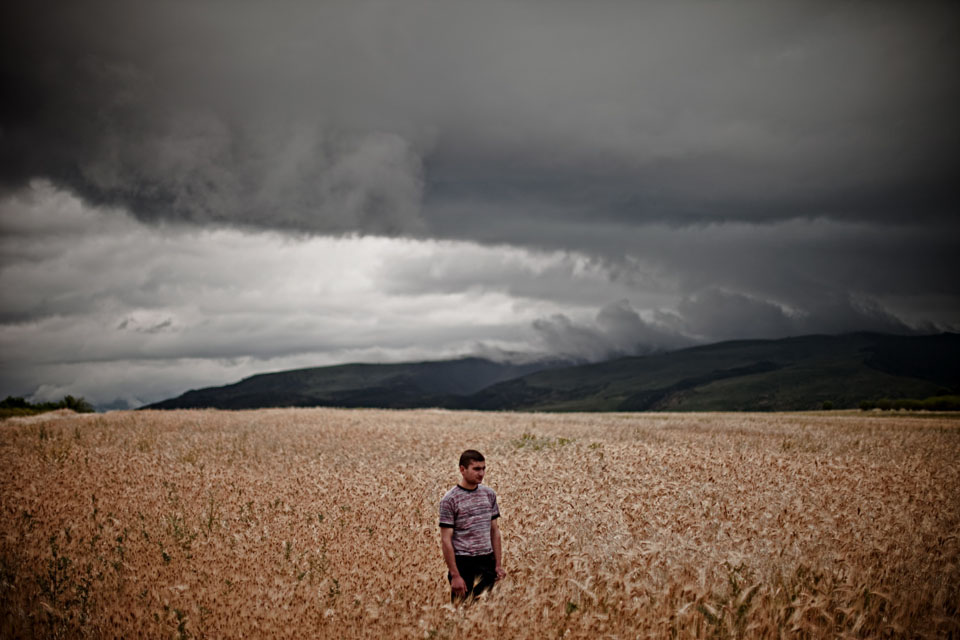 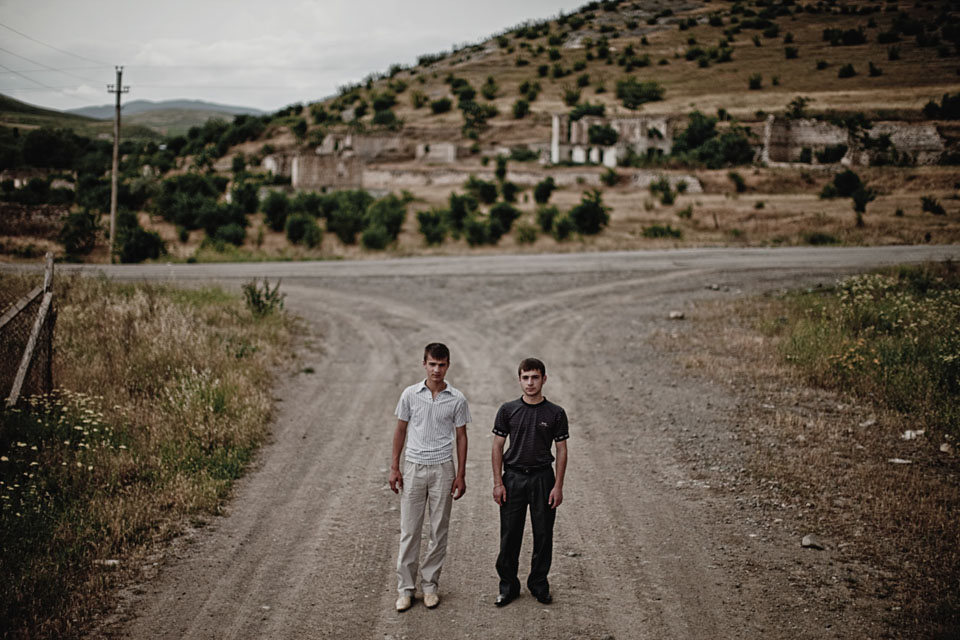 Future: Mardakert, 2009. Nikolai Hayrapetyan, 18 years old, and Vahag Hayrapetyan, 17. Their father, Garegin, was killed at age 31 on this crossroad. 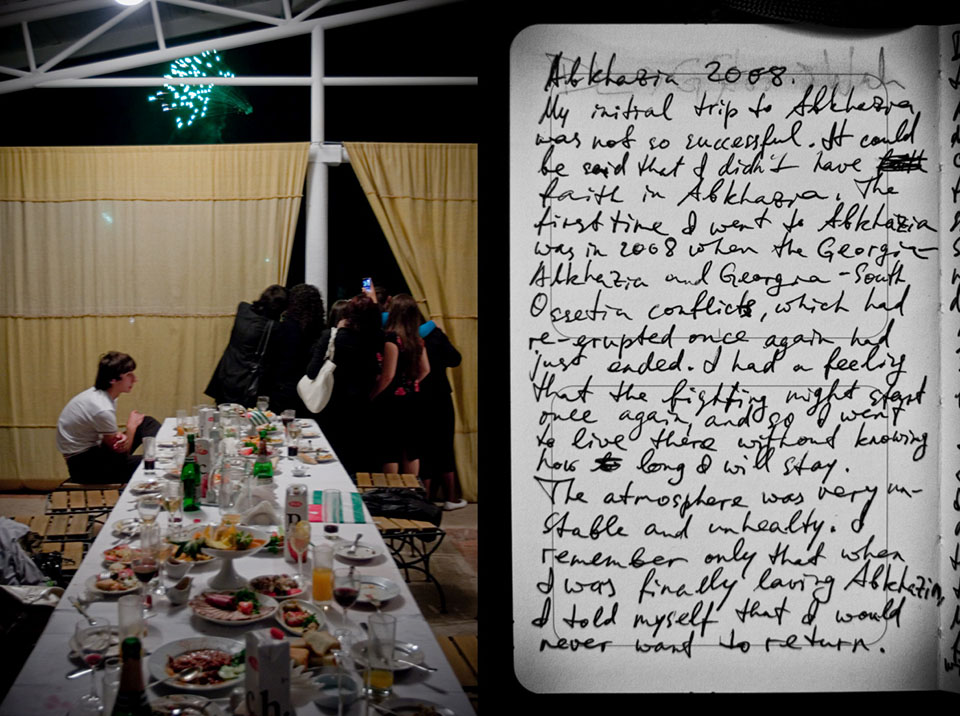 Mirzoyan went to a restricted area near the border to see where the Russian soldiers and Abkhaz forces were stationed. He’s not allowed to reveal their names or the military post.

Abkhazia. Natalia Stepanovna lost her son with no grave to mourn and no proof of his life other than a package of photos.

Abkhazia. Avedyan Maria Miranovna lost her son as well, left only with photos to remember him. 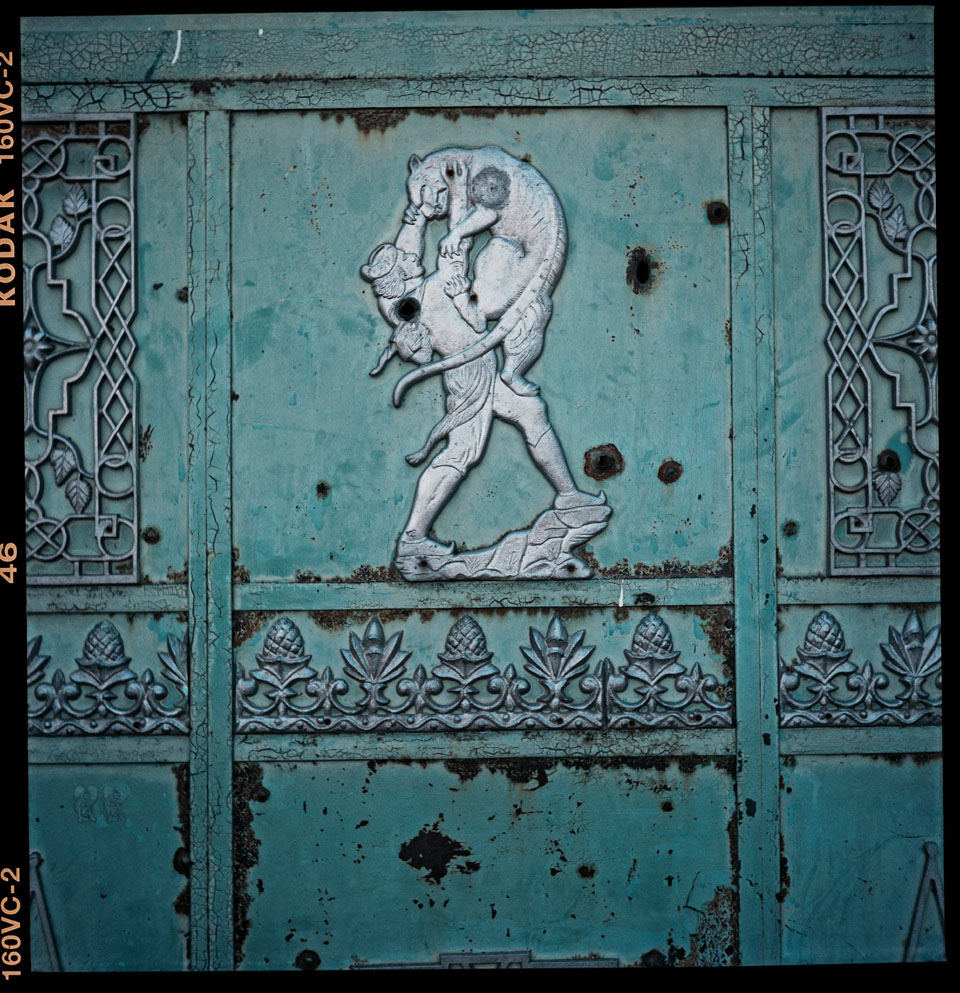 Before the war, South Ossetia asked its citizens to turn in their weapons voluntarily. When the Georgian military attacked, many families had no means of self-protection. After the war, another call went out for citizens to disarm; this time citizens are hiding their weapons from the Federal Security Service. 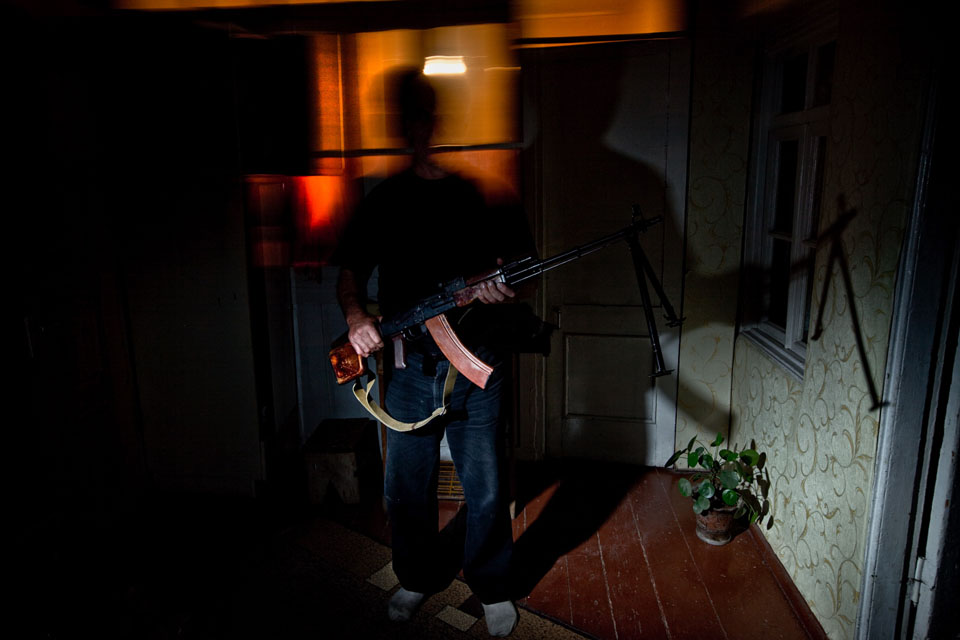 South Ossetia, 2009. T. is a professor of journalism. He has been on the frontline of all South Ossetia-Georgia armed clashes and, at the age of 52, he was won himself a name as a freedom fighter. 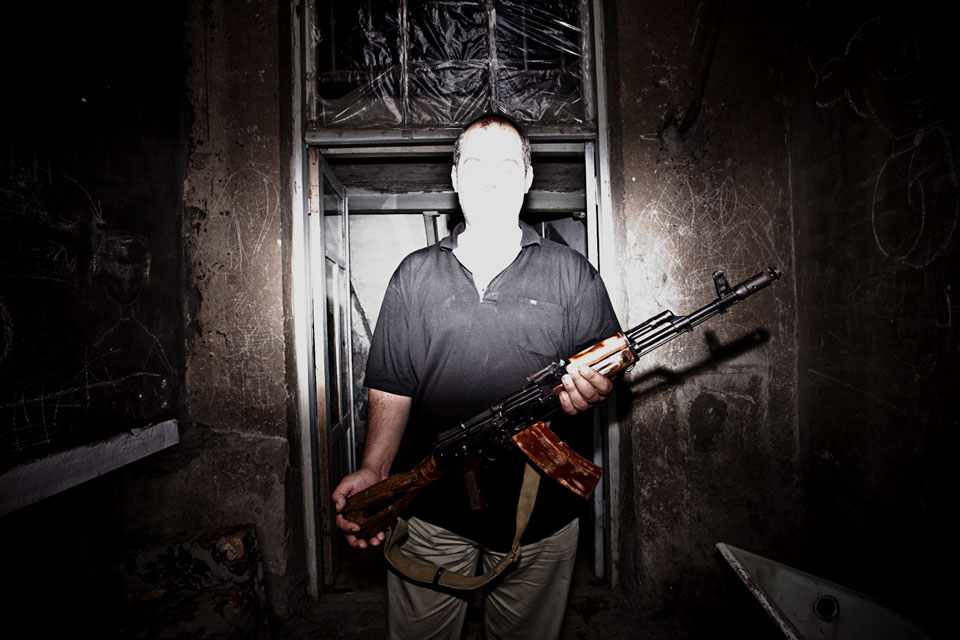 South Ossetia, 2009. I., a painter, is the only one in his family left to take care of his grandmother. He keeps a Kalashnikov rifle carefully hidden from her at home. 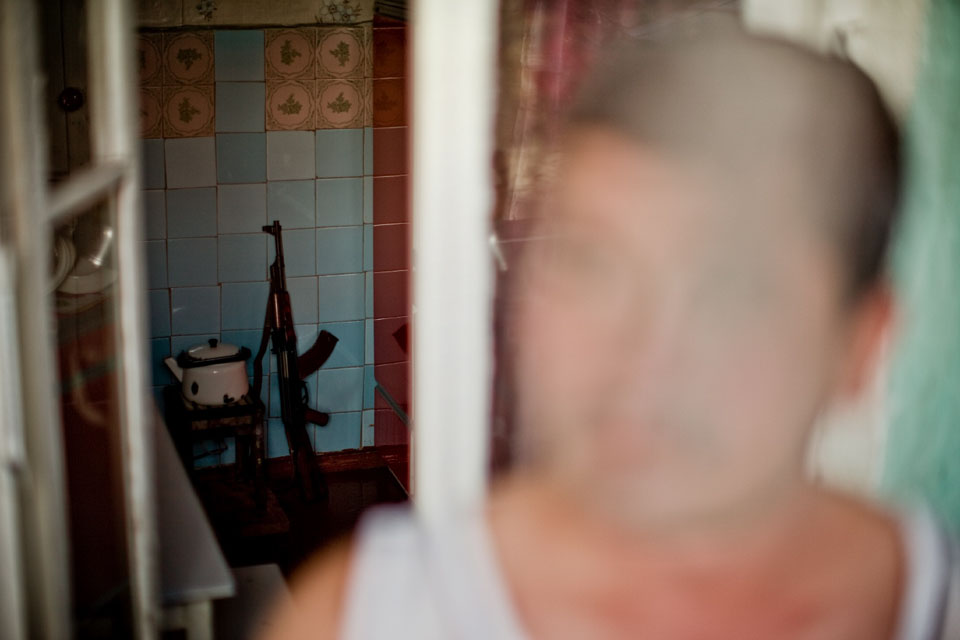 South Ossetia, 2009. R., in his early 40s, has participated in all the South Ossetian wars. he says he is fortunate enough to have a loving family and a big house, even though he keeps a basement full of arsenal. R. says he prays that he will never have to use the weapons. 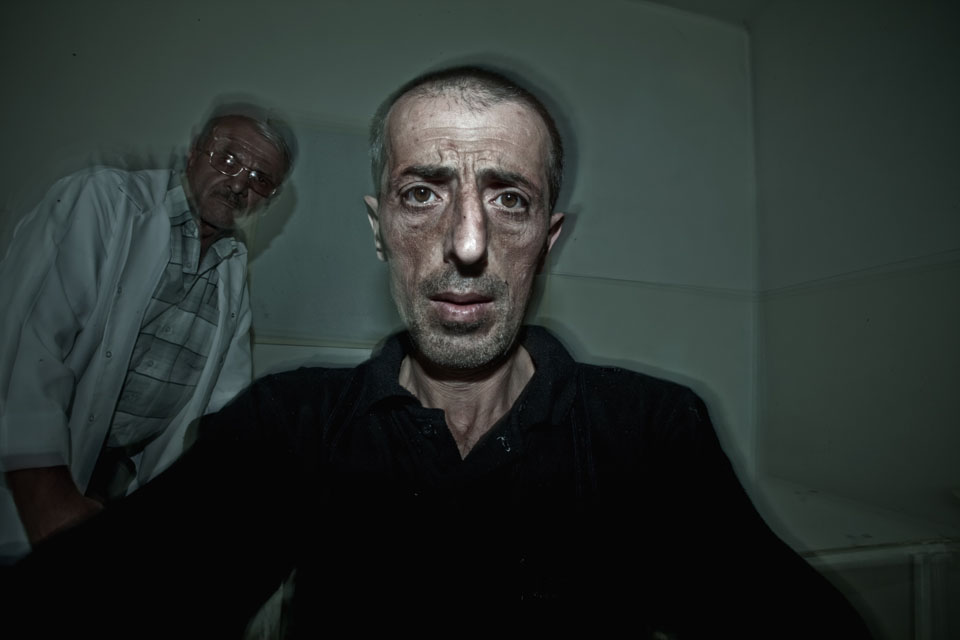 In 2010, Mirzoyan gave cameras to former soldiers residing in the Karabakh mental institution who had suffered mental breakdowns during or after the war. His objective was, through portraits taken by themselves, to show the isolation, confusion, anger, and fear still present in their faces.