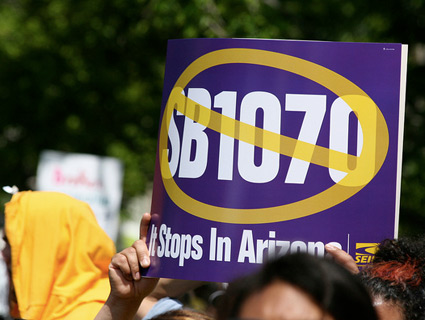 Even before Solicitor General Donald B. Verrilli Jr. opened his mouth to argue that Arizona’s harsh anti-illegal immigration law should be struck down as unconstitutional, Chief Justice John Roberts laid down a bright red line.

“I just want to make clear what this law is not about,” Roberts said. “No part of your argument has to do with racial or ethnic profiling, does it?”

That preemptive strike on critics of Arizona’s SB 1070 set the tone for today’s Supreme Court arguments over whether or not four parts of the law are unconstitutional. One of the Democratic appointees to the court, Justice Elena Kagan, has recused herself from the case. So even if the remaining Democratic appointees join with one of the court’s conservatives to vote to strike down the law, the result will merely be a 4-4 tie that won’t result in an opinion. It’s possible some parts of the law will survive but not others. That result seems optimistic, however, because today’s oral arguments sounded like they could have been broadcast by Fox News.

Although most of the justices took pains to avoid discussing the law’s actual impact on the population it targets, they were comfortable describing that population in the most unflattering terms possible. The justices—including Justice Sonia Sotomayor, the court’s first Latina—frequently referred to unauthorized immigrants as “illegal aliens” or an “illegal person.” Justice Antonin Scalia defended Arizona’s right to “defend its borders,” echoing the rhetoric of the law’s champion, now-deposed Arizona state Sen. Russell Pearce, who refers to illegal immigration as “an invasion.” Going even further, Scalia offered an analogy in which he compared unauthorized immigrants to armed thieves, suggested that the Obama administration’s prioritizing of undocumented immigrants who have committed crimes was like saying “we may only want to go after the professional bank robbers.”

Nor was Scalia pleased when Verrilli pointed out that Arizona’s Latino population was implicitly targeted by the law. “Sounds like racial profiling to me,” he grumbled, before crying out, “Are you objecting to harassing the people who have no business being here? Surely you’re not concerned about harassing them.” That American citizens of Latino descent in Arizona might be subject to harassment was irrelevant to Scalia. The government did not claim in its brief that the Arizona law would result in racial discrimination, but Scalia made it clear that he would not care if it did. The law explicitly forbids racial profiling, but it possesses no supernatural power to erase from the minds of authorities their conception of what a stereotypical unauthorized immigrant looks like.

Former Solicitor General Paul Clement, who distinguished himself arguing on behalf of Obamacare opponents in March, was there for a rematch of sorts with Verrilli. Clement argued that the Arizona law didn’t preempt federal law but rather enhanced or complemented it, an argument the justices seemed receptive to. He also subtly accused the Obama administration of hypocrisy, saying, “The federal government doesn’t like this law, but they’re very proud of their Secure Communities program.” It was remarkable that Clement was the only one in the court today who alluded to the incredible amount resources the Obama administration has deployed to stop illegal immigration, often to the frustration of immigration reform activists.

When Verrilli argued that allowing police to question the immigration status of those arrested would not conflict with federal law if done on an individual rather than a systemic basis, Justice Sotomayor offered him a little advice: “You can see [that’s] not selling very well…Why don’t you come up with something else?”

Verrilli tried to point out that making it an Arizona state crime to be without federal registration papers would impact individuals without legal residency whom the federal government doesn’t want to deport—such as undocumented women fleeing abusive partners who may be eligible for legal status. He pointed out that the part of the Arizona law that criminalizes undocumented immigrants who seek employment were acting in a manner “we would expect law abiding people to do, which is feed their families.” It was the only moment during the oral arguments in which unauthorized immigrants were discussed as anything other than criminals.

As with the health care arguments, the exchanges often went past the legal conflict over state and federal authority and into the realm of politics. And here, as ever, the conservative justices on the court showed signs of living in a Fox News cocoon. The facts on the ground—that the federal government has deported more than a million unauthorized immigrants in the past three years and net migration from Mexico has reached zero and possibly even reversed—didn’t seem to matter.

The chief justice himself offered a dispatch from a conservative alternate universe where a giant statue of Obama stands astride the US-Mexico border like the Colossus of Rhodes, wearing a sombrero and bearing a giant neon sign that reads “¡Bienvenido!” “It sounds to me,” Roberts sniffed, “like the federal government just doesn’t want to know who’s here illegally or not.”