Quirk Books’ collection of ready-to-frame Presidential Campaign Posters from the Library of Congress traces political propaganda—official and otherwise—from the early days of the republic to the modern era. Brooke Gladstone, host of NPR’s On the Media, writes in the book’s preface that “we see in black-and-white and color that the incivility that modern Americans decry as symptomatic of a sick political system has, in fact, been with us always.” Sure enough, before George W. Bush adopted a cowboy twang, Ulysses S. Grant described himself as “the Galena Tanner.” Before a multi-hued Barack Obama looked hopefully skyward, there was Bobby Kennedy grinning in psychedelically vivid colors. And before Mitt Romney’s square-jawed grin, there was…George Romney’s square-jawed grin. In American politics, Gladstone writes, “every generation renews the battle and fights it again”—sometimes literally. 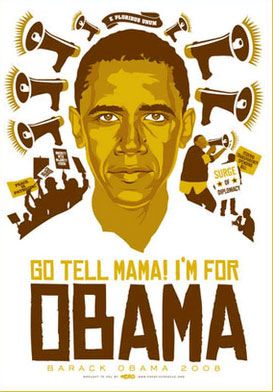 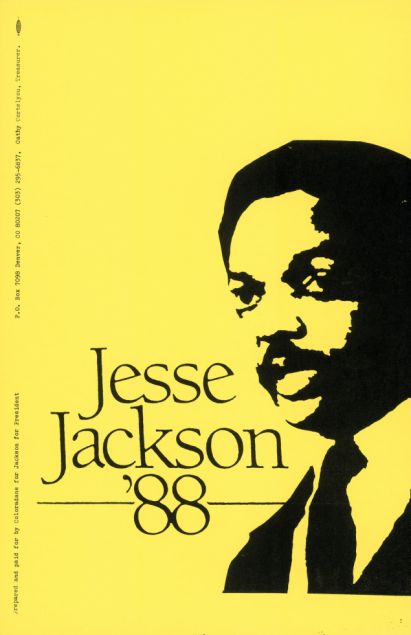 In his 1988 bid for the Democratic nomination, Jesse Jackson focused on those who had lost out under Reaganomics and appealed to the famous “Rainbow Coalition” of marginalized groups. He didn’t win, of course, but he surprised many observers with an unexpectedly strong showing. This stylish yellow-and-black poster wasn’t half bad, either. Quirk Books 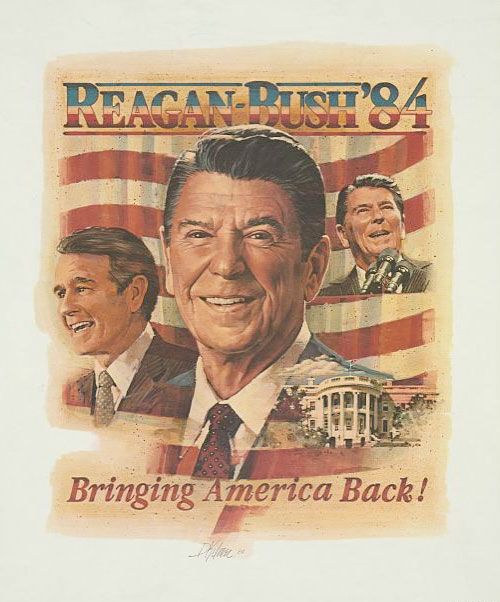 Ronald Reagan’s 1984 reelection campaign portrayed the elderly president as a warm and comforting presence; the cozy glow of this poster reflects his optimistic “morning in America” theme. Quirk Books 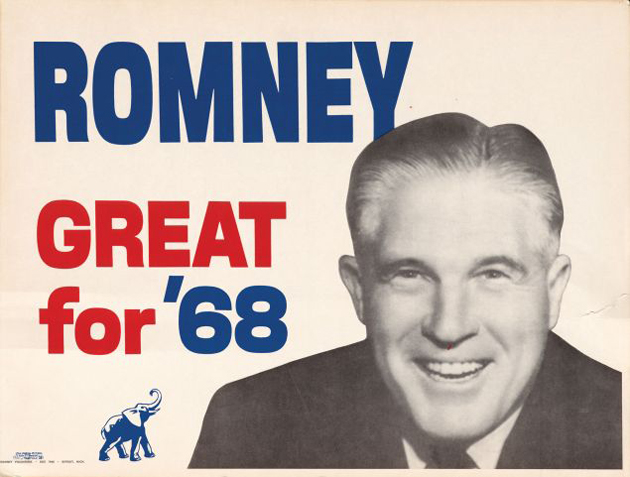 Look familiar? Mitt’s father, three-time Michigan governor George Romney, launched a short-lived bid for the presidency in 1968, while Mitt was serving as a Mormon missionary in France. Ohio Governor Jim Rhodes said that “watching George Romney run for the presidency was like watching a duck try to make love to a football.” Quirk Books 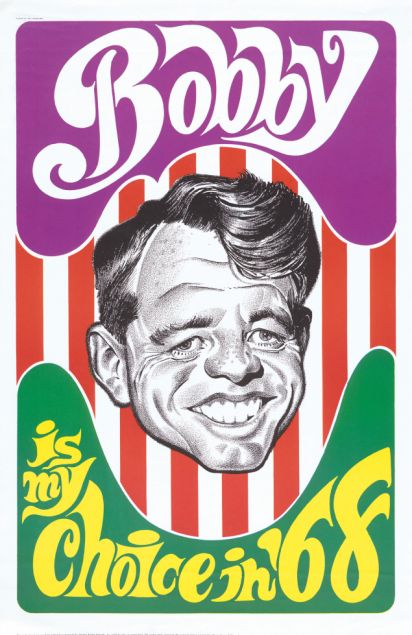 Bobby Kennedy’s psychedelic 1968 poster sought to give the privileged son of a political dynasty a groovier image among young voters disillusioned with politics-as-usual. Quirk Books 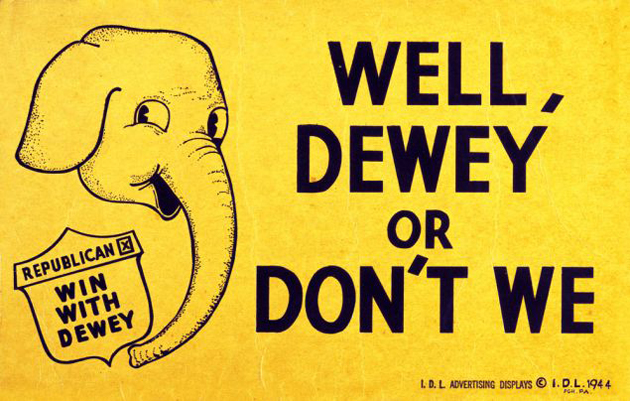 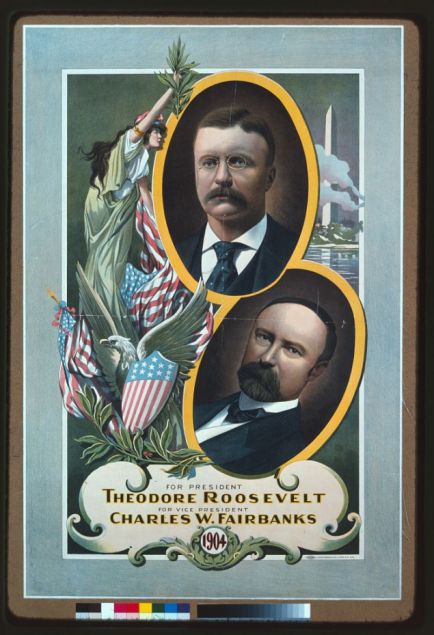 In 1904, Republican President Teddy Roosevelt (namesake of the Teddy bear), who had ascended to office from the vice-presidency after McKinley’s 1901 assassination, clobbered Democrat Alton Parker and Socialist Eugene Debs to win a second term. Quirk Books 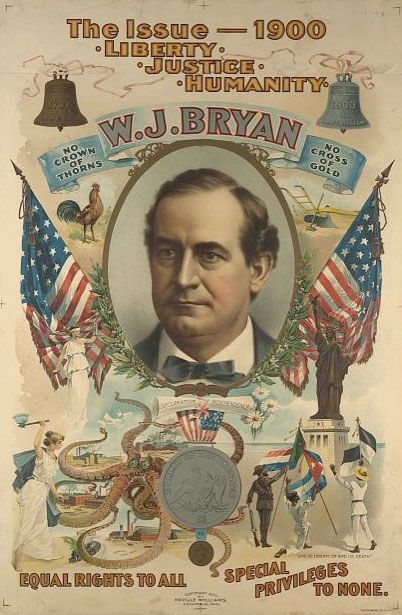 The populist Democratic candidate William Jennings Bryan, who challenged President McKinley in 1900, favored the silver standard, the preferred choice of agricultural interests in the agrarian West and South. Although the gold-silver issue was largely moot by this time, Bryan’s campaign posters featured a silver dollar, declaring, “No crown of thorns/No cross of gold.” Quirk Books 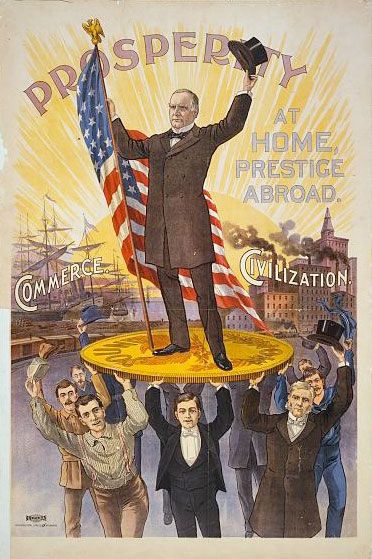 The 1896 presidential election represented a shift in focus from the aftermath of the Civil War to the state of the national economy. In this poster, Republican William McKinley stands on a gold coin, representing his support for the gold standard—a policy favored by urbanized Easterners, industrialists, and creditors. Quirk Books 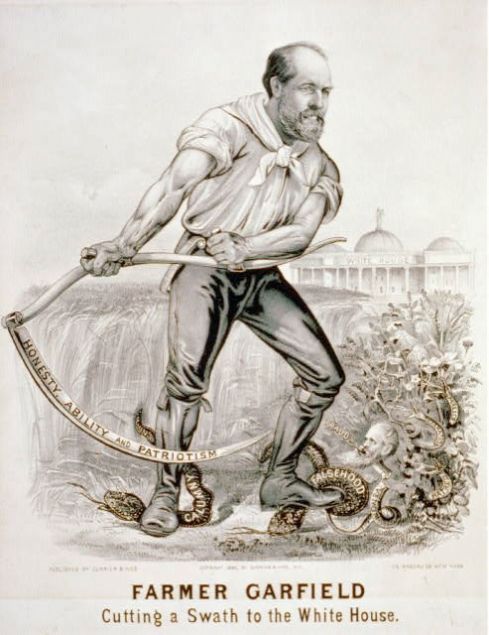 Though James Garfield was a lifelong politician, his 1880 campaign emphasized his humble roots—he was the last elected president who could legitimately claim being born in a log cabin—and working-class past. Here’s Garfield “cutting through the dishonest chaff of his opponents on his way to 1600 Pennsylvania Avenue.” Quirk Books 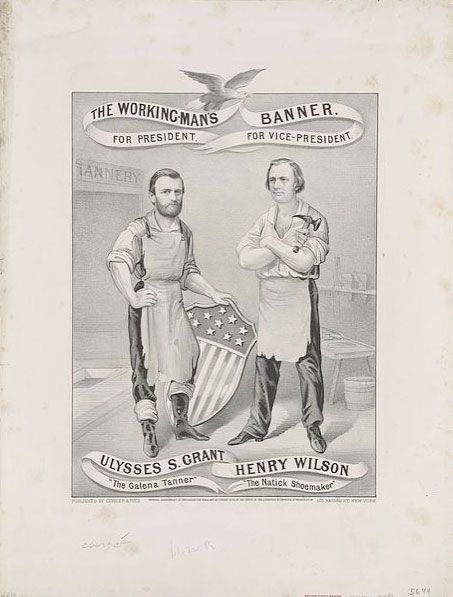 Ulysses S. Grant and his running mate, Massachusetts senator Henry Wilson, sought to appeal to the “common man” in 1872 with this reelection poster depicting them as regular working stiffs—even though the ticket was backed by the likes of Cornelius Vanderbilt and John Astor. Quirk Books 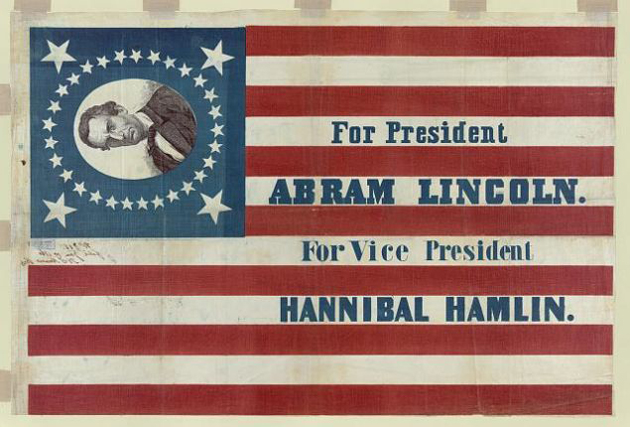 After winning the 1860 Republican nomination in the wake of his impressive debate performances against Democrat Stephen Douglas, Lincoln clarified in a letter to a party official that his name was indeed spelled “Abraham.” This poster maker got it wrong. 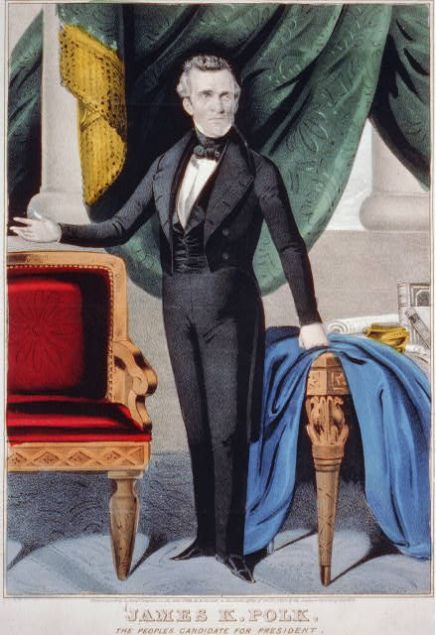 In 1844, the proposed annexation of Texas, which promised to lead to war with Mexico, was the hot issue. Whig candidate Henry Clay annoyed voters by waffling on the issue, opening the door for dark-horse candidate James Polk, who beat out presumed Democratic nominee Martin Van Buren and ultimately Clay to become America’s 11th president. Quirk Books