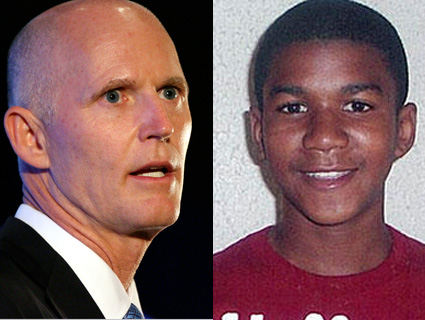 This story has been updated. Click here for the latest.

Somewhere in there, the governor addressed Trayvon Martin’s killing.

Read the latest updates and a full explainer on Trayvon Martin’s killing.

As the public furor grows over Martin’s shooting and the fate of his killer, Scott—one of the nation’s least popular governors, and host of the Republican presidential convention this summer—seems to be struggling with how to respond to the case. It’s not that he’s done nothing. Last Monday, about the same time the Justice Department expressed its interest in Trayvon’s case, he sent a one-paragraph letter to the Florida Department of Law Enforcement (the state’s FBI) directing the agency to investigate. He met with a group of protesters on Tuesday—though he didn’t accede to their wishes to set up a task force on racial profiling.

In Scott’s most substantive moves, he appointed a new special prosecutor to the case after meeting with Martin’s family, and he’s agreed to set up a task force that will investigate the state’s expansive “stand your ground” self-defense law. But Scott’s chosen prosecutor has been attacked by a respected law school dean as having “no enthusiasm for defending citizens,” and the task force will be led by his lieutenant governor, with its members picked by Bondi and four top state legislators—all of them pro-gun Republicans. Scott signaled that the task force would tread carefully on Second Amendment ground, saying in a statement that it would “investigate how to make sure a tragedy such as this does not occur in the future, while at the same time, protecting the fundamental rights of all of our citizens—especially the right to feel protected and safe in our state.”

As a result of these moves and his other recent legislative priorities, it’s been difficult to gauge just how much interest the governor takes in Trayvon’s case. But since taking office 14 months ago, he’s made serious missteps before when attempting to engage Florida’s minorities; they reacted harshly to his gutting of public schools and social services, his drive for prison privatization and voting-rights restrictions, and his push to drug-test welfare recipients at their expense. He’s also been criticized for passing over minorities in his Cabinet and judicial appointments. In December, he tried to connect with a group of black student protesters by mentioning that he’d once lived in public housing. (“We’re not poor!” one of them shouted back.)

Thus far, his reaction to Martin’s death has done little to stem the old criticisms. “If I were governor, I would be out front saying…we’re going to be very aggressive about holding the FDLE accountable for reviewing the Sanford Police Department,” Alex Sink—the Democratic gubernatorial candidate who lost to Scott in 2010—told a St. Petersburg crowd this week. “You wouldn’t be getting some made-up statement from the press shop of the governor.” She added: “In my opinion, if this had been a black man with a gun shooting a young, 17-year-old white boy, there’s no doubt that the shooter would be in jail today.”

That may be political hay from a once-and-future state candidate, but Sink is not the only one suggesting that Scott’s lacking in sensitivity where minorities are concerned. Last year, when Scott demurred about his lack of black judicial appointees (and said he “took a risk” on his black lieutenant governor, Jennifer Carroll), Sen. Arthenia Joyner (D-Tampa) knocked his administration for “monolithic thinking,” adding, “there’s no room for a diversity of thought.” At another dinner with black leaders where he recycled his public housing line, black lawmakers again grumbled. “He assumed that everyone (in the room) was poor and that can only be because you’re black,” Betty Reid (D-Tampa) said.

Curious to see how the governor fields questions about the Martin case in real time? He’ll appear on CNN’s State of the Union Sunday.

UPDATE: In Scott’s appearance on CNN Sunday, he tried to reassure Floridians that he’s a friend of the gun owner, and of the blacks. The money quote:

You want to make sure that everyone feels comfortable with public safety in our state. And so as you know, I’ve put together a task force led by my lieutenant governor, us who, uh, who’s, uh, African American. And you know, I’m gonna have different elected officials appoint individuals, but we’ll look at all of it.