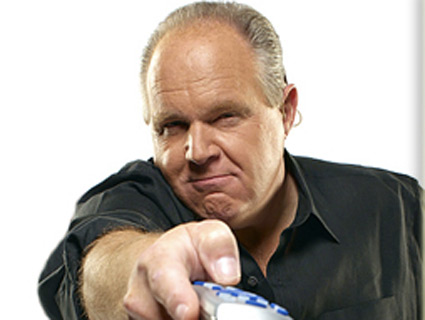 Did someone once call Rush Limbaugh an idiot? Whether or not that was a fair criticism, it’s clear that the recently besieged, over-the-top radio talker lacks certain reading comprehension skills.

On his Wednesday show—and for the second time this week—he assailed my new book, Showdown: The Inside Story of How Obama Fought Back Against Boehner, Cantor, and the Tea Party, a behind-the-scenes, narrative account of decision-making within the White House following the disastrous (for Democrats) 2010 midterm elections. And, once again, Limbaugh got it wrong.

His obsession remains a Washington Post article that details the collapse of the Grand Bargain deficit-reduction deal President Barack Obama attempted to strike with House Speaker John Boehner last summer. The Post article, in Limbaugh’s feverish reading, fingers Obama as the culprit—and Limbaugh has been braying about this for days, insisting that the president killed those talks and Boehner was a stand-up guy. As Showdown notes (pp. 322-327), Obama did try to change the contours of the deal after Senate Republicans announced support for a debt package that included more revenues than Boehner and Obama were discussing. But Obama at that juncture offered Boehner the choice to ease up on entitlement cuts rather than add more revenues. And that was when Boehner bolted.

But that’s not what’s at dispute here. Limbaugh, referring to the book and my appearance today on MSNBC’s Morning Joe, asserts—j’accuse!—that my version of events is completely at odds with the Post‘s account. He pounces on my exchange with Willie Geist when he asked me if Obama and Boehner were truly close to an agreement before the “third wheel”—that is, the tea party Republicans in the House—derailed the accord.

Indeed, they were, I replied, and recounted the story reported in the book (pp. 309-312) about moderate House Republicans coming to Boehner’s office to warn him that House Majority Leader Eric Cantor was telling House GOPers that Boehner had gone RINO—Republican in Name Only—in his dealings with Obama. These moderate Republicans, allies of Boehner, feared that Cantor was preparing to lead (or reap the benefits of) a House GOP mutiny. Get out, they counseled the speaker. Consequently, Boehner skedaddled, the talks undone by his fear of a tea party rebellion.

Not so, says Limbaugh, waving the Post article: the “Washington Post doesn’t say anything like this.” But Limbaugh misses one essential point. The Grand Bargain talks broke down twice. The account I related in response to Geist’s question referred to the first time the negotiations fell apart. The Washington Post piece covers (in great detail) the second time the talks disintegrated, about two weeks later.

Limbaugh doesn’t seem to understand this. (It’s spelled out clearly in Showdown.) Instead, he conjures up conspiratorial notions involving a clash between “far left” media outfits (me versus the Post). He rants:

Now we have two versions of the same story that are at big variance with one another. We don’t pretend to know what it all means yet. But one thing that is happening is that there’s discord on the left over this whole thing, and for some reason a lot of people think that what happened in that debt deal last summer could come back to really bite Obama on his reelection. That has us scratching our head too.

But he apparently didn’t scratch for for too long, because he’s sure that he’s grasped the bottom line: “They’re trying to cover up what is apparent to all, and that is [Obama’s] incompetence.”

Being misread (and misconstrued) by Limbaugh is hardly akin to being called a slut, but this episode shows the guy can’t keep a simple story straight. When he says he can’t “pretend to know what it all means,” that, apparently, is literally true.