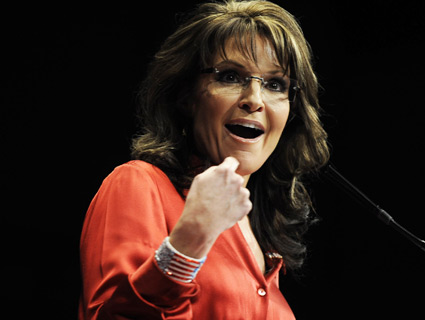 It may be tough for Sarah Palin to know who her true friends are—especially when journalists go to great lengths to ingratiate themselves with her. The latest batch of Palin’s gubernatorial emails—released by the state of Alaska last week in response to an open-records request first filed by Mother Jones—contains correspondence showing how right-wing reporters have tried to curry favor with Palin in order to gain access to the glam queen of conservatism.

For instance, the Washington Times, according to a January 12, 2009, email Palin received from Bill McAllister, her press secretary, tried to convince Palin to do an online chat by promising she could “control the chat by answering or not answering the questions that you choose to address.” And McAllister noted, “As the Washington Times guy said, maybe the thing to do is concentrate on friendly media and just ignore the others.”

Palin wrote: “What did they do??? Dear God-did I just get majorly used again????? And are we being exploited? And did they take things out of context?”

The American Spectator, another conservative publication, took things to another level. In a January 13, 2009, email, Thomas Cheplick, who has been a writer for the magazine and a “freelance reporter” for the conservative Heartland Institute, asked to interview Palin and poured it on thick. He boasted that he had written a piece in early 2008 boosting the then little-known Alaska governor as the perfect choice to be John McCain’s running mate, claiming this article was credited for “launching” Palin. And he explained how he had further helped her become the GOP’s vice-presidential nominee:

You should know that I ensured that [the article] found its way to Rush Limbaugh’s desk—who read it out loud on the air and put up a pro-Palin webpage on rushlimbaugh.com that directly linked to it, and as well as I gave it to McCain’s chief strategist Charlie Black. All this back in February 2008. (Indeed, you’ll have a hard time finding any other articles advocating for her to be chosen as veep that were not linked to me…)

And Cheplick, according to Cheplick, did so much more:

I know you have the best interests of the Governor at heart (as—believe it or not—I do too), but having worked for [former Reagan aide] Lyn Nofziger, I seriously do believe you are making a huge strategic communications mistake in limiting her from the national media and magazines like the Spectator. Perhaps, Gov. Palin does not want to run again for national office, which is fine, but if she has the fire in the belly to do it again—well, I would stress to you that very soon getting the Governor out there nationally on the “rubber-chicken” circuit is crucial. Remember, Barack Obama’s first visit to New Hampshire was May 2005.

BUT you cannot put her out there on the “rubber-chicken” circuit nation-wide, without her having—like Reagan and Obama—”The Speech”. AND that’s why I want to interview her for a story for the American Spectator.

Cheplick even suggested he would time the article’s release to Palin’s advantage, adding,

[I]t’s crucial in my view that this story gets written about her, and really somewhat soon. The mainstream media, the Left, and elite Americans are succeeding—whether you want to believe it or not—in slowly convincing the American public writ large that Gov. Palin is just like Dan Quayle: “a stupid hillbilly.” That’s a hard and dangerous impression to dislodge once its cemented in the public mind. The theme, instead, that she is not “a stupid hillbilly Governor”, but indeed “a rugged individual with more battle-scars than Caroline Kennedy, a Governor brimming with original and fresh ideas” or something like that, needs to be cemented. This—again—is what I want to do in the story…There are a lot of subtle things I intend to put into this serious piece—that will be widely-circulated, and it will have a profoundly positive effect for her—however, the main theme that I will be returning to over and over will be her rugged individualism, and how she embodies a modern-style of conservatism that is also down-to-earth; how she is how brimming with new conservative policy ideas, which I know she is.

It seems the eager Cheplick was not sufficiently persuasive. He did write a piece for the American Spectator reporting that Palin was just too dang busy with her gubernatorial tasks in Alaska to become involved with conservative movement politics in Washington. (“[A]t the moment she is simply plain loaded with work,” Cheplick wrote.) The article contained no quotes from Palin, but McAllister did talk to Cheplick on the record for the piece.

Palin’s aides, unsurprisingly, seemed interested in mainly setting her up with sympathetic reporters. In December 2008, Human Events, a conservative publication, informed Palin’s office that it intended to name her the “Conservative of the Year,” and John Gizzi, its main Washington correspondent, requested a brief interview with Palin. In processing this request, McAllister sent Palin and another aide an email noting, “As you may recall John Gizzi interviewed the Governor back in March and he featured her in the paper as his first pick for VP. The article was a homerun. Gizzi will only write favorably about the Governor.” Palin’s office helped Gizzi by supplying written answers to questions he provided. (Asked about McAllister’s note, Gizzi said, “Well, that is her [sic] conclusion and not my words. But it’s a fair assumption: if you’re going to make someone “Conservative of the Year,” I guess it is safe to say you will write favorably.”)*[See correction below.]

After McCain put her on his ticket, Palin sent an email to family members urging, “Please, no one may talk to reporters. It’s a very ugly situation…”

Yet cooperating with conservative journalists could backfire. In January 2009, Palin granted conservative filmmaker John Ziegler an interview for an upcoming documentary. Days later, Ziegler posted excerpts on YouTube in which Palin suggested that if Caroline Kennedy ran for Senate in New York she would receive better media treatment than Palin did due to Kennedy’s elevated social class. In that interview, Palin also accused Katie Couric and Tina Fey of “capitalizing” on and “exploiting” her. Her tinged-with-bitterness remarks were reported in Politico and elsewhere.

After the Politico story appeared, Palin was enraged with Ziegler and his team. She emailed her aides, “What did they do??? Dear God-did I just get majorly used again????? And are we being exploited? And did they take things out of context?” In another email, she told her aides, “remember they PROMISED the wouldn’t take things out of context to make it sound like I was whining or self-centered in this. Unflippinbelievable.” And in a third email, she complained: “Are they SELLING excerpts from the interview? They are snakes for doing this. I trust NO ONE in the media – never again – and I do not want to be a part of this docu anymore. They need to edit me out…”

Bill-what did they tell you before this was agreed upon? You told me they were promising it’d be fair, it was a real docu…that it was the opportunity to help [with] credibility in the media and to set the record straight without sounding whiny…what did they tell you about leaking this stuff for their own gain???

McAllister emailed back: “Nothing, obviously, or I would have objected.”

Two years later, Ziegler would describe his relationship with Palin as a long-running love-hate mishmash, claiming that Palin told him posting those YouTube clips had been no biggie. After that episode, Ziegler did go on to cooperate with Palin on other fronts. But he eventually criticized her for developing a “bunker mentality” that froze out one of her most prominent and loyal defenders (him), and he portrayed her as erratic and not supportive of her allies (meaning, him). Ziegler ended up urging Palin not to run for president in 2012.

Palin was always worried about journalists gunning for her. After McCain put her on his ticket, she sent an email headed “Reporters” to family members urging, “Please, no one may talk to reporters. It’s a very ugly situation where they’re looking for any ‘odd’ comments to lead to the destruction of the McCain ticket. Please don’t talk to them or provide photos. The campaign does that, we don’t. Especially here in Minesota we can’t have ANYONE talking to the press. McCain’s people keep remind me that over and over.”

She also was not keen on media reports that sought to penetrate her inner circle. In a March 30, 2009, email to an aide, Palin responded to a Politico article on her purported political crew that reported that John Coale, a prominent personal-injury lawyer and major Democratic donor married to Fox News host Greta Van Susteren, had become a Palin confidant. The piece noted that Coale said that he and Palin “email back and forth about once a week.” Palin apparently thought Coale was hyping his influence with her. “Argh!!!,” she wrote. “I can’t believe Coale says we email once a week! And others cited in here whom I have not even met! And I could go on…” But she didn’t.

Shortly before that, Palin had another visceral reaction to a Washington Post article that reported on her post-2008-campaign return to Alaska and noted that she had experienced a “bumpy homecoming.” She emailed a copy of the article to her husband Todd and commented,

Would you pray for our strength. And for God to totally turn things around…Enough is enough. May we see victories and feel His hand of mercy and grace.

Todd Palin replied: “I did.”

Correction: This story was wrong to say that Palin responded to Gizzi with written answers. Gizzi notes that Palin granted him a 15-minute phone interview, rather than a written reply. We regret the error. Gizzi also says, “I never provided her with questions.” But an email to Palin from the aide who arranged the interview did state, “His questions will be easy,” and it listed three questions: “1. How is she feeling now that the campaign is over? 2. What is the next step for her? 3. What does she believe are the defining issues for being a conservative?”