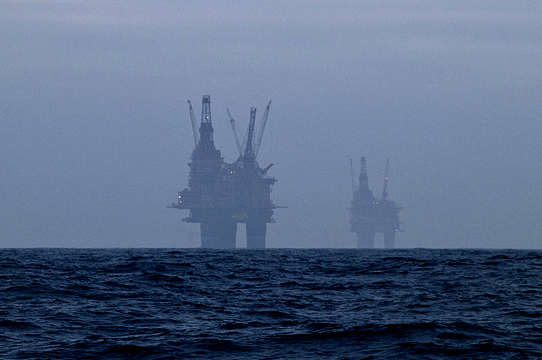 A natural gas well in the North Sea 150 miles off Aberdeen, Scotland, sprung a massive methane leak on March 25. The 238 workers were all safely evacuated. But the situation is so explosive that an exclusion zone for ships and aircraft has been set up around the rig, reports the Mail Online. And nearby rigs have been evacuated, reports the New York Times:

Royal Dutch Shell said it closed its Shearwater field, about four miles away, withdrawing 52 of the 90 workers there; it also suspended work and evacuated 68 workers from a drilling rig working nearby, the Hans Deul.

But that’s not the worst of it. The platform lies less than 100 yards/meters from a flare that workers left burning as crew evacuated. The French super-major oil company owner of the rig, Total, dismissed the risk, while the British government claimed the flame needs to burn to prevent gas pressure from building up. But Reuters reports:

[O]ne energy industry consultant said Elgin could become “an explosion waiting to happen” if the oil major did not rapidly stop the leak which is above the water at the wellhead. 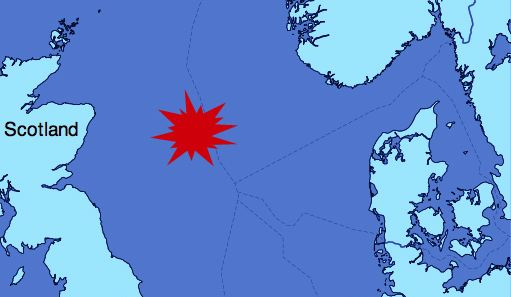 Elgin Field: Adapted from map by NordNordWest via Wikimedia Commons.And that may not be the worst of it either. The leak is not in the well apparently but in the chalky seabed around it. No one really knows how reparable that will be—especially with the risk of explosion so high for any workers on site.

Plus, the field produces sour gas: a potent mix of natural gas, hydrogen sulfide, and carbon dioxide. Twenty years ago the cost of extracting energy from such messy stuff would have been prohibitively expensive. Now, not so much. But the true cost could be brutal, reports the BBC :

The major threat to the local ecosystem is the hydrogen sulphide, which is toxic to virtually all animal life. “You might as well put Agent Orange in the ocean,” says [Simon Boxall of the National Oceanography Centre in Southampton, UK]. Because the leak is below the water’s surface, the hydrogen sulphide is bubbling through the sea water. This is the worst-case scenario, says Boxall, because it could lead to mass animal and plant deaths. Boxall says Total needs to monitor the water quality to see if this is happening.