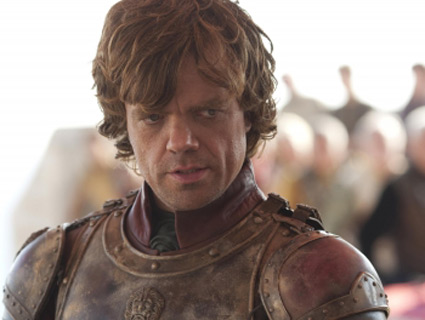 Peter Dinklage as Tyrion Lannister in HBO's Game of Thrones.HBO

When the second season of Game of Thrones, the fantasy series based on George R.R. Martin’s bestselling books, premieres this Sunday on HBO, it will do so without first-season protagonist Ned Stark. That’s because (spoiler alert) Stark was publicly beheaded at the whim of tween megalomaniac King Joffrey Lannister at the end of last season.

Shortly after being appointed to replace Stark as Hand of the King, sort of a prime minister with dictatorial powers, Tyrion Lannister, played by the fantastic Peter Dinklage, explains to Varys, the kingdom of Westeros’ spymaster, why he won’t also lose his head.

“I’m not Ned Stark. I understand how this game is played,” Tyrion says.

“Ned Stark is a man of honor,” Varys replies with feigned shock.

“And I am not, threaten me again and I’ll have you thrown into the sea.”

The second season of Game of Thrones is an ensemble show, but it does not, strictly speaking, lack a protagonist. Although technically based on A Clash of Kings, the second book in George R.R. Martin’s fantasy series, through which the absence of Ned Stark loomed like a shadow over the entire narrative, the second season has embraced Tyrion as its main character, and all the better for it. We see Tyrion succeed everywhere Stark failed, carefully identifying and uprooting spies for his sister, the devious Queen Cersei, manipulating his rivals on Westeros’ governing body, the small council, and trying desperately to mitigate the consequences of his nephew King Joffrey’s sociopathic tendencies.

That we have shifted from identifying with the patriarch of the Stark family to the black sheep of their sworn enemies, the Lannisters, is more than in keeping with Martin’s themes of moral ambiguity and conflicting motivations. It’s one of several areas in the series where the shift from the written word to the small screen actually improves on the original story. It helps that Tyrion is no less devoted to his family than Stark—it simply happens that his family is full of moral monsters. Sean Bean’s Ned Stark was the archetypical fantasy protagonist: Strong, loyal to a fault, capable in combat. Tyrion, a dwarf, requires the constant protection of his sarcastic and capable sellsword Bronn and has only a utilitarian commitment to social mores. Yet it becomes immediately apparent that he is more suited to running a kingdom than Ned Stark could ever have hoped to be.

Still, Tyrion has his work cut out for him, what with nobles all over Westeros looking to overthrow his deranged nephew. The events of season one, particularly Joffrey’s capricious execution of Ned Stark, have thrown Westeros into chaos. Stark’s son Robb has declared himself the King in the North, and is proving to be unbeatable in battle. The older and younger brothers of the late King Robert Baratheon are at each other’s throats, each having raised armies seeking to depose Joffrey. Although we last saw Renly Baratheon trying to convince Ned Stark to throw Cersei in prison, he now declares himself the true heir to the Iron Throne. That doesn’t please Renly’s older brother Stannis, who is in thrall to a religious fanatic named Melisandre who may or may not have magic powers. Robb’s childhood friend Theon Greyjoy, once essentially a war hostage of House Stark, is sent back to his father in the Iron Islands to forge an alliance and is instead forced to consider whether or not to betray the family that raised him. Stannis has blanketed the entire realm with the revelation that King Joffrey is the fruit of Lannister incest between Cersei and her brother Jamie (now in the hands of the Starks) rather than the true heir to the Iron Throne. Largely forgotten by the would-be kings is Daenerys Targaryen, another potential claimant to the Iron Throne of Westeros, who along with her infant dragons lingers near death in a desert across the Narrow Sea.

While the transition to television typically makes a literary narrative less complex, Game of Thrones manages to use the shift of medium to its advantage. Martin’s books are written from the first-person perspectives of certain characters, but the show sheds that limitation. Robb Stark, a cipher in the novels, becomes an actual character in the show, and as a result we get a glimpse of how the responsibilities of war and the social mores of aristocracy clash with the impulses of adolescence. The political consequences of Renly’s love affair with one of his knights, only hinted at in the novels, become central to the show. When Tyrion attempts to assuage Joffery’s impulse-control problem by buying him time with prostitutes for his birthday, we get to see just how much of a little psycopath the young king actually is. With the brief introductions of Yara Greyjoy (named Asha in the novel) and Brienne of Tarth, this season includes the promise of two women characters who are not prostitutes or noble ladies chafing against the gender constraints of their respective societies, but women who have rejected them entirely.

The first few episodes of the second season of Game of Thrones do retain some of the previous season’s flaws. Sexposition is back, and the influx of new central characters may be disorienting and off-putting for viewers who haven’t read the books. Although Martin also kept much of the sort of violence that might be satisfying (read: retributive) off the page, on the show the absence of big battle scenes comes off as a budgetary problem. The show remains an inappropriate choice for the faint-hearted: The first few episodes include several children being murdered and a meet-cute that takes place while a soldier undergoes a battlefield amputation.

Yet the show retains what was so impressive about the novels, a fantasy world that lacks the moral binaries so common to the genre. Tyrion’s prominence in the first few episodes underscores the moral ambivalence that is the heart of Martin’s novels, forcing the audience to identify strongly with a character whose main commitment is to preserving the power of the first season’s major antagonists. The nobles lack nobility, the knights are there to protect the power of their lords, not the lives of the smallfolk, and magic is a thing of the distant past.

“What boy doesn’t secretly wish for hidden powers to lift him out of his dull life into a special one?” Maester Luwin tells the paraplegic Bran Stark, who is convinced his nightime dreams of being a direwolf are not dreams at all. “Maybe magic once was a mighty force in the world, but not anymore.”