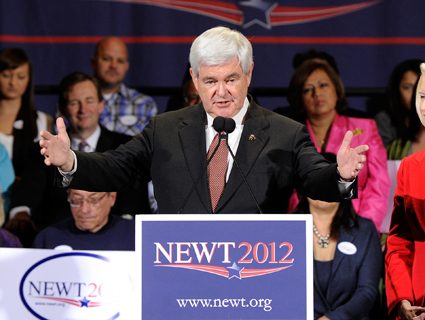 In early February, Newt Gingrich launched a new website attacking GOP front-runner Mitt Romney for his less-than-distinguished record as a hunter. The site, romneyguns.com, mocks the former Massachusetts governor for once claiming to have hunted “small varmints,” and depicts Romney in an Elmer Fudd-style cap holding a rifle, standing inside a silver cup. It’s funny because Romney has been hilariously uncomfortable when he’s asked about hunting. It’s also funny because the man attacking him is Newt Gingrich.

Gingrich, as my colleague Andy Kroll reported in January, has never owned a gun in his life. His comment that “males are biologically driven to go out and hunt giraffes” notwithstanding, he does not hunt. Instead, Gingrich’s passion for wildlife is on the complete other side of the spectrum—he once told a reporter that he’d like to spend 6 to 12 months in the Amazon staring at tree sloths. When it comes to big-game-hunting bona fides, the former speaker gives Romney a run for his money. Newt’s affinity for firing a gun in anger at an animal was captured in this scene from a 1995 Vanity Fair profile:

Carter tells a down-home kind of story from the 1970s. Newt and Carter, who was then his campaign treasurer, used to barbecue hogs in the Gingriches’ driveway in Carrollton, Georgia. They would go to a friend’s farm and pick out a hog –and shoot it.

Carter showed Newt how to use a Walther P-38, a W.W. II German pistol. “I said, ‘Put some corn in your left hand. When the pig comes over to get it, put the pistol against his head and shoot him between his eyes.'”

“So the pig comes over and he starts eating,” says Carter. “Newt flinches as the round hits the pig on the side of the head and ricochets down.” But the shot only stunned the hog and sent it fleeing back into the pen. “Newt keeps trying to get this pig to come back to him. Newt’s getting madder and madder. I said to him, ‘You just shot the son of a bitch in the head, Newt, why do you think he’s gonna come to you?'”

Carter recalls urging his comrade-in-arms, “‘You gotta get in there, in the hogpen, and go get him.’ But Newt wouldn’t do it. So I ended up going in the pen and killing the hog.”