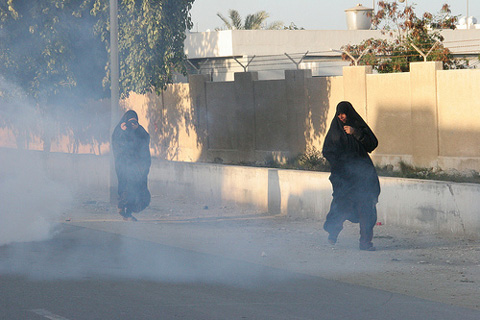 A veteran US law enforcement official recently began advising the Bahraini police, who on Tuesday engaged in another harsh crackdown as protesters took to the streets. John Timoney, fomerly Miami’s police chief, agreed in December to join Bahrain’s effort to reform its police; a brutal government response to protests there last year included fatalities. The tiny Gulf Kingdom also recruited a former top police official from Britain to help with the process. Timoney has since claimed that Bahrain is changing its police tactics for the better. Tuesday’s events cast doubt on that, with protesters once again facing tear gas, stun guns, and armored vehicles aimed at stifling the demonstrations.

The police attempted to prevent protesters from even entering Manama’s Pearl Roundabout, the site of mass protests and brutal police response last year. One protester described the use of tear gas to Reuters: “They fired straight at us, they weren’t even shooting in the air.” Andrew Hammond, a reporter at Reuters and one of the only journalists who covered yesterday’s protests, wrote on Twitter that police “chased everyone down road, firing straight at ppl fleeing.” Some protesters reportedly threw Molotov cocktails and rocks at police, who arrested at least 25 protesters in Manama. More than 100 protesters were injured. In Shia villages, Bahraini police reportedly even entered homes in hopes of finding protesters. Opposition activist Mohamed al-Maskati described the scene to Bloomberg: “They are storming houses suspected of harboring demonstrators, using tear gas, closing roads and arresting people.”

Timoney’s record in America doesn’t exactly instill high hopes for his leading reform. In 2003, during Timoney’s tenure in Miami, protesters demonstrated against a Free Trade Area of the Americas meeting. More than 200 people were arrested; according to the Miami New Times, police used “rubber bullets, shields, batons, concussion grenades, and stun guns” to quell demonstrations. A St. Petersburg Times editorial writer said that the show of force that day in Miami “would have made a Latin American dictator blush.” John De Leon, who leads the ACLU of Greater Miami, told The National earlier this week that the police response to the 2003 demonstrations “was the most overarching use of force I have seen in my lifetime.”  Timoney went so far as to blame the tear gas on the protesters, apparently suggesting that they had launched it: “We all got gassed. They were loaded to the hilt. A lot of missiles, bottles, rocks, tear gas from the radicals.”

Toby Jones, a professor at Rutgers University and an expert on Bahrain, questions whether Timoney would realistically help bring less aggressive tactics to Bahrain’s police force. His aim, Jones suggests, would more likely align with the objective of the security services there: “not to reform, but to contain the opposition in the villages, stamp out protests, and to prevent any kind of widespread national mobilization like that that took place a year ago.”

Timoney did not respond to requests by email and phone for comment.

The United States has suspended a $53-million weapons contract until Bahrain implements reforms recommended by the Bahrain Independent Commission of Inquiry, a commission created to investigate the government’s response to protests in Bahrain. Among other recommendations, its report calls for protesters not to be tried in military courts. It also calls for the families of those who were killed to be given compensation. According to a Foreign Policy report in January, the US is set to give Bahrain an alternative weapons package.