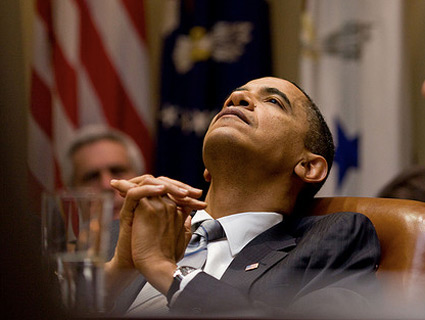 For months, Catholic religious leaders have waged a PR campaign criticizing the Obama administration for allegedly infringing on their religious liberties. They’ve blasted, among other things, an administration requirement (since rescinded) that institutions affiliated with religious organizations offer contraceptive coverage in their health insurance plans. Religious conservatives are also fuming that the administration declined to renew a contract with the US Conference of Catholic Bishops (USCCB) to provide services for human trafficking victims because the group refused to provide referrals for contraception and abortion to sexual assault victims.

Gary Marx, the executive director of Ralph Reed’s Faith and Freedom Coalition, sent out a fundraising letter this month urging people to sign a petition fighting Obama’s “war on religion,” writing: “The Obama Administration’s actions are evidence of a pattern of hostility towards religious institutions and an antipathy to uphold and protect the nation’s most fundamental founding principles.”

Republican members of Congress have joined the chorus, accusing the Obama administration of trampling religious freedoms. On Thursday, Rep. Darrell Issa (R-Calif.), chairman of the House Oversight and Government Reform Committee, will hold a hearing on precisely this topic. Among those testifying will be Rev. William Lori, chairman of the USCCB ad hoc committee on religious liberty, the group leading the charge against Obama’s contraceptive mandate.

But all the outrage about religious freedom has overshadowed a basic truth about the Obama administration: When it comes to religious organizations and their treatment by the federal government, the Obama administration has been extremely generous. Religious groups have benefited handsomely from Obama’s stimulus package, budgets, and other policies. Under Obama, Catholic religious charities alone have received more than $650 million, according to a spokeswoman from the US Department of Health and Human Services, where much of the funding comes from. The USCCB, which has been such a vocal critic of the Obama administration, has seen its share of federal grants from HHS jump from $71.8 million in the last three years of the Bush administration to $81.2 million during the first three years of Obama. In fiscal 2011 alone, the group received a record $31.4 million from the administration it believes is virulently anti-Catholic, according to HHS data.

Far from waging war on religious organizations, Obama has largely left in place the federal faith-based infrastructure created by President George W. Bush. He has also increased the amount of federal dollars flowing to religious groups—much to the chagrin of civil liberties and civil rights groups. They believe the administration is turning a blind eye to ongoing and egregious constitutional violations over church-state separation by religious groups receiving millions in taxpayer dollars.

“Religious organizations have greatly benefited from the Obama administration,” says Amanda Knief, the government relations manager for the Secular Coalition.

During the 2008 campaign, in a speech in Zanesville, Ohio, Obama promised to expand the role of faith-based organizations in delivering federal services. But he added a caveat acknowledging the need for a firewall between evangelizing and serving clients. “If you get a federal grant, you can’t use that grant money to proselytize to the people you help, and you can’t discriminate against them—or against the people you hire—on the basis of their religion,” he said. “Federal dollars that go directly to churches, temples, and mosques can only be used on secular programs.”

Obama’s comments struck a chord with civil libertarians who’d been fighting the Bush administration for years over its policies, which included exempting faith-based groups from compliance with federal anti-discrimination statutes. That meant religious groups with federal contracts could refuse, for instance, to hire gays if their religious beliefs found gays and lesbians an affront to God. And they could do so even if that gay person were seeking secular work on a federal contract to, for instance, help underage kids who’d immigrated illegally to the United States without their parents. The Bush administration also, for the first time, allowed federal money to go directly to churches rather than nonprofit charitable organizations, making the contracts and grants far less transparent and perpetuating the notion that the federal government was illegally subsidizing religion.

“This shift in how we deal with government funding to religious institutions at the federal level underwent dramatic transformation in the Bush administration,” says Frances Kissling, the former president of Catholics for a Free Choice.

If Obama was really bent on waging war on religion, some of these contracts might be the first to go. He hasn’t touched them.

In 2007, the Office of Legal Counsel at the Justice Department issued a memo (PDF) stating that the evangelical Christian group World Vision was still eligible for federal funding from the department, even though it openly discriminated in hiring, which DOJ regulations prohibited contractors from doing. World Vision receives hundreds of millions of dollars in federal grants annually, mostly to do aid work abroad. The OLC memo came the same year that several former employees sued the organization after it fired them simply for adhering to a different version of Christianity than the one espoused by their employer.

World Vision prevailed in the case in the 9th Circuit Court of Appeals, and in 2010, the Supreme Court declined to review the case. That decision essentially meant that religious organizations can legally factor religion into hiring decisions. However, some civil libertarians believe that the law still doesn’t allow religious groups to discriminate when using federal money to deliver public services. In his Zanesville speech, Obama seemed to agree. However, since taking office, he has avoided the issue entirely, and has allowed such things as the Bush-era OLC memo stand.

In 2009, following criticism from progressive religious and civil rights groups demanding a fix to the old Bush faith-based policies, Obama did what all presidents do when they want to punt on an issue: He created an advisory council to make recommendations for fixing faith-based programs. The hiring discrimination issue, however, was specifically left off the table for discussion. Not only that, but Obama stacked the committee with people who represented organizations that were the recipients of millions in federal money and were committed to continuing to make hiring decisions based on religion, including the US Conference of Catholic Bishops and World Vision. The council released a report with some tepid recommendations for reform. Even those, however, have not been implemented by the administration, says Barry Lynn, executive director of Americans United for Separation of Church and State.

Obama has followed in Bush’s footsteps in other ways, too. In 2009, he surprised and dismayed some supporters by putting Alexia Kelley, an anti-abortion Catholic, in charge of the Office of Faith-Based and Neighborhood Partnerships at the HHS, where she oversees the distribution of more than $20 million in grants to religious groups.

That same year, Americans United sent a letter to Attorney General Eric Holder asking for the Justice Department to terminate several contracts with several faith-based groups that were allegedly openly proselytizing to their clients, as well as discriminating in their hiring, in violation of federal law and Justice Department policy. Among the contracts was one to the Detroit Rescue Mission Ministries, which had received nearly $500,000 in federal funds from the Justice Department under a juvenile-justice grant to run a summer camp for at-risk kids that included Bible studies as part of the program.

Nothing came of the protest, and the grants eventually expired. But the Detroit Rescue Mission is still receiving hundreds of thousands of dollars in federal funds annually. On its website, it touts itself as the nation’s largest nonprofit recipient of grants from the Department of Housing and Urban Development.

To apply for a job with the rescue mission, applicants are required to pledge agreement with the group’s statement of faith, to identify one’s church and pastor, and to answer a host of questions about their religious beliefs, including, “What does it mean to you to have Christ as Lord of your life?”

If Obama was really bent on waging war on religion, some of these contracts might be the first to go. He hasn’t touched them.

But if Obama thought that keeping evangelical and Catholic religious organizations flush with federal money would earn him their political support, he’s now discovering that’s just not the case. And not only has he come under fire from right-wing religious groups, he’s alienated the progressive religious groups who might be his natural allies. “Obama hasn’t changed anything,” Lynn says. “We’ve got more money, arguably, with no additional strings attached going to the same groups that often discriminate on the basis of religion in hiring.”