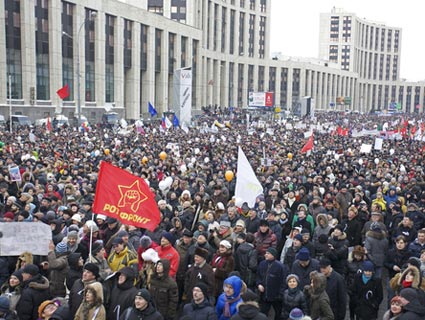 Putin’s grip on Russia: Over the two-plus decades since the Soviet Union dissolved in 1991, Vladimir Putin has been in charge for more than half the time. Currently prime minister, he is running for president—again—in the March 4, 2012 elections. The ex-KGB officer served as the nation’s president from 2000 until 2008. After two four-year terms, Putin then stepped into the role of prime minister, while his former chief of staff, Dmitri Medvedev, took over the presidential gig. Is it totalitarianism redux? Current Russian law mandates that no president may serve more than two terms consecutively; by leaving the presidency without really leaving the top of the Kremlin, it looked like Putin was smoothing his eventual path back to his old seat. He and Medvedev confirmed as much last September, admitting that they’d agreed years ago that Medvedev was to function merely as a “seat-warmer” president.

Meanwhile, former KGB officers—including some of Putin’s former pals in the notorious intelligence agency—have been assigned top Kremlin posts. And Putin has encouraged a number of policies that hearken back to Soviet days: He’s overlooked a culture of corruption and extortion, cracked down on free speech, and has persistently degraded social benefits, especially for the elderly and veterans. Interestingly, Putin’s popularity, and that of his party, United Russia, has since declined dramatically.

What’s happening now? The latest large-scale demonstration is set for Moscow on Saturday, February 4. In anticipation, some pointed anti-government art has been zipping around Russia’s interwebs and beyond. A few examples: a Putin speech dubbed over a Lego video, a Titanic parody, and a lewder version of The Girl With the Dragon Tattoo movie poster. Protesters have also put together a resolution listing their movement’s demands, which include annulment of the December 4, 2011 parliamentary election results, new elections that are free and fair, and the release of imprisoned activists. Some have predicted that protest turnout on February 4 will be lower than it was during December’s massive rally, due to even colder temperatures. According to the protest movement’s Facebook invite, however, more than 27,000 people have pledged to attend. Russian publications are also predicting disunity at Saturday’s rally. With presidential candidates from each of the four other political parties scheduled to speak, the protests are likely to be a sum of divergent groups—nationalists, liberals, and leftists who can agree on being anti-Putin…but not much else.

Why did the protests start? During the December 4 parliamentary elections, a citizen-produced video surfaced online showing pro-Putin election employees filling out scores of extra ballots. The video spread fast, and soon several other amateur clips documenting fraud popped up on YouTube: one showing that pens provided in ballot boxes wrote in erasable ink; another showing citizens—paid to hide extra ballots under their clothes and cast them in United Russia’s favor—getting caught in the act and attempting to flee. Once the votes were tallied, United Russia had won about 49 percent of the vote—keeping a slim Duma majority, but dropping drastically from the 64 percent it got in the last election. “It was clear,” reported the New York Times, “that vote stealing and other alleged malfeasance might have spared the presumed beneficiary, Prime Minister Vladimir V. Putin’s United Russia, an even worse blow than it officially received.”

Fraud was reported by multiple sources: Independent monitoring group Golos said it had logged about 5,300 alleged violations; former Soviet leader Mikhail Gorbachev called for an election redo; the Organization for Security and Cooperation in Europe—which provided election monitors—reported frequent violations. Just three days after the December 4 elections, several thousand protesters began demonstrating in Moscow and elsewhere. By December 24, the protests had grown massive; the one in Moscow drew upwards of 100,000 people, despite frigid temperatures, in what Reuters deemed “the opposition’s biggest protest rally since the Soviet Union collapsed in 1991.”

Despite the anti-Putin movement’s growing momentum, experts are unsure of where it’s headed. As Julia Ioffe, Foreign Policy‘s Moscow correspondent, wrote in December: “Even if this is the beginning of something big and civic and beautiful—a ‘Russian Tahrir’…it’s still very much the beginning, and still very much a big ‘if.'”

How is the Putin government reacting? Though the government reportedly arrested nearly 1,000 people during the initial days of protests, the Medvedev/Putin camp avoided addressing the issue directly. At first, they focused on blaming the West, including Secretary of State Hillary Clinton, who they said gave the opposition activists “a signal” aimed at destabilizing Russia. Putin also lashed out at Sen. John McCain, prompted by one of the Arizona senator’s tweets. He also said that he mistook the movement for an anti-AIDS campaign, because the white ribbons protesters wore on their lapels for solidarity, he said, reminded him of condoms. Most recently, the administration has blamed the new US ambassador to Russia, Michael McFaul. In light of his 2001 book, “Russia’s Unfinished Revolution,” some ensuing barbs have practically written themselves; as a commentator on the government-run Channel 1 put it: “Is it possible Mr. McFaul came to Russia to work in his specialty? That is, to finish the revolution?”

Then, last week, in a move that further angered the anti-Putin movement, liberal Yabloko (“Apple”) party leader Grigory Yavlinsky—who’s run for president two times before—was disqualified from the ballot by the current administration, which claims that of the 2 million signatures his party collected to secure his candidacy, about 25 percent are invalid. “Since the mass demonstrations in December, everything’s changed,” reporter Sergei Strokan for Moscow daily Kommersant told the Christian Science Monitor. “Yavlinsky could be an acceptable protest candidate for millions of people who are tired of Putin…So, they decided he had to be excluded.”

How can I stay up to date on the action? For continuing coverage of the protest movement, Johnson’s Russia List is a great Twitter follow. So are Ellen Barry, the New York Times‘ Russia correspondent, Andrew Osborn, Moscow correspondent for the Telegraph, and the English language Twitter account for Russian news agency RIA Novosti. Also, check out Foreign Policy correspondent Julia Ioffe‘s comprehensive coverage of the movement’s evolution.