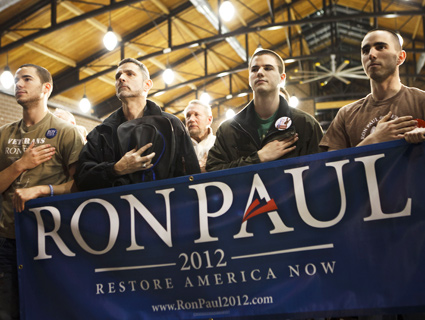 Veterans and supporters rally for Ron Paul in Iowa in December.Patrick Fallon/ZUMA

Conventional wisdom on politics in the military can feel almost as age-old as the Constitution itself: Conservative Republicans are strong on defense, and the military skews conservative and Republican. Foreign wars? Bring ’em on! Unwavering ally of Israel? You betcha. More dollars for defense? If not, you must be with the terrorists.

The 2012 presidential race tells a different story: The lion’s share of political contributions by servicemembers and defense industry workers is going to anti-war, “soft on Israel,” also-ran candidate Ron Paul. In fact, the battle for their dollars isn’t even close: Paul has raised at least $282,868 from individual active-duty servicemembers and Pentagon employees—more than four times what the other three Republican presidential candidates have raised, combined. (President Obama has fared slightly better, drawing $123,644 from that group, but still less than half of Paul’s total. For more, jump to the charts below with the numbers by candidate and branch of the armed services.)

“Clearly there’s something about Paul that appeals to some members of the military,” says Viveca Novak of the Center for Responsive Politics, which provided Mother Jones with the most recent tally of military contributions. “Whether it’s that he speaks his mind, wants to end foreign engagements, has a libertarian’s view of the world—we can’t say.”

One easy explanation has been that Americans in the service have grown tired of a decade of war and identify with Paul’s isolationist anti-interventionist rhetoric. But if the military men and women with whom I spoke this week are any indication, it’s hardly that simple.

Paul’s anti-war stance is certainly part of the draw. Last weekend, the group Veterans for Ron Paul 2012 organized an anti-war President’s Day march on the White House. That organization’s leadership includes notable Iraq Veterans Against the War member Adam Kokesh, who unsuccessfully ran for Congress as a libertarian Republican candidate in 2010, and Jake Diliberto, a former Marine who’s previously worked on Rethink Afghanistan, an anti-war project funded by the left-leaning Brave New Foundation. “I have always been a conservative, and I recognize that I am the kind of conservative that doesn’t exist anymore,” Diliberto told me. As for what unites servicemembers behind Paul, he said, “It is fair to say, we all do not like the current trajectory of US foreign policy, and we are cynical about US national security policy.” He added that he’s personally concerned about Obama’s “targeted killing campaign” against alleged terrorists.

One of the speakers at last weekend’s rally was retired Air Force Lt. Colonel Karen Kwiatkowski, a former Pentagon analyst and key figure in revealing how the Bush administration sold the Iraq war based on bogus intelligence. “I’m 95% in harmony with Ron Paul’s candidacy and his philosophy,” Kwiatkowski—who’s running for Congress in Virginia as a Republican—told me in an email. “I hold the DoD as a federal bureaucracy in a bit more contempt than he does because I spent way more time in it, and I saw close up the actual conscientious, direct political lying to promote war, invasions and occupations—none of which were sanctioned or even reviewed in accordance with the Constitution.”

But Paul’s supporters say the candidate’s “anti-militarism” shouldn’t be confused with being anti-defense. “He’s not opposed to the defense of this country. He’s not opposed to fighting wars that are declared,” a 27-year-old active-duty enlisted soldier in the Army said. (He spoke on condition of anonymity; after a uniformed soldier spoke out at a Paul rally in Iowa, the military warned soldiers about politicking publicly.)

There’s a certain irony in supporting a small-government candidate while working for the largest federal bureaucracy. The politics of it are, well, complicated. “I do wrestle with this conflict of being a Paul supporter while also being a government employee,” the active-duty soldier said. “Ultimately, in my support for Paul, I care more for the restoration of the ideals this country was founded upon than my current well-being.” At the same time, he added that the military saved him from student debt, while many of his friends are struggling to make it “as baristas and waiters” in the civilian world. “I didn’t join the Army to be some hero that defends the Constitution,” he said.

Soldiers tend to see Paul as understanding the pressures they face better than the other candidates because he’s the only one in the group who served in uniform, as a flight surgeon in the Air Force and Air National Guard during the Vietnam era. The libertarian’s service gives him “street cred,” Kwiatkowski noted. “We often in the military have no idea what the foreign policy or the military policy is. All we know is we get told to do things, and often these things are costly, dangerous, and unproductive, and create more insecurity for us and for the country.” 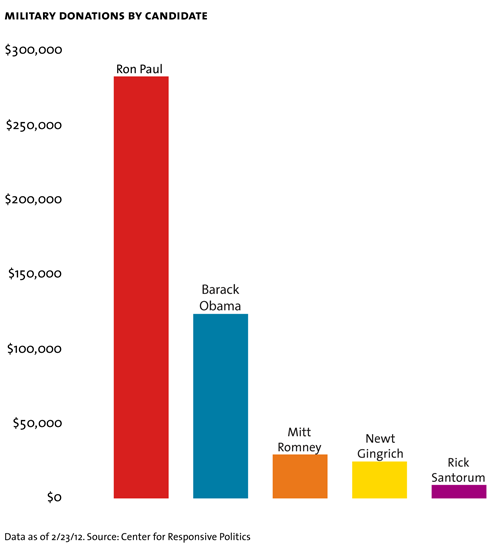 Meanwhile, Paul’s support from defense contractor employees—who donated more than $177,000 to him in 2011—has outpaced that of his competitors, according to Defense News. (Obama leads in that category overall, having pulled in about $348,000.) That may seem downright counterintuitive: Why would workers for companies that profit from war back an anti-pork candidate (self-proclaimed, anyway) who opposes, as Kwiatkowski puts it, “fraud, waste, abuse, warmongering, idiotic leadership, political correctness, and a host of other things”? It’s a matter of ideology, military analyst Loren Thompson explained to Defense News. “There’s a strong libertarian streak among many in the sector,” he said. “Just because people work in the defense industry doesn’t mean that they always vote their economic interests.” (Interestingly, in the 2008 election cycle, Obama and Paul were for a time beating out that other vet in the presidential race, John McCain, for military contributions.)

Campaign contributions aren’t necessarily a great indicator of a candidate’s chances. The figures can’t predict how, or how many service members will actually vote, and even if all of them did, they’d represent a tiny fraction of the US electorate. And these donation figures are a drop in the bucket when it comes to overall campaign spending: Even excluding super-PAC money, Obama’s reelection campaign pulled down $29.1 million in January alone; Paul got $4.5 million in that time, according to filings with the Federal Election Commission.

Still, military voting jumped 21 percent in the 2010 election cycle, according to federal statistics, and it rose fastest—33 percent—among 18- to 24-year-olds, a demographic that heavily favors Paul (and Obama) over traditional conservatives. In an era in which presidential elections turn on a few battleground states, which can turn on a few thousand votes, the military’s love affair with Ron Paul could play a role in determining the eventual GOP nominee.

“We veterans know about the mistakes that previous presidents have made, and we don’t want to repeat them,” Diliberto said of young vets who are loyal to Paul. “We need to change what we do.” 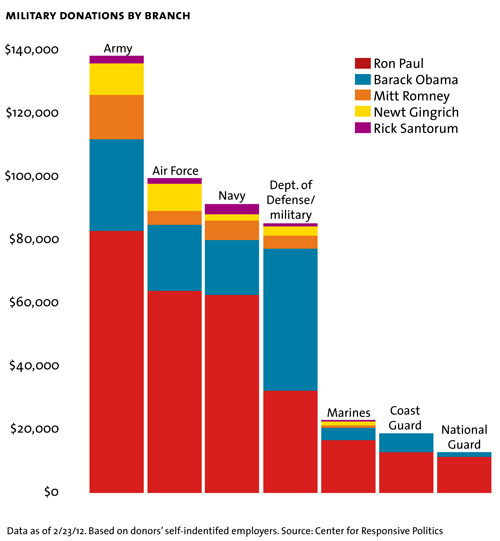