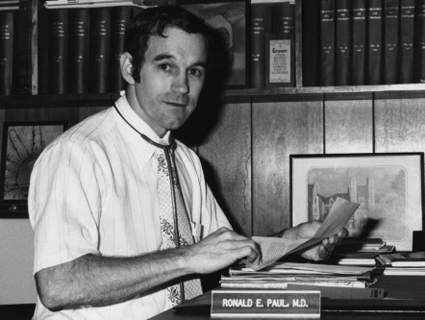 Last year, Republican presidential candidate Ron Paul introduced a bill in Congress that would allow states to ban contraception if they choose.

Paul’s “We the People Act,” which he introduced in 2004, 2005, 2009, and 2011, explicitly forbids federal courts and the Supreme Court of the United States from ruling on the constitutionality of a variety of state and local laws. That includes, among other things, “any claim based upon the right of privacy, including any such claim related to any issue of sexual practices, orientation, or reproduction.” The bill would let states write laws forbidding abortion, the use of contraceptives, or consensual gay sex, for example.

If passed, Paul’s bill could undermine the most important Supreme Court case dealing with contraception—1965’s Griswold v. Connecticut. In that case, the high court found that a Connecticut law prohibiting the use of contraception was unconstitutional based on a “right to marital privacy” afforded by the Bill of Rights. In other words, the court declared that states cannot interfere with what happens between the sheets when it comes to reproduction.

Paul’s bill would also keep the federal courts out of cases like Roe v. Wade and 2003’s Lawrence v. Texas, in which the justices found that privacy is a guaranteed right concerning sexual practices and struck down Texas’ anti-sodomy law as unconstitutional.

It’s well known that Paul, like the other remaining GOP presidential contenders, is no fan of abortion or gay people. But the issue of contraception access is one that has not received nearly as much attention.

Paul’s bill hasn’t received much support in the House. It has no cosponsors and has never made it to a vote on the House floor. But that’s not its biggest potential problem: “I don’t think it would be constitutional to strip the court of that power,” said Bebe Anderson, director of the US legal program as the Center for Reproductive Rights. “You certainly couldn’t do it by law—you’d have to amend the constitution to do that.”

Paul’s campaign did not respond to a request for a clarification on the intent of the his proposed law with regard to contraception. But as Addie Stan notes over at Alternet, Paul’s response to a question about the Griswold ruling during a January presidential debate provides hints about what he might say. “As far as selling contraceptives, the Interstate Commerce Clause protects this because the Interstate Commerce Clause was originally written not to impede trade between the states, but it was written to facilitate trade between the states,” Paul said. “So if it’s not illegal to import birth control pills from one state to the next, it would be legal to sell birth control pills in that state.”

Paul is saying, in short, that his bill wouldn’t actually ban the sale of contraceptives, which would be protected under the Commerce Clause of the Constitution. But that’s an extremely unorthodox interpretation of the Commerce Clause, according to several lawyers Mother Jones contacted. The clause typically only deals with whether or not Congress has the ability to regulate interstate business. Paul is correct that the Commerce Clause would prevent a state from banning the importation of birth control pills from another state. But absent a constitutional right to privacy, states could still bar their citizens from buying or selling birth control within the state. “The right to access contraception has not been based on the Commerce Clause in my understanding,” explains the Center for Reproductive Rights’ Anderson.

Among the other GOP candidates who have weighed in on Griswold, Rick Santorum has said he thinks the Supreme Court made the wrong decision. Mitt Romney, meanwhile, square danced (as usual) around the question at the same January debate, first asserting that he “would totally and completely oppose any effort to ban contraception” before waffling on the question of whether states should be able to enact their own bans. “I don’t know whether a state has a right to ban contraception,” he said. “No state wants to…and asking me whether they could do it or not is kind of a silly thing, I think.”

Romney is wrong to suggest no state would contemplate banning contraception. Mississippi considered a ballot measure last November that would likely have done just that. And if Paul has his way, no court would be able to strike down such a law.