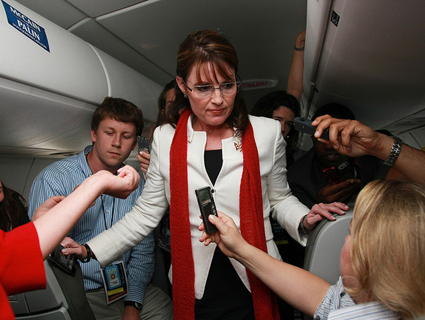 In internal emails with her communications staff, then-Alaska governor Sarah Palin tried to censor a press release put out by an independent organization linking her to controversial Texas pastor John Hagee, the influential Christian-Zionist leader whose statements on Catholicism and Hurricane Katrina caused Sen. John McCain (R-Ariz.) to publicly repudiate him in 2008. The exchange comes as part of a new trove of emails released by the the Alaska Secretary of State in response to a public records request first filed by Mother Jones.

After Palin appeared at an event in March 2009 sponsored by Hagee’s organization, Christians United for Israel, CUFI spokesman Ari Morgenstern sent the governor’s office a draft of its press release trumpeting the event, a courtesy often provided to high-profile figures. Although William McAllister, Palin’s communications director, initially wrote back saying there was no need for coordination, Palin herself jumped in and began to micro-manage. She suggested two more individuals whose names she’d like to see referenced in the press release (including an Anchorage rabbi), and added, “Let me know when they have done so.”

An hour and a half later, she had apparently thought about it some more and come up with an additional request: “Eliminate reference to Hagee.” But she wanted her role in this de-Hageee-ficiation kept a secret. “[Y]ou guys do that—don’t tell them ‘the Governor said…'”

The idea that Palin would want to purge the name of CUFI’s founder from CUFI’s own press release struck her staff as an odd request. “I’m not a fan of Hagee, but I don’t know how to propose eliminating him without offering an explanation for the request,” McAllister wrote back. “In presenting this to use, I think mostly they wanted to be sure the reference to you raised no objections.” At that point, Palin decided to take the conversation off list, asking McAllister to call her.

Palin’s reluctance to be associated with Hagee was a marked shift from her positions a few years earlier, and reflected her increasing discomfort with the media spotlight. Palin had expressed her admiration for Hagee previously. In a May 3, 2007, email, Palin had asked her scheduler if she had time to attend a Hagee event at the Juneau Christian Center. When she was informed she had the day off, she replied, “I should try to get back to juno for this one.” At that event, she and Hagee were joined by country singer Randy Travis (who starred in the film adaptation of Hagee’s end-times thriller, Jerusalem Countdown).

This time around, no scheduling conflict prevented Palin from attending CUFI’s event. The draft press release noted that she had spoken at two separate functions supporting Israel the previous week in Juneau and Anchorage, which were attended by a few hundred people. But afterward, she preferred that the rest of the world not know that just one year after McCain was forced to renounce Hagee, she was still hobnobbing with the pastor’s group.