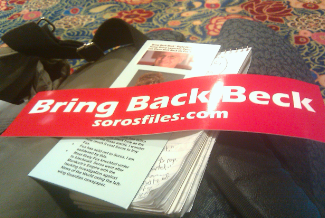 Photo by Tim MurphyShona Darress has it on good information that George Soros, liberal financier, scourge of the right, quarterback of the no-huddle offensive against all that makes America great and holy—the Sultan of Slant, the Maharishi of Misinformation, the Big Bopper of Bias—is secretly controlling the flow of information at Fox News. This might come as a surprise to some of you, given Fox News’ fairly unambiguous vendetta against Soros and the progressive causes he helps support. But it is apparently the reality we must deal with, and Darress has the charts to prove it.

When I approach her booth (sponsored by the group “America’s Survival”) deep in the bowels of the Conservative Political Action Conference, and ask how she possibly came to the conclusion hinted at by her display, she quickly points to a smiling face on a poster a few feet behind her. “This, here: Sally Kohn. She’s Soros-funded.” Darress points to the next face, right below. “Jehmu Greene. She’s Soros-funded.” Although Sally Kohn is, according to Darress’ literature, “the new face of Fox News,” I’ve never heard of her; Green’s role at Fox is as the token liberal on Sean Hannity’s nightly program, a position that seems to exist solely to give Hannity and his panelists someone to yell at. “They’re publicly owned,” she says when I ask how Soros came to control the country’s leading outlet for conservative news. “It’s not that they went to Fox News and said we want to buy your stock—they just did it.” The pamphlet she hands me spells it out more clearly: “Most likely Fox knuckled under to blackmail. Soros went after Murdoch’s Empire with the hacking investigation against News of the World using the left-wing Guardian newspaper.”

All of which explains why she’a hawking the bumper stickers that drew me in to begin with—red ones with “Bring Back Beck” in big white letters. “Glenn got shoved out because of Soros. He was outing everybody, wasn’t he? He wasn’t shutting up about George Soros! Soros didn’t really like that.” As for Beck, “He’ll stay undercover a little bit longer. But the news is out.”

Update: Sally Kohn tweets: “I am NOT nor ever have been funded by Soros, despite Right wing assertions to contrary.”