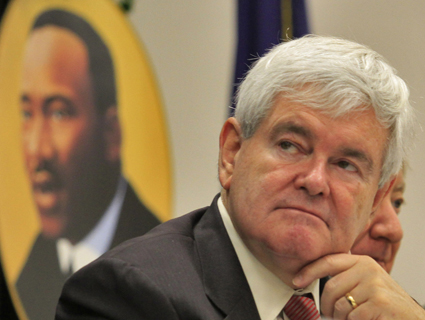 Newt Gingrich stepped in it in 2007 when he told an audience of conservative activists that Spanish is a “ghetto” language. In an address to the National Federation of Women, the former speaker argued that, “We should replace bilingual education with immersion in English so people learn the common language of the country and they learn the language of prosperity, not the language of living in a ghetto.” He later took to YouTube to issue una apologia—as they say in the ghetto—in Spanish. Now that he’s a candidate for president, Gingrich has changed his tone, insisting that his quote was taken out of context. In January, he told reporters in Miami, “We didn’t want any children trapped in a ghetto, it was a reference to the Middle Ages—being a historian.”

Recent history, though, suggests that Gingrich has changed his once-moderate views. In a 1998 speech at the League of United Latin American Citizens Conference, Gingrich praised Tony Trujillo, superintendent for the El Paso public school system, for striving for universal bilingualism: “He said we have a specific vision statement: Every child should graduate bilingually fluent and capable of doing college work,” Gingrich said. “Now think about that thought. In one sweeping sentence, he eliminates the concern about English-only, by saying flatly of course we’ll learn English, but in the modern world market, shouldn’t we learn more?”

A year earlier, he’d put a uniquely Gingrichian twist on bilingual education in an interview with Joe Klein for the New Yorker:

When he isn’t consumed by pride or anger—which hasn’t been often, publicly—the Speaker of the House has a persistent interest in the lives of non-Republicans. He has a guileless, do-it-yourself hobbyist’s fascination with social policy. “Do you realize that there are two hundred languages spoken in the Chicago school system?” he said now. “That’s an asset, not a liability. Let’s pair up the kids. You get Sally to speak Cambodian and and Sally gets you to speak English. If they succeed, we give each of them a thousand dollars. We’d have kids practicing language seven days a week.”

If there’s a unifying theme between Gingrich’s late ’90s agenda and his contemporary vision, it’s apparently been lost in translation.