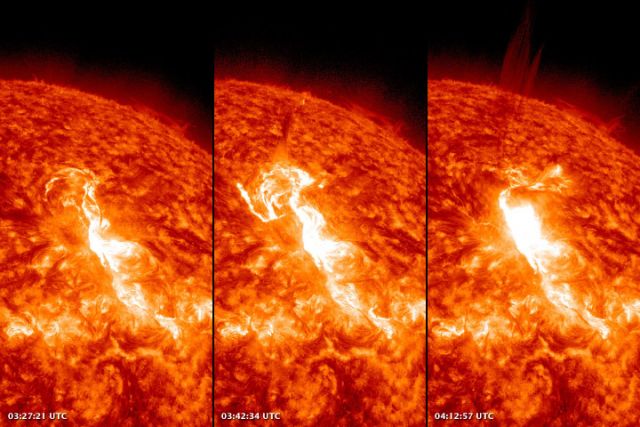 After the quietest solar activity in a century, our star is flaring up towards a predicted solar maximum in February 2013.

The photos above, taken only minutes part yesterday, show a flare of superheated and magnetically supercharged gas. In the third image (right), taken 45 minutes after the first (left), you can see the coronal mass ejection of a stream of solar plasma flowing into space towards Earth.

The high-latitude solar flare was measured as M8.7 in intensity, just below the most intense “X class” of flares. The eruption sent a stream of fast-moving, highly energetic protons toward Earth, provoking the most intense solar energetic particle storm—an S3 on NOAA Space Weather Prediction Center’s scale—since 2005. 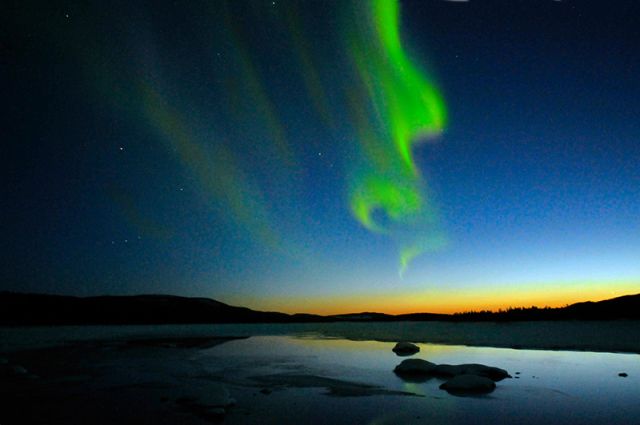 All that fiery activity on the Sun translates into the most Earth’s most ethereal light show. In 1859 the largest solar superstorm in recorded history, the Carrington Super Flare, gave an unbelievable worldwide performance. From Wikipedia:

On September 1–2, 1859, the largest recorded geomagnetic storm occurred. Aurorae were seen around the world, most notably over the Caribbean; also noteworthy were those over the Rocky Mountains;that were so bright that their glow awoke gold miners, who began preparing breakfast because they thought it was morning. According to professor Daniel Baker of the University of Colorado’ Laboratory for Atmospheric and Space Physics, “people in the northeastern US could read newspaper print just from the light of the aurora.”

But it gets weirder than that. Given exactly the right circumstances, they can facilitate enough geomagnetically induced current from the electromagnetic field to allow telegraph transmissions even when the power is switched off.

This conversation was between telegraph operators in Boston and Portland, Maine on the superstorm night of 2 September 1859. From Wikipedia:

Boston operator (to Portland operator): “Please cut off your battery [power source] entirely for fifteen minutes.”
Portland operator: “Will do so. It is now disconnected.”
Boston: “Mine is disconnected, and we are working with the auroral current. How do you receive my writing?”
Portland: “Better than with our batteries on. Current comes and goes gradually.”
Boston: “My current is very strong at times, and we can work better without the batteries, as the aurora seems to neutralize and augment our batteries alternately, making current too strong at times for our relay magnets. Suppose we work without batteries while we are affected by this trouble.”
Portland: “Very well. Shall I go ahead with business?”
Boston: “Yes. Go ahead.” 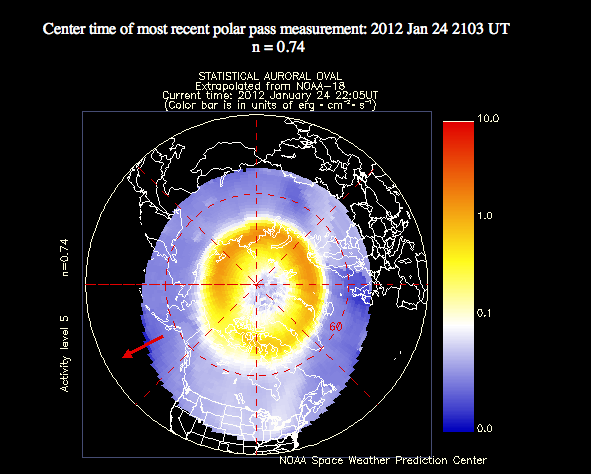 Here’s where you might see an aurora. Current extent and position of the auroral oval in the northern hemisphere, extrapolated from the most recent polar pass of the NOAA POES satellite: NOAA.

The current solar maximum is not expected to be anywhere near as strong as the Carrington Super Flare, a 1-in-500-year superstorm. However it’s already causing disruptions. Delta Airlines announced today that it’s rerouted polar flights between Detroit and Asia. From Reuters:

“We are undergoing a series of solar bursts in the sky that are impacting the northern side of the world,” said Delta spokesman Anthony Black on Tuesday. “It can impact your ability to communicate… So, basically, the polar routes are being flown further south than normal.”

For those not fortunate enough to live in the high latitudes to witness aurorae for themselves, there are now loads of great video timeplapses online. This one has some particularly cool looking ribbon aurorae.

And here’s a dry but informative video explainer, if you’re wondering exactly how it works.

The Aurora Borealis from Per Byhring on Vimeo.