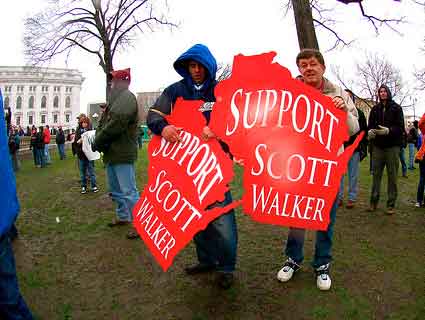 As soon as April, millions of Wisconsinites will vote on whether to oust Gov. Scott Walker—a rising Republican star and arguably the most polarizing governor in politics today—just two years into his first term in office. Walker’s recall election is a referendum on his hardline conservative agenda, including curbing collective bargaining rights for state workers and slashing education funding. For Walker himself it’s a pivotal moment in his young political career.

The recall fight is also a crucial test for the tea party, the populist movement that helped elect Walker in 2010, vigorously defended him during last winter’s protests over his anti-union “budget repair” bill, and has been organizing to prevent his ouster. The movement’s support is flagging, its clout dwindling, its buzz mostly gone. But now, tea partiers at the state and national levels are rallying around Walker’s recall defense, hoping a victory could bolster the movement in a critical election year. A defeat, on the other hand, would give ammo to liberals and conservatives alike who say the tea party is all but dead.

In recent months, the Tea Party Express, a national organization, and the Campaign to Defeat Barack Obama, a tea party-linked political action committee, have waded into the recall fight, blasting out more than a dozen emails to supporters and launching a $100,000 “money bomb” fundraiser to help defend Walker. They argue that the outcome has national implications for the 2012 presidential election; a Tea Party Express email to supporters in January announced that Wisconsin is “Ground Zero for the Battle Against Obama’s Liberal Agenda.”

The Campaign to Defeat Barack Obama says it has raked in small donations from supporters throughout the country, from Napa, California, to Nashua, New Hampshire. The group’s director of grassroots outreach, Donald La Combe, wrote in an email to supporters that funds would go toward TV and radio ad campaigns as well as “war rooms” throughout Wisconsin to bolster Walker’s support among voters. “We’re going to win this fight, we’re going to DEFEAT the RECALL, and we’re going to stop Barack Obama from getting Wisconsin’s 10 Electoral Votes,” La Combe wrote. (Neither of the above groups responded to requests for comment.)

Two Wisconsin tea party groups, We the People of the Republic and the Wisconsin Grandsons of Liberty, claim to have signed up 11,000 volunteers and trained 4,000 of them to scrutinize the estimated 1 million signatures gathered by Walker foes. That signature total was nearly two times the 540,208 needed to launch the recall process; nonetheless, the two groups’ vetting operation, VerifyTheRecall.com, was created to root out duplicate signatures and “downright fraud” found in recall petitions for Walker and Lt. Governor Rebecca Kleefisch, their website says. Meanwhile, the Wisconsin branch of Americans for Prosperity, the Koch-funded group that helped train and grow the tea party, held a town hall earlier this month touting the budget reforms enacted by Walker and state Republicans.

It’s not hard to see why the tea partiers would go all-in to defend Walker. There is no clear tea party favorite left to rally behind in the 2012 GOP presidential nomination fight with Michele Bachmann, Rick Perry, and Herman Cain all out of the race. Walker, on the other hand, is right in the tea party’s sweet spot: He battles unions, axes state spending, rejects federal funding, and is rigidly pro-life and pro-gun rights.

The tea party also has a lot of political capital invested in Walker. When intense anger over Walker’s anti-union “budget repair” bill spilled into the streets of the state capital of Madison last February, Americans for Prosperity swooped in to hold a counter-protest defending Walker. Other tea party groups also rushed to the aid of Walker and ripped his critics.

“Walker is a central figure to them, their Sir Galahad battling the evil unions,” says Theda Skocpol, a Harvard sociology professor and coauthor of The Tea Party and the Remaking of Republican Conservatism. Walker ultimately signed the bill into law in March, and it later survived multiple legal challenges.

How much influence does the tea party have at this point? An analysis last July by the liberal blog Think Progress found that the number of events held each month by the Tea Party Patriots, a national group, had dropped by half in the first seven months of 2011 compared with the same period in 2010. Harvard’s Skocpol affirms that tea party events “are falling off some, but there is not a collapse.”

A recent Marquette University poll (PDF) found similarly lackluster support for the tea party in Wisconsin. Forty one percent of respondents thought poorly of the tea party while 33 percent viewed it favorably.

Still, even if the tea party suffers a major defeat with Walker’s recall, their influence will be felt for years to come given the hardline agendas promoted by state and federal lawmakers swept into office in 2010. And Skocpol says the recall election could be a galvanizing event for the movement. “Because all of the tea party forces have not been able to unite on a GOP candidate for president, they’re going to redouble on things like the Wisconsin crusade,” she says. “Grassroots tea partiers everywhere will be be following and contributing to the Walker campaign.”