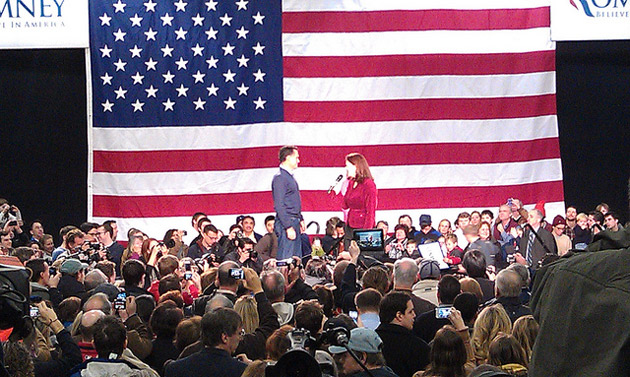 Sen. Kelly Ayotte (R-N.H.) introducing GOP candidate and former Massachusetts Gov. Mitt Romney at a rally in Derry, New Hampshire WEBN-TV/FlickrFor the past few days, New Hampshire has been hosting a theater festival like no other. Featuring five alpha-male stars, it has attracted legions of media and transformed frigid football fields, stuffy gymnasiums, and metal fabrication factories into site-specific one-man shows. As a playwright and actor, I came to New Hampshire to do research on the quadrennial spectacle for a new play I’m developing. Here’s a quick review of this year’s acts (or campaign events, if you must) so far.

The Mitt Romney Extravaganza on Sunday morning combined Broadway polish with a luscious set. Inside the Rochester Opera House, Romney bounded onstage in sleek brown jeans and flashed a megawatt smile that seemed to scream, “Move over Hugh Jackman!” Backed by his J.Crew catalog-ready family of square-jawed sons, he entered to “Born Free,” that Kid Rock anthem to being “free, like a raging river” and “wild, like an untamed stallion.”

Romney’s monologue was highly polished; it even included an Obamaesque line: “I was just a high school kid with skinny legs.” Meanwhile, his ad-libs were pricelessly awkward, including this early riff: “I can feel the warmth in this room, not just temperature-wise, but emotional-wise.” Romney has a nervy, almost franticly enthusiastic delivery—think Jimmy Fallon. And he never stops trying to improve his routine, though it can be rocky along the way. Once again quoting from the patriotic song “America the Beautiful”—material he’d given a rather odd twist in Iowa—he quipped, “I told people in Iowa corn counts as amber waves of grain.” That only drew a few light titters.

But fans and critics seemed to agree that the Romney show is a juggernaut. New York Times photographer Jim Wilson, who’s been covering the New Hampshire productions since 1976, said of Romney’s: “It’s one of the better-crafted campaigns I’ve seen at this stage. It’s operating more like a campaign would in the fall.” Pete Foley, 55, who’d brought his nephews up from Concord, Massachusetts, was wowed, saying, “That’s the first time that I’ve thought Romney is going to be a problem” for Obama, whom Foley supports.

The Ron Paul Carnival, which was staged in the basement conference room of an outdoorsy resort lodge in Meredith on Sunday afternoon, is another heck of a show, though for different reasons. With supporters and reporters alike packed in and overflowing out the side doors, all I could see was Paul’s grey head bobbing above the crowd. He seemed a reluctant ringmaster, while his supporters—who record, photograph, and document his events with an unparalleled zealotry—are just an innocent question away from showering you with free DVDs, copies of the Constitution, and terrifying possibilities for abuses of federal power.

“What if Obama rounded up all the journalists?” asked Jim Burr, 59, who had driven 17 hours from Pittsburgh to support Paul.

This lends a kind of performance-art feel to the proceedings. The carnival had spread throughout the state, with Paul’s supporters attending events not just for their own but for all of the candidates, holding up signs and greeting everyone with a combination of folksy politeness and the kind of esoteric enthusiasm found among Dungeons and Dragons aficionados.

The Newt Gingrich Experience, which I sweated through at the Pinkerton Academy gymnasium in Derry on Sunday evening, is like a strange Chekhov revival that you know you should appreciate more, but really you just can’t wait for the intermission. And it never comes, as Gingrich cruises right into audience questions. Gingrich himself was unfazed by the stilted atmosphere, declaring that he felt “an electric air” in the room, while someone coughed softly in the back. There’d been some music before things got started—’80s themes like Joe Esposito’s “You’re the Best Around” and country classics like Brooks and Dunn’s “Only in America”—but that, and any sense of fun, drained away as the professorial Gingrich took to the stage. He had a motley crew of supporters assembled behind him, but a couple rows of goateed guys in sweatshirts and boots next to a small flag was hardly enough to make the production pop.

Gingrich does have a sense of humor, yet somehow he’s not funny at all. He got off a few plodding jokes, proudly citing Ronald Reagan: “When you’re brother-in-law’s unemployed, it’s called a recession. When you’re unemployed it’s called a depression. When Carter’s unemployed, it’s called a recovery.” This got him some laughs, prompting him to add, “Don’t be surprised if I use that again.” Other than that it was his standard stemwinder, full of very unpregnant pauses and self-assured bloviations. Perhaps the oddest part of his performance was his wife Calista, who stood by him the entire time, smiling but practically frozen in place. Her bright red lipstick and helmet of brilliant blond hair mesmerizingly suggested a bid for best supporting actress in an inanimate role. After 40-plus minutes you started to feel like somebody should just take pity and grab her a chair.

There is a dreary, almost Brechtian quality to the Gingrich performance, which leaves you wondering if there’s a subtext that’s greater than just the words you’re missing. His imagery tends to be vaguely dark and foreboding. Still, Gingrich has an avid fan base of his own, which included John Baker, 54, from Derry, a route salesmen for Frito Lay, who nodded and called out in affirmation several times. “Newt seems to be the brightest bulb,” he said, explaining his support. “He understands the world better than I do.”

The Santorum Penance took place on the Rivier College football field at 9 a.m. on Monday. It was a frigid morning. The media, at least, was out in force. You had to admire Santorum’s gutsy attire in the 29-degree weather: blue jeans, brown boots, and just a light blue jacket. Riding high on his Iowa results, Santorum exuded a self-awareness as refreshing as the bracing air. “Small business is a big deal here in New Hampshire, right?” he asked. When that was greeted with little more than three fading claps from a lady wearing gloves, he quipped, “Applauding with gloves on is not the most effective thing, you can keep the muted applause.” Points for improv. And Santorum’s performance was strong on gestures; in addition to a thumb jab, he made a pummeling motion with his fist worthy of Borat when he said, regarding Obama and business, “if it’s big, he likes it, if it’s small, he’ll crush it.”

I tried to ask an event producer why they held the show outdoors on a football field in early January in New Hampshire, but he waved me off. At most there were about 50 supporters in attendance, and they were outnumbered by all the reporters. Two of the Santorum faithful, Matt Noonan, 45 of Drake, Mass., and Rich Parks, 41, of Nashua said they loved the simple setting: the stark beauty of the New Hampshire woods and the dual flags flanking the stage. Noting their dueling Yankees and Red Sox caps, I asked if the New Hampshire show was as exciting as baseball’s great rivalry. “Nah, nothing’s better than Red Sox-Yankees,” Parks replied.

The Jon Huntsman Air Show on Monday night gave notice that Romney’s is not the only Broadway-quality production on tour in New Hampshire. Projected lights bathed the white columns of the Exeter town hall exterior in blue and red, which made it feel like you were walking into a silky concrete American flag. In the press balcony, there was Huntsman, looking every bit a Top Gun in a black leather bomber jacket and brown jeans, sitting on the bunting-wreathed banister and chatting coolly with Fox News’ Greta Van Susteren. Huntsman’s people distributed red, white, and blue pompoms and the faithful kicked off several rousing chants of “Join The Hunt!”

Then, bathed in hot white lighting, and with U2’s “Beautiful Day” pumping, Huntsman led his shining blonde wife Mary Kaye through the crowd. When he hit his mark in the center of the hall, he raised his arms in triumph, gave a couple of champion fist pumps, and basked in the adulation. Introduced by the county commissioner as no longer the “margin of error candidate,” the surging Huntsman made it clear that if he’s going down in the primary, he’ll do it in a blaze of glory that would make Goose proud. The Exeter Town Hall was ready for liftoff. “Can you feel the energy?” Huntsman asked. The crowd roared. His monologue was short on policy and long on pump-up, leading to chants of “USA!” and “Huntsman!”

“That is a pretty awesome deal when you’re going down the highway and you see a sign with your name on it—that’s pretty cool!” he shouted over the crowd. He gave the most extemporaneous monologue I’d seen yet, including lines like, “We’re gonna tell Congress, we’re gonna dock your pay till you balance the damn budget!” and “We’re a blue-sky-problem-solving-optimistic-can-do-people!”

As the music swelled at the end, a huge bang rang out and confetti showered down, startling the crowd and cranking the volume to eleven. Whatever transpires with Tuesday’s vote, most of the folks who showed up for this performance will probably agree that they got plenty of bang for their buck.