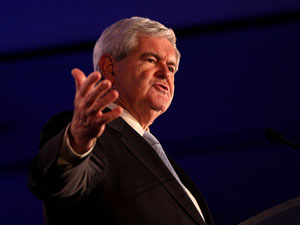 When Newt Gingrich launched into his speech Friday night at Salem High School, it seemed as if his pledge to remain above the fray of negative ads and campaigning was about to fly out the window. He’d barely taken the stage when he threw a jab at his campaign trail nemesis, Mitt Romney, who earlier in the week Gingrich had called a “liar” for denying knowledge of a barrage of super-PAC attack ads that the former House speaker blames for undercutting his support in Iowa.

“How many of you have noticed that the state line seems to have a really significant, almost mythic, impact on behavior?” he asked, referring to Massachusetts, where Romney had served as governor, to hoots from the audience. “On one side more taxes and bigger government, on the other side lower taxes and less bureaucracy… There really are very different psychological mindsets.” He arrived at the point: “The only reason I raise that is that I think there’s a remarkable difference between a Reagan conservative and a Massachusetts moderate.”

Was Newt—as some in the media had predicted—about to explode in a supernova of anti-Romney vitriol? It seemed this could be the moment.

No. Having taken a quick swipe at Romney, he pivoted, directing his fire at President Barack Obama and acting much more like a front-runner than a 4th-place finisher in Iowa. Trotting out a controversial line he has deployed before, Gingrich dubbed Obama “the best food stamp president in American history.” And he framed the November election as a battle for the soul of America, which he claimed would not recover for “two generations” should Obama be reelected again. “Is this the kind of country where the people are sovereign and the government is subordinate?” he asked. “Or is this a country where the government is sovereign and the people are subordinate?”

Gingrich highlighted his congressional career (leaving out the part where he was slapped with a historic ethics committee sanction and pushed out of the speakership by his own comrades), ticking off his role in pushing through welfare reform, cutting taxes, and rolling back regulations. “I’m the only candidate in this race who has changed major processes in Washington, DC.”

Here, Gingrich paused to take another quick jab at Romney, but the attack was tepid, as compared with the bombast he’s legendary for: “Governor Romney accommodated Boston much more than he changed it.”

Gingrich went so far as to portray himself as a Washington outsider. “If you’re in the Washington establishment, whether you’re a Democrat or Republican, the fix is in,” he said. “You go to the same cocktail parties, you go to the same restaurants, you go to the same country clubs… You’re  part of a permanent establishment… I have no interest in being part of it.” This was a stretch coming from a former House speaker who resides in the ritzy Virginia suburb of McLean, home to many of Washington’s media and political elite. Gingrich, after all, has built a multi-million-dollar empire for himself based largely on his Washington experience and contacts.

Gingrich told his audience that his competitors planned to “spend millions trashing me” via super-PACs, a nod to the Romney-allied group, Restore Our Future, which rolled out a series of attack ads against Gingrich in Iowa and plans to do the same in New Hampshire. “I’m not going to engage in my negative nasty ad to match their negative nasty ad, but I will engage in great clarity,” he said. “I am dramatically more conservative than Mitt Romney.”

How long with will this new, more restrained Newt hold out against the impulses of the bomb-throwing political gladiator within? Unclear. For now he’s taking the medium-high road. But given his past, any day Gingrich’s strategy could shift in a nanosecond from waging a battle of ideas to just waging battle.