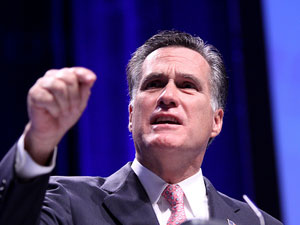 To kick off the big pre-voting weekend in New Hampshire’s first-in-the-nation Republican primary contest, Mitt Romney held a rally in the gym of Pinkerton Academy in Derry, New Hampshire, early Saturday morning. Before a crowd of several hundred people—dozens of whom seemed genuinely excited to be in the vicinity of the GOP front-runner—Romney blasted President Barack Obama, charging that the president does “big things, bad things, expensive things.” (He repeated a version of this clumsy formulation several times, making it seem that Obama was a big, bad wolf.) Romney falsely claimed that Obama had promised that the $787 billion stimulus would bring unemployment below 8 percent. He falsely asserted that Obama’s Wall Street reform was crushing community banks. He declared that the president doesn’t understand “the nature of America”—meaning the values of freedom and opportunity. And he noted that the 2012 election is about the “soul of America”:

What kind of America [are we] going to have… Are we going to remain a merit society?… Some people don’t like free enterprise and capitalism… There are those who say let’s not go down this path. Let’s instead take a course to become a European-style welfare society where the role of government is to take from some and give to others. It sounds good. It creates greater equality. But it also creates poverty. Look at the history of the world. Even in Europe—which is not as free enterprise-oriented as we are—the income per person in Europe is 50 percent less than in this country. I do not want America to follow the path of Europe.

He then recited the words to “America the Beautiful” (a Romney campaign staple of late).

European-style welfare societies lead to poverty? That’s what Romney said, neglecting the recent news that the poverty rate in the United States increased to 15.1 percent in 2010, up from 14.3 percent the previous year, due to the recession that exploded at the end of the Bush-Cheney administration. Romney also appeared ignorant of the general view that there is more poverty in the United States than the nations of western Europe. It can be tough to compare poverty rates among different societies, but according to an Organization for Economic and Cooperation Development report issued last year, the level of poverty in the United States was more than twice that of the Czech Republic, Denmark, Hungary, Austria, the Netherlands, France, Slovenia, Norway, Finland, Sweden, and Switzerland. It was also greater than that of Germany, Belgium, Ireland, Poland, Britain, Italy, Greece, Portugal, and Spain. One recent study found that the poverty rate for single mothers in the United States was 49 percent, compared to a 26 percent average for 15 “high-income” European nations. (Denmark: 8 percent; Sweden: 10 percent; and Finland: 11 percent.)

So what’s the basis for Romney’s claim that European social welfare programs generate poverty? As is often the case, he was not taking questions from reporters at this stop. But at the end of his speech, I pushed through the throng waiting to shake his hand or grab a photo with him, and waited on the rope line for the former corporate executive to come by. When Romney neared, I asked, “Do you have time for one question?”

Amid the folks pushing baseballs and photos at him for his signature, Romney looked up and paused to hear my query.

“Do you believe,” I asked, “that there is more poverty in Europe than the United States?”

Is that before or after government payments, he responded.

You can define it any way you want, I said.

“Well, I’ll have to think about that,” he said, and started to shuffle away.

But, I said (quickly), you just stated that European-style welfare creates poverty.

“No, I didn’t,” Romney replied. “I said, look at Cuba, North Korea, and the former Soviet Union.”

He hadn’t said anything about those countries. He hadn’t mentioned them once in his speech.

No, I insisted, you said European-style welfare leads to poverty. That’s precisely what you said.

No, Romney repeated, I was talking about Cuba, North Korea, and the former Soviet Union.

It was hard to know how to respond to this utterly false denial. (Later on, I thought of an appropriate reply: “I’ll bet you $10,000.”)

Romney then said, “I have to go”—and returned to his fans. As one held out a copy of his recent book, looking for Romney’s John Hancock, Romney turned to an aide and asked, “Are we doing autographs?”

Meanwhile, another Romney aide rushed over to me and demanded to know my media affiliations. “We’re not taking questions,” he said. After he left, several Romney supporters who had heard my exchange with the former Massachusetts governor told me that, of course, there is more poverty in Europe than the United States. How do you know that? I asked. We know, they said, everyone knows that.

So what to make of this exchange with Romney? Is his brain so fried by months (or years) of campaigning that he cannot recall what he said minutes earlier? That seemed unlikely. The European-way-sucks leitmotif was an integral (and previously used) component of his stump speech. He backed it up with stats (which only proved that wealth in the United States is distributed far more unevenly than in Europe). Had Romney slipped up during his speech and left out an intended reference to the bad-boy nations of Cuba, North Korea, and the former Soviet Union? I doubt that—given that his entire riff was that Obama doesn’t comprehend the fundamental greatness of the United States and wants to turn it into an European-type country. Romney wasn’t contending that Obama yearns to transform the United States into a North Korean-style society. (Some conservatives may say that, but not Romney.)

The best I can figure is that Romney and his aides-de-camp calculate that when it comes to deriding Obama as the Other—someone who is not a true American at heart—tying him to Europe is an effective device and, once engaged in this exercise, it is best to be pile on and damn accuracy.

It was no surprise that this rhetoric played well with Romney supporters who had flocked to Derry. Folks don’t come to political rallies to ponder or challenge the factual basis of the red meat thrown at them. The question is whether Romney will continue to get away with this and other misrepresentations, if he wins the chance to court independent and moderate voters in the general election. With unemployment still high and the public mood so sour, any GOP candidate who snags his party’s presidential nomination will have a 50-50 shot at vanquishing the president. And there’s plenty of room in Campaign 2012 for a true clash over the nation’s values and the best visions for its future. There’s not much need for Romney to lie or misstate these sorts of facts. Which makes his tendency to do so all the more puzzling—and troubling.