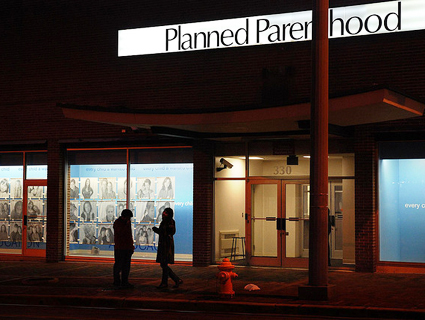 Susan G. Komen for the Cure, the ubiquitous charity dedicated to fighting breast cancer, is cancelling hundreds of thousands of dollars worth of grants to Planned Parenthood that help pay for cancer screenings, the Associated Press reported on Tuesday.

Komen has been under pressure from anti-abortion groups to drop its funding for Planned Parenthood, which received $680,000 from the anti-cancer group in 2011. Most recently, abortion foes forced a Christian publisher to stop printing pink Komen bibles and pressured bookstores to take them off shelves. Groups have also called on supporters to boycott Komen entirely, and decried the group as a “lie from the pit of Hell.” But Komen says the anti-abortion groups’ activism didn’t play a role in its decision, which it claims is the result of a new internal policy forbidding it from funding any organization that’s currently under investigation in Congress. (Planned Parenthood is the target of a congressional investigation, but that probe is led by an anti-abortion lawmaker who has sought to end all federal support to the group.)

One thing the AP piece misses, however, is that pressure to end the Planned Parenthood funding may have also come from within Komen itself. Karen Handel was named senior vice president at Komen in April 2011, and is now “leading the organization’s federal and state advocacy efforts.” But before joining Komen, she was a candidate in the Republican gubernatorial primary in Georgia, and was critical of Planned Parenthood. “[S]ince I am pro-life, I do not support the mission of Planned Parenthood,” she wrote in a blog post, and pledged to eliminate all state funds for breast and cervical cancer screening to the group if she were elected governor.

Handel was criticized during the campaign for a vote she made as a county commissioner to provide grant money to Planned Parenthood for cancer screenings. The issue was a contentious one in the Republican primary, with Handel responding to that criticism by attacking her opponent for voting to fund Planned Parenthood in the state legislature.

That’s not to say that Handel is definitely behind Komen’s decision to drop funding to Planned Parenthood; I have no idea what role she may have played, if any, and Komen didn’t immediately respond to a phone call and email seeking comment.

The anti-abortion groups’ campaign to force Komen to cut its funding for Planned Parenthood has been going on for several years, but this is the first time Komen has caved on the issue. Planned Parenthood issued a statement on Tuesday afternoon noting that it is “alarmed and saddened” that Komen had “succumbed to political pressure” in ending the grants, which have paid for 170,000 clinical breast and 6,400 mammogram referrals since the groups began their partnership in 2005.