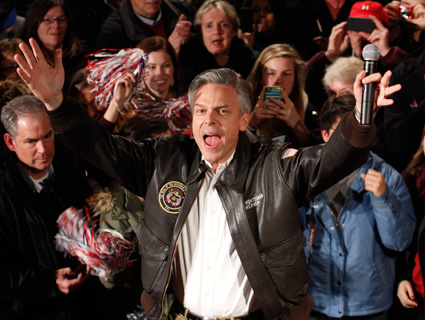 Soon after the news networks confirmed Jon Huntsman’s third-place finish in New Hampshire’s primary, Huntsman strode onto the stage at a Manchester bar to address his supporters. Huntsman’s family joined him, including a elderly man integral to the future of Huntsman’s campaign: his billionaire father, Jon Huntsman Sr.

A powerful chemical titan, Jon Sr. has played a key role supporting his son’s candidacy. He helped finance a super-PAC called Our Destiny that’s spent $2.1 million so far backing Huntsman Jr. And going forward, the only person likely to give the Huntsman campaign the kind of financial jolt it needs to stay alive is Jon Sr..

On Tuesday night, I twice asked Huntsman Sr. if he planned to step in and support his son’s campaign going forward. Both times he dodged the question before security personnel led him into a waiting car. Here’s our brief exchange:

AK: I was just wondering about the Our Destiny super-PAC. Do you plan to support it or support your son’s campaign? Any comment on that going forward?

JH: Oh, I think he’s just done a great job tonight. We love him very much.

JH: [Pauses and smiles.] Thank you. Thank you very much.

At the event, Huntsman Jr. announced he would continue his bid for the White House, heading now to South Carolina, which holds its presidential primary on January 21. “I’d say third place is a ticket to ride,” Huntsman told the crowd. “Hello, South Carolina!”

South Carolina’s primary fight is shaping up to be a bruising battle, with campaigns and super-PACs spending more on ads there than in New Hampshire. The New York Times reported Tuesday that 2,800 campaign ads had appeared in New Hampshire compared to 5,500 in South Carolina. Much of ad spending will come from super-PACs, like the pro-Romney Restore Our Future group and pro-Gingrich Winning Our Future.

Huntsman will have to duke it out on the airwaves as well if hopes to compete in South Carolina. But for now, his bankrolling dad doesn’t sound too enthusiastic about injecting more of his wealth into the fight.