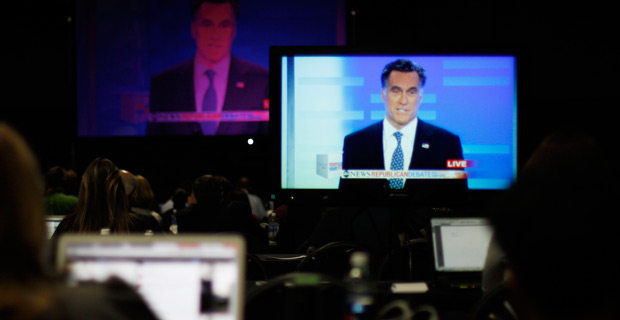 Read on for the Mother Jones news team’s coverage of Monday night’s debate in South Carolina.

Where Does Mitt Romney’s Bain Jobs Figure Come From? 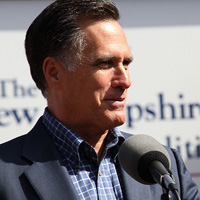 You can almost set your clock to it at this point. If Mitt Romney gets a question about his record at Bain Capital at a GOP presidential debate, he’ll inevitably talk about how many jobs he created as chief executive of the venutre capital firm. At last Saturday’s debate in New Hampshire, he suggested he had created 100,000 jobs at Bain, and when pressed for evidence, said he had done the math himself. At Monday night’s debate in South Carolina, Romney upped the ante, telling Fox News’ Bret Baier that he had created more than 120,000 jobs. Apparently it’d been a pretty good week.

But for all his talk, Romney has still failed to produce any credibile answer for how he arrived at any of the various jobs figures he’s tossed out. As I explained last week, the best answer we’ve seen is that his top aide, Eric Fehrnstrom, added up the jobs growth of a few of Bain’s most successful spinoffs (Sports Authority, Staples, etc.), and that was it. No consideration of the various Bain investments that lost jobs. No allowance for the fact that Romney is effectively taking credit for every job Staples has ever created—dare I say he invented office supplies?—even though Bain provided just 10 percent of the seed money for the company. No calculation, in other words; just an arbitrary number. It’s no surprise it fluctuates so much.

Romney wasn’t pressed on the source for his newest figure by the Fox panel, but don’t expect him to get off so easy. President Obama’s re-election team has already set its sights on the 100,000 figure. On Monday, they took to Tumblr—yes, they’re on Tumblr—to taunt Romney’s inconsistencies in chart form (click to enlarge): 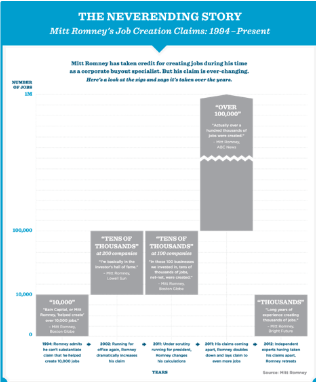 We’ll say this for former Pennsylvania senator Rick Santorum: He can surprise you from time to time. He was, for instance, the first and only GOP candidate to seize on a lack of income mobility as a serious problem in the United States, as he did at an October debate in Las Vegas. And at Monday’s to-do in South Carolina, Santorum attacked the front-runner on the unlikeliest issues in a deep-red, law-and-order southern state: felon voting rights.

Santorum raised the subject because the pro-Romney super-PAC “Restore Our Future” has recently released an ad statewide hitting Santorum for supposedly voting to allow felons to vote while still in prison. That’s false—Santorum voted to restore voting rights to felons only after they’ve left prison and had been restored all of their other rights—and he called Romney out of it. Then he asked a question: “I would ask Governor Romney, do you believe people who are felons, who have served their time, who have exhausted their parole and probation, should they be allowed to vote?”

Romney initially dodged the question, switching to his prepared defense of super-PACs. But Santorum pressed: “I’m asking you to answer the question…this is Martin Luther King Day. This is a huge deal in the African-American community because we have a very high rates of incarceration, disproportionately higher rates, particularly with drug crimes in the African-American community. The bill I voted for is the Martin Luther King voting rights bill.” Pressed again for an answer, Romney at last said he’d oppose restoring voting rights to anyone who has committed a violent crime.

And then Santorum played his trump card: While Romney was governor, Massachusetts had a policy of allowing felons to vote once they’d left prison—even while they were still on probation. Think Progress flagged the whole exchange, which you can watch below:

This isn’t likely to win Santorum any votes in South Carolina; if anything, it might still cost him a few—that’s why Romney’s super-PAC initially thought this was a winning issue. But it’s an issue that’s worth raising and one that candidates for presidents should be forced to take a stand on.

During the Fox News debate in South Carolina Monday night, Newt Gingrich took on a familiar target: liberal elites who routinely thumb their noses at hard work. When asked by moderator Juan Williams about his (arguably racially charged) statements on Barack Obama as the “food stamp president,” former front-runner Gingrich quickly rejected the accusations of race-baiting and pivoted to explaining one of his alternatives to government benefits.

Gingrich repeated his call to ease child labor laws in order to allow poor kids to work as, for example, school janitors—an idea that has its roots in Gingrich’s controversy-laden Earning by Learning program from the early ’90s. “Only elites despise earning money,” Gingrich said, as he accused the president of hating when poor but enterprising children tried to make their own money.

One thing Newt forgot to mention: President Obama’s American Jobs Act explicitly includes sections on summer, as well as year-round, jobs for kids in low-income families. The bill, which Gingrich derisively labeled as the “American Government Rebuilding Act”—would allot a grand total of $1.5 billion for programs that provide employment opportunities for youths. (Specifics can be found here.)

A billion and a half bucks is a funny way of showing how much you hate seeing kids earn their own lunch money.

At the Fox News/Wall Street Journal debate Monday night in South Carolina, GOP presidential frontrunner Mitt Romney made a breathtakingly bogus claim about President Obama’s jobs record. “We have a president in office three years,” Romney claimed, “and he does not have a jobs plan yet.”

Romney is either suffering from selective amnesia or is trying to dupe the public. Last fall, the president unveiled his American Jobs Act, a $447 billion package of tax cuts for businesses; funds to retain more teachers, cops, and firefighters; and money to hire construction workers to upgrade and retrofit public schools nationwide. The bill also included $50 billion for investing in America’s roads, bridges, rail lines, and other infrastructure. All the measures in the Jobs Act are intended to spur hiring and prevent layoffs throughout the American economy. Need more? Check out this entire website devoted to the Jobs Act.

In November, Senate Republicans blocked various pieces of the American Jobs Act on three separate occasions. Now, Obama says he’s going to try to implement job-creating measures on his own without sending legislation to Congress. But to claim that the president “does not have a jobs plan yet,” as Mitt Romney did on Monday night, couldn’t be further from the truth.